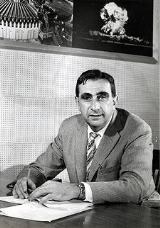 Overview
Edward Teller was a Hungarian-American
Hungarian American
Hungarian Americans Hungarian are American citizens of Hungarian descent. The constant influx of Hungarian immigrants was marked by several waves of sharp increase.-History:...
theoretical
Theoretical physics
Theoretical physics is a branch of physics which employs mathematical models and abstractions of physics to rationalize, explain and predict natural phenomena...
physicist
Physicist
A physicist is a scientist who studies or practices physics. Physicists study a wide range of physical phenomena in many branches of physics spanning all length scales: from sub-atomic particles of which all ordinary matter is made to the behavior of the material Universe as a whole...
, known colloquially as "the father of the hydrogen bomb," even though he did not care for the title. Teller made numerous contributions to nuclear
Nuclear physics
Nuclear physics is the field of physics that studies the building blocks and interactions of atomic nuclei. The most commonly known applications of nuclear physics are nuclear power generation and nuclear weapons technology, but the research has provided application in many fields, including those...
and molecular physics
Molecular physics
Molecular physics is the study of the physical properties of molecules, the chemical bonds between atoms as well as the molecular dynamics. Its most important experimental techniques are the various types of spectroscopy...
, spectroscopy
Spectroscopy
Spectroscopy is the study of the interaction between matter and radiated energy. Historically, spectroscopy originated through the study of visible light dispersed according to its wavelength, e.g., by a prism. Later the concept was expanded greatly to comprise any interaction with radiative...
(the Jahn–Teller and Renner–Teller effects), and surface
Surface
In mathematics, specifically in topology, a surface is a two-dimensional topological manifold. The most familiar examples are those that arise as the boundaries of solid objects in ordinary three-dimensional Euclidean space R3 — for example, the surface of a ball...
physics. His extension of Fermi's theory of beta decay
Beta decay
In nuclear physics, beta decay is a type of radioactive decay in which a beta particle is emitted from an atom. There are two types of beta decay: beta minus and beta plus. In the case of beta decay that produces an electron emission, it is referred to as beta minus , while in the case of a...
(in the form of the so-called Gamow–Teller transitions) provided an important stepping stone in the applications of this theory.

When and where was Eward Teller born?

Where did he work?

A fact is a simple statement that everyone believes. It is innocent, unless found guilty. A hypothesis is a novel suggestion that no one wants to believe. It is guilty, until found effective.

Two paradoxes are better than one; they may even suggest a solution.

My name is not Dr. Strangelove or: How I Learned to Stop Worrying and Love the Bomb|Strangelove. I don't know about Strangelove. I'm not interested in Strangelove. What else can I say?... Look. Say it three times more, and I throw you out of this office.

Quoted in "Infamy and honor at the Atomic Café : Edward Teller has no regrets about his contentious career" by Gary Stix in Scientific American (October 1999), p. 42-43

When you fight for a desperate cause and have good reasons to fight, you usually win.