Encyclopedia
The National Institute of Standards and Technology (NIST), known between 1901 and 1988 as the National Bureau of Standards (NBS), is a measurement standards laboratory, otherwise known as a National Metrological Institute (NMI), which is a non-regulatory agency of the United States Department of Commerce
United States Department of Commerce
The United States Department of Commerce is the Cabinet department of the United States government concerned with promoting economic growth. It was originally created as the United States Department of Commerce and Labor on February 14, 1903...
. The institute's official mission is to:
NIST had an operating budget
Budget
A budget is a financial plan and a list of all planned expenses and revenues. It is a plan for saving, borrowing and spending. A budget is an important concept in microeconomics, which uses a budget line to illustrate the trade-offs between two or more goods...
for fiscal year 2007 (October 1, 2006-September 30, 2007) of about $843.3 million. NIST's 2009 budget was $992 million, but it also received $610 million as part of the American Recovery and Reinvestment Act
American Recovery and Reinvestment Act of 2009
The American Recovery and Reinvestment Act of 2009, abbreviated ARRA and commonly referred to as the Stimulus or The Recovery Act, is an economic stimulus package enacted by the 111th United States Congress in February 2009 and signed into law on February 17, 2009, by President Barack Obama.To...
. NIST employs about 2,900 scientists, engineers, technicians, and support and administrative personnel. About 1,800 NIST associates (guest researchers and engineers from American companies and foreign nations) complement the staff. In addition, NIST partners with 1,400 manufacturing specialists and staff at nearly 350 affiliated centers around the country. NIST publishes the Handbook 44 that provides the "Specifications, tolerances, and other technical requirements for weighing and measuring devices".

In January 1790 President Washington
George Washington
George Washington was the dominant military and political leader of the new United States of America from 1775 to 1799. He led the American victory over Great Britain in the American Revolutionary War as commander-in-chief of the Continental Army from 1775 to 1783, and presided over the writing of...
, in his first annual message to Congress stated that, "Uniformity in the currency, weights, and measures of the United States is an object of great importance, and will, I am persuaded, be duly attended to", and ordered Secretary of State
Secretary of State
Secretary of State or State Secretary is a commonly used title for a senior or mid-level post in governments around the world. The role varies between countries, and in some cases there are multiple Secretaries of State in the Government....
Thomas Jefferson
Thomas Jefferson
Thomas Jefferson was the principal author of the United States Declaration of Independence and the Statute of Virginia for Religious Freedom , the third President of the United States and founder of the University of Virginia...
to prepare a plan for Establishing Uniformity in the Coinage, Weights, and Measures of the United States, afterwards referred to as the Jefferson report. On October 25,1791 Washington appealed a third time to Congress, "A uniformity of the weights and measures of the country is among the important objects submitted to you by the Constitution
Constitution
A constitution is a set of fundamental principles or established precedents according to which a state or other organization is governed. These rules together make up, i.e. constitute, what the entity is...
and if it can be derived from a standard at once invariable and universal, must be no less honorable to the public council than conducive to the public convenience." , but it was not until 1838 that a uniform set of standards was worked out.

From 1830 until 1901, the role of overseeing weights and measures was carried out by the Office of Standard Weights and Measures, which was part of the U.S. Treasury Department.

NIST is headquartered in Gaithersburg, Maryland
Gaithersburg, Maryland
Gaithersburg is a city in Montgomery County, Maryland, United States. The city had a population of 59,933 at the 2010 census, making it the fourth largest incorporated city in the state, behind Baltimore, Frederick, and Rockville...
, and operates a facility in Boulder, Colorado
Boulder, Colorado
Boulder is the county seat and most populous city of Boulder County and the 11th most populous city in the U.S. state of Colorado. Boulder is located at the base of the foothills of the Rocky Mountains at an elevation of...
. NIST's activities are organized into laboratory programs, and extramural programs. Effective October 1, 2010, NIST was realigned by reducing the number of NIST laboratory units from ten to six. NIST Laboratories include:

NIST also operates a neutron
Neutron source
A Neutron source is a device that emits neutrons. There is a wide variety of different sources, ranging from hand-held radioactive sources to neutron research facilities operating research reactors and spallation sources...
science user facility: the NIST Center for Neutron Research (NCNR). The NCNR provides scientists access to a variety of neutron scattering
Neutron scattering
Neutron scattering,the scattering of free neutrons by matter,is a physical processand an experimental technique using this processfor the investigation of materials.Neutron scattering as a physical process is of primordial importance...
instruments, which are used in many fields of research (materials science, fuel cells, biotechnology, etc.).

The Center for Nanoscale Science and Technology (CNST) performs research in nanotechnology
Nanotechnology
Nanotechnology is the study of manipulating matter on an atomic and molecular scale. Generally, nanotechnology deals with developing materials, devices, or other structures possessing at least one dimension sized from 1 to 100 nanometres...
, both through internal research efforts and by running a user-accessible cleanroom
Cleanroom
A cleanroom is an environment, typically used in manufacturing or scientific research, that has a low level of environmental pollutants such as dust, airborne microbes, aerosol particles and chemical vapors. More accurately, a cleanroom has a controlled level of contamination that is specified by...
nanomanufacturing facility. This 'NanoFab' is equipped with tools for lithographic
Lithography
Lithography is a method for printing using a stone or a metal plate with a completely smooth surface...
patterning and imaging (e.g. electron microscopes and atomic force microscope
Atomic force microscope
Atomic force microscopy or scanning force microscopy is a very high-resolution type of scanning probe microscopy, with demonstrated resolution on the order of fractions of a nanometer, more than 1000 times better than the optical diffraction limit...
s). 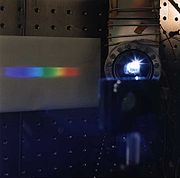 As part of its mission, NIST supplies industry, academia, government, and other users with over 1,300 Standard Reference Materials (SRMs). These artifacts are certified as having specific characteristics or component content, used as calibration standards for measuring equipment and procedures, quality control benchmarks for industrial processes, and experimental control samples.

NIST is currently developing government-wide identification card
Identity document
An identity document is any document which may be used to verify aspects of a person's personal identity. If issued in the form of a small, mostly standard-sized card, it is usually called an identity card...
standards for federal employees and contractors to prevent unauthorized persons from gaining access to government buildings and computer systems.

In 2002 the National Construction Safety Team Act mandated NIST to conduct an investigation into the collapse of the World Trade Center
World Trade Center
The original World Trade Center was a complex with seven buildings featuring landmark twin towers in Lower Manhattan, New York City, United States. The complex opened on April 4, 1973, and was destroyed in 2001 during the September 11 attacks. The site is currently being rebuilt with five new...
buildings 1 and 2 and the 47-story 7 World Trade Center
7 World Trade Center
7 World Trade Center is a building in New York City located across from the World Trade Center site in Lower Manhattan. It is the second building to bear that name and address in that location. The original structure was completed in 1987 and was destroyed in the September 11 attacks...
. The "World Trade Center Collapse Investigation", directed by lead investigator Shyam Sunder, covered three aspects, including a technical building and fire safety
Fire safety
Fire safety refers to precautions that are taken to prevent or reduce the likelihood of a fire that may result in death, injury, or property damage, alert those in a structure to the presence of a fire in the event one occurs, better enable those threatened by a fire to survive, or to reduce the...
investigation to study the factors contributing to the probable cause of the collapses of the WTC Towers (WTC 1 and 2) and WTC 7. NIST also established a research and development program to provide the technical basis for improved building and fire codes, standards, and practices, and a dissemination and technical assistance program to engage leaders of the construction and building community in implementing proposed changes to practices, standards, and codes. NIST also is providing practical guidance and tools to better prepare facility owners, contractors, architects, engineers, emergency responders, and regulatory authorities to respond to future disasters. The investigation portion of the response plan was completed with the release of the final report on 7 World Trade Center on November 20, 2008. The final report on the WTC Towers – including 30 recommendations for improving building and occupant safety – was released on October 26, 2005.

SAMATE (Software Assurance Metrics And Tool Evaluation) is a NIST project focused on improving software assurance by developing methods to enable software tool evaluations, measuring the effectiveness of tools and techniques, and identifying gaps in tools and methods.


NBS Director Allen V. Astin is the father of actor John Astin
John Astin
John Allen Astin is an American actor who has appeared in numerous films and television shows, and is best known for the role of Gomez Addams on The Addams Family, and other similarly eccentric comedic characters.-Early years:...
and the grandfather of actor Sean Astin
Sean Astin
Sean Astin is an American film actor, director, voice artist, and producer better known for his film roles as Mikey Walsh in The Goonies, the title character of Rudy, and Samwise Gamgee in the Lord of the Rings trilogy. In television, he appeared as Lynn McGill in the fifth season of 24...
.