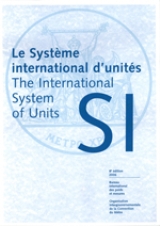 It is the world's most widely used system of measurement
Systems of measurement
A system of measurement is a set of units which can be used to specify anything which can be measured and were historically important, regulated and defined because of trade and internal commerce...
, which is used both in everyday commerce
Commerce
While business refers to the value-creating activities of an organization for profit, commerce means the whole system of an economy that constitutes an environment for business. The system includes legal, economic, political, social, cultural, and technological systems that are in operation in any...
and in science
Science
Science is a systematic enterprise that builds and organizes knowledge in the form of testable explanations and predictions about the universe...
.

Why was the International System of Units developed
More
x