Encyclopedia
The American Recovery and Reinvestment Act of 2009, abbreviated ARRA and commonly referred to as the Stimulus or The Recovery Act, is an economic stimulus package enacted by the 111th United States Congress in February 2009 and signed into law on February 17, 2009, by President Barack Obama
Barack Obama
Barack Hussein Obama II is the 44th and current President of the United States. He is the first African American to hold the office. Obama previously served as a United States Senator from Illinois, from January 2005 until he resigned following his victory in the 2008 presidential election.Born in...
.

To respond to the late-2000s recession, the primary objective for ARRA was to save and create jobs almost immediately. Secondary objectives were to provide temporary relief programs for those most impacted by the recession and invest in infrastructure, education, health, and ‘green’ energy. The approximate cost of the economic stimulus package was estimated to be $787 billion at the time of passage. The Act included direct spending in infrastructure
Infrastructure
Infrastructure is basic physical and organizational structures needed for the operation of a society or enterprise, or the services and facilities necessary for an economy to function...
, education, health, and energy, federal tax incentives, and expansion of unemployment benefits and other social welfare provisions. The Act also included many items not directly related to economic recovery such as long-term spending projects (e.g., a study of the effectiveness of medical treatments) and other items specifically included by Congress (e.g., a limitation on executive compensation in federally aided banks added by Senator Dodd
Christopher Dodd
Christopher John "Chris" Dodd is an American lawyer, lobbyist, and Democratic Party politician who served as a United States Senator from Connecticut for a thirty-year period ending with the 111th United States Congress....
and Rep. Frank
Barney Frank
Barney Frank is the U.S. Representative for . A member of the Democratic Party, he is the former chairman of the House Financial Services Committee and is considered the most prominent gay politician in the United States.Born and raised in New Jersey, Frank graduated from Harvard College and...
).

Both the House and the Senate versions of the bills were primarily written by Democratic Congressional committee leaders and their staffs. Because work on the bills started before President Obama officially took office on January 20, 2009, top aides to President-Elect Obama held multiple meetings with committee leaders and staffers. On January 10, 2009, President-Elect Obama’s administration released a report that provided a preliminary analysis of the impact to jobs of some of the prototypical recovery packages that were being considered.

On January 28, 2009, the House passed the bill by a 244-188 vote. All but 11 Democrats voted for the bill, and 177 Republicans
Republican Party (United States)
The Republican Party is one of the two major contemporary political parties in the United States, along with the Democratic Party. Founded by anti-slavery expansion activists in 1854, it is often called the GOP . The party's platform generally reflects American conservatism in the U.S...
voted against it (two Republicans did not vote).

The senate version of the bill, , was introduced on January 6, 2009, and later substituted as an amendment to the House bill, . It was sponsored by Harry Reid
Harry Reid
Harry Mason Reid is the senior United States Senator from Nevada, serving since 1987. A member of the Democratic Party, he has been the Senate Majority Leader since January 2007, having previously served as Minority Leader and Minority and Majority Whip.Previously, Reid was a member of the U.S...
, the Majority Leader, co-sponsored by 16 other Democrats and Joe Lieberman
Joe Lieberman
Joseph Isadore "Joe" Lieberman is the senior United States Senator from Connecticut. A former member of the Democratic Party, he was the party's nominee for Vice President in the 2000 election. Currently an independent, he remains closely affiliated with the party.Born in Stamford, Connecticut,...
, an independent
Independent (politician)
In politics, an independent or non-party politician is an individual not affiliated to any political party. Independents may hold a centrist viewpoint between those of major political parties, a viewpoint more extreme than any major party, or they may have a viewpoint based on issues that they do...
who caucuses with the Democrats
Democratic Caucus of the United States Senate
The Senate Democratic Caucus is the formal organization of the current 51 Democratic Senators in the United States Senate. In the 112th Congress, the Democratic Caucus additionally includes two independent senators who formally caucus with the Democrats for the purpose of committee assignments...
.

The Senate then began consideration of the bill starting with the $275 billion tax provisions in the week of February 2, 2009.
A significant difference between the House version and the Senate version was the inclusion of a one-year extension of revisions to the alternative minimum tax
Alternative Minimum Tax
The Alternative Minimum Tax is an income tax imposed by the United States federal government on individuals, corporations, estates, and trusts. AMT is imposed at a nearly flat rate on an adjusted amount of taxable income above a certain threshold . This exemption is substantially higher than the...
which added $70 billion to the bill's total.

Republicans proposed several amendments to the bill directed at increasing the share of tax cuts and downsizing spending as well as decreasing the overall price.
President Obama and Senate Democrats hinted that they would be willing to compromise on Republican suggestions to increase infrastructure spending and to double the housing tax credit proposed from $7,500 to $15,000 and expand its application to all home buyers, not just first-time buyers.
Other considered amendments included the Freedom Act of 2009, an amendment proposed by Senate Finance Committee members Maria Cantwell
Maria Cantwell
Maria E. Cantwell is the junior United States Senator from the state of Washington and a member of the Democratic Party....
(D) and Orrin Hatch
Orrin Hatch
Orrin Grant Hatch is the senior United States Senator for Utah and is a member of the Republican Party. Hatch served as the chairman or ranking member of the Senate Judiciary Committee from 1993 to 2005...
(R) to include tax incentives for plug-in electric vehicles
Battery electric vehicle
A battery electric vehicle, or BEV, is a type of electric vehicle that uses chemical energy stored in rechargeable battery packs. BEVs use electric motors and motor controllers instead of, or in addition to, internal combustion engines for propulsion.A battery-only electric vehicle or...

and an amendment proposed by Jim DeMint
Jim DeMint
James Warren "Jim" DeMint is the junior U.S. Senator from South Carolina, serving since 2005. He is a member of the Republican Party and a leader in the Tea Party movement. He previously served as the U.S. Representative for from 1999 to 2005.-Early life and education:DeMint was born in...
(R) to remove language from the bill that would prohibit funds which would be "used for sectarian instruction, religious worship, or a school or department of divinity; or in which a substantial portion of the functions of the facilities are subsumed in a religious mission".

The Senate called a special Saturday debate session for February 7 at the urging of President Obama. The Senate voted, 61-36 (with 2 not voting) on February 9 to end debate on the bill and advance it to the Senate floor to vote on the bill itself. On February 10, the Senate voted 61-37 (with one not voting)
All the Democrats voted in favor, but only three Republicans voted in favor (Susan Collins
Susan Collins
Susan Margaret Collins is the junior United States Senator from Maine and a member of the Republican Party. First elected to the Senate in 1996, she is the ranking member of the Senate Committee on Homeland Security and Governmental Affairs...
, Olympia Snowe
Olympia Snowe
Olympia Jean Snowe , née Bouchles, is the senior United States Senator from Maine and a member of the Republican Party. Snowe has become widely known for her ability to influence the outcome of close votes, including whether to end filibusters. She and her fellow Senator from Maine, Susan Collins,...
, and Arlen Specter
Arlen Specter
Arlen Specter is a former United States Senator from Pennsylvania. Specter is a Democrat, but was a Republican from 1965 until switching to the Democratic Party in 2009...
), with Specter later switching to the Democratic party. At one point, the Senate bill stood at $838 billion.


Comparison of the House, Senate and Conference versions 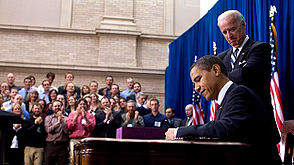 Senate Republicans forced a near unprecedented level of changes (near $150 billion) in the House bill which had more closely followed the Obama plan. The biggest losers were states (severely restricted Stabilization Fund) and the low income workers (reduced tax credit) with major gains for the elderly (largely left out of the Obama and House plans) and high income tax-payers. A comparison of the $827 billion economic recovery plan drafted by Senate Democrats with a $820 billion version passed by the House and the final $787 billion conference version shows huge shifts within these similar totals. Additional debt costs would add about $350 billion or more over 10 years. Many provisions will expire in two years.

Congressional negotiators that they had completed the Conference Report on February 11. On February 12, House Majority Leader Steny Hoyer
Steny Hoyer
Steny Hamilton Hoyer is the U.S. Representative for , serving since 1981. The district includes a large swath of rural and suburban territory southeast of Washington, D.C.. He is a member of the Democratic Party....
scheduled the vote on the bill for the next day, before wording on the bill's content had been completed and despite House Democrats having previously promised to allow a 48-hour public review period before any vote. The Report with final handwritten provisions was posted on a House website that evening. On February 13, the Report passed the House, 246-183, largely along party lines with all 246 Yes votes given by Democrats and the Nay vote split between 176 Republicans and 7 Democrats.

The Senate passed the bill, 60-38, with all Democrats and Independents voting for the bill along with three Republicans. On February 17, 2009, President Barack Obama signed the Recovery Act into law.


Provisions of the Act