Encyclopedia
Fire safety refers to precautions that are taken to prevent or reduce the likelihood of a fire
Fire
Fire is the rapid oxidation of a material in the chemical process of combustion, releasing heat, light, and various reaction products. Slower oxidative processes like rusting or digestion are not included by this definition....
that may result in death, injury, or property damage, alert those in a structure to the presence of a fire in the event one occurs, better enable those threatened by a fire to survive, or to reduce the damage caused by a fire. Fire safety measures include those that are planned during the construction
Construction
In the fields of architecture and civil engineering, construction is a process that consists of the building or assembling of infrastructure. Far from being a single activity, large scale construction is a feat of human multitasking...
of a building or implemented in structures that are already standing, and those that are taught to occupants of the building.

Threats to fire safety are referred to as fire hazards. A fire hazard may include a situation that increases the likelihood a fire may start or may impede escape
Fire escape
A fire escape is a special kind of emergency exit, usually mounted to the outside of a building or occasionally inside but separate from the main areas of the building. It provides a method of escape in the event of a fire or other emergency that makes the stairwells inside a building inaccessible...
in the event a fire occurs.

Fire safety is often a component of building safety
Building code
A building code, or building control, is a set of rules that specify the minimum acceptable level of safety for constructed objects such as buildings and nonbuilding structures. The main purpose of building codes are to protect public health, safety and general welfare as they relate to the...
. Those who inspect buildings for violations of the Fire Code and go into schools to educate children on Fire Safety topics are fire department members known as fire prevention officers. The Chief Fire Prevention Officer or Chief of Fire Prevention will normally train newcomers to the Fire Prevention Division and may also conduct inspections or make presentations. 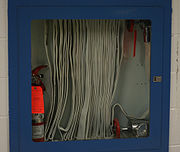 Examples of these include: 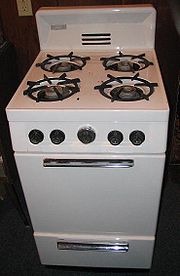 Some common fire hazards are:

In America, the Fire code (also Fire prevention code or Fire safety code) is a model code adopted by the state or local jurisdiction and enforced by fire prevention officers within municipal fire department
Fire department
A fire department or fire brigade is a public or private organization that provides fire protection for a certain jurisdiction, which typically is a municipality, county, or fire protection district...
s. It is a set of rules prescribing minimum requirements to prevent fire and explosion hazards arising from storage, handling, or use of dangerous materials, or from other specific hazardous conditions. It complements the building code
Building code
A building code, or building control, is a set of rules that specify the minimum acceptable level of safety for constructed objects such as buildings and nonbuilding structures. The main purpose of building codes are to protect public health, safety and general welfare as they relate to the...
. The fire code is aimed primarily at preventing fires, ensuring that necessary training and equipment will be on hand, and that the original design basis of the building, including the basic plan set out by the architect
Architect
An architect is a person trained in the planning, design and oversight of the construction of buildings. To practice architecture means to offer or render services in connection with the design and construction of a building, or group of buildings and the space within the site surrounding the...
, is not compromised. The fire code also addresses inspection and maintenance requirements of various fire protection
Fire protection
Fire protection is the study and practice of mitigating the unwanted effects of fires. It involves the study of the behaviour, compartmentalisation, suppression and investigation of fire and its related emergencies, as well as the research and development, production, testing and application of...
equipment in order to maintain optimal active fire protection
Active fire protection
Active fire protection is an integral part of fire protection. AFP is characterised by items and/or systems, which require a certain amount of motion and response in order to work, contrary to passive fire protection.-Fire suppression:...
and passive fire protection
Passive fire protection
Passive fire protection is an integral component of the three components of structural fire protection and fire safety in a building. PFP attempts to contain fires or slow the spread, through use of fire-resistant walls, floors, and doors...
measures.

A typical fire safety code includes administrative sections about the rule-making and enforcement process, and substantive sections dealing with fire suppression equipment, particular hazards such as containers and transportation for combustible materials, and specific rules for hazardous occupancies, industrial processes, and exhibitions.

Sections may establish the requirements for obtaining permits and specific precautions required to remain in compliance with a permit. For example, a fireworks exhibition may require an application to be filed by a licensed pyrotechnician, providing the information necessary for the issuing authority to determine whether safety requirements can be met. Once a permit is issued, the same authority (or another delegated authority) may inspect the site and monitor safety during the exhibition, with the power to halt operations, when unapproved practices are seen or when unforeseen hazards arise.

Fire prevention
Fire prevention
Fire Prevention is a function of many fire departments. The goal of fire prevention is to educate the public to take precautions to prevent fires, and be educated about surviving them. It is a proactive method of reducing emergencies and the damage caused by them. Many fire departments have a Fire...
programs may include distribution of smoke detector
Smoke detector
A smoke detector is a device that detects smoke, typically as an indicator of fire. Commercial, industrial, and mass residential devices issue a signal to a fire alarm system, while household detectors, known as smoke alarms, generally issue a local audible and/or visual alarm from the detector...
s, visiting schools to review key topics with the students and implementing nationally recognized programs such as NFPAs "Risk Watch" & "Learn not to burn."

Other programs or props can be purchased by fire departments or community organizations. These are usually entertaining and designed to capture children's attention and relay important messages. Props include those that are mostly auditory, such as puppets & robots. The prop is visually stimulating but the safety message is only transmitted orally. Other props are more elaborate, access more senses and increase the learning factor. They mix audio messages and visual queues with hands-on interaction. Examples of these include mobile trailer safety houses and tabletop hazard house simulators. Some fire prevention software is also being developed to identify hazards in a home..

All programs tend to mix messages of general injury prevention, safety, fire prevention and escape in case of fire. In most cases the fire department representative is regarded as the expert and is expected to present information in a manner that is appropriate for each age group.

The US industry standard that outlines the recommended qualifications for fire safety educators is NFPA 1035: Standard for Professional Qualifications for Public Fire and Life Safety Educator, 2005 Edition. This standard is currently being revised and the newest edition is slated for release in 2010. According to NFPA, 1035 specifically covers the requirements for Fire and Life Safety Educator Levels I, II, and III; Public Information Officer; and Juvenile Firesetter Intervention Specialist Levels I and II.