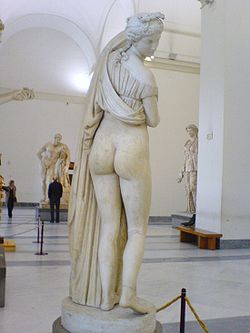 The Naples National Archaeological Museum (Museo Archeologico Nazionale di Napoli) is a museum in Naples
Naples
Naples is a city in Southern Italy, situated on the country's west coast by the Gulf of Naples. Lying between two notable volcanic regions, Mount Vesuvius and the Phlegraean Fields, it is the capital of the region of Campania and of the province of Naples...
, southern Italy
Italy
Italy , officially the Italian Republic languages]] under the European Charter for Regional or Minority Languages. In each of these, Italy's official name is as follows:;;;;;;;;), is a unitary parliamentary republic in South-Central Europe. To the north it borders France, Switzerland, Austria and...
, at the northwest corner of the original Greek wall of the city of Neapolis. The museum contains a large collection of Roman artifact
Artifact (archaeology)
An artifact or artefact is "something made or given shape by man, such as a tool or a work of art, esp an object of archaeological interest"...
s from Pompeii
Pompeii
The city of Pompeii is a partially buried Roman town-city near modern Naples in the Italian region of Campania, in the territory of the comune of Pompei. Along with Herculaneum, Pompeii was destroyed and completely buried during a long catastrophic eruption of the volcano Mount Vesuvius spanning...
, Stabiae
Stabiae
Stabiae was an ancient Roman town, located close to the modern town of Castellammare di Stabia approximately 4.5 km southwest of Pompeii. It was positioned on a 50 m high headland overlooking the Gulf of Naples...
and Herculaneum
Herculaneum
Herculaneum was an ancient Roman town destroyed by volcanic pyroclastic flows in AD 79, located in the territory of the current commune of Ercolano, in the Italian region of Campania in the shadow of Mt...
. The collection includes works of the highest quality produced in Greek
Ancient Greece
Ancient Greece is a civilization belonging to a period of Greek history that lasted from the Archaic period of the 8th to 6th centuries BC to the end of antiquity. Immediately following this period was the beginning of the Early Middle Ages and the Byzantine era. Included in Ancient Greece is the...
, Roman
Ancient Rome
Ancient Rome was a thriving civilization that grew on the Italian Peninsula as early as the 8th century BC. Located along the Mediterranean Sea and centered on the city of Rome, it expanded to one of the largest empires in the ancient world....
and Renaissance
Renaissance
The Renaissance was a cultural movement that spanned roughly the 14th to the 17th century, beginning in Italy in the Late Middle Ages and later spreading to the rest of Europe. The term is also used more loosely to refer to the historical era, but since the changes of the Renaissance were not...
times. It is the most important Italian archaeological museum.

The museum hosts extensive collections of Greek and Roman antiquities. Their core is from the Farnese Collection, which includes a collection of engraved gems (including the Farnese Cup
Farnese Cup
The Farnese Cup is a 2nd century BC cameo cup of Hellenistic Egypt in four-layered sardonyx agate. It is 20 cm wide.-History:...
, a Ptolemaic bowl made of sardonyx agate
Agate
Agate is a microcrystalline variety of silica, chiefly chalcedony, characterised by its fineness of grain and brightness of color. Although agates may be found in various kinds of rock, they are classically associated with volcanic rocks and can be common in certain metamorphic rocks.-Etymology...
and the most famous piece in the "Treasure of the Magnificent", and is founded upon gems collected by Cosimo de' Medici
Cosimo de' Medici
Còsimo di Giovanni degli Mèdici was the first of the Medici political dynasty, de facto rulers of Florence during much of the Italian Renaissance; also known as "Cosimo 'the Elder'" and "Cosimo Pater Patriae" .-Biography:Born in Florence, Cosimo inherited both his wealth and his expertise in...
and Lorenzo il Magnifico in the 15th century) and the Farnese Marbles.

Charles III of Spain
Charles III of Spain
Charles III was the King of Spain and the Spanish Indies from 1759 to 1788. He was the eldest son of Philip V of Spain and his second wife, the Princess Elisabeth Farnese...
founded the museum in the 1750s. The building he used for it had been erected as a cavalry barracks and during its time as the seat of the University of Naples (from 1616 to 1777) was extended, in the late 18th century.

Among the notable works found in the museum are:

The greater part of the museum's classical sculpture collection largely comes from the Farnese Marbles, important since they include Roman copies of classical Greek sculpture, which are in many cases the only surviving indications of what the lost works by ancient Greek sculptors such as Calamis, Kritios
Kritios
Kritios was an Athenian sculptor, probably a pupil of Antenor, working in the early 5th century BCE, whose manner is on the cusp of the Late Archaic and the Severe style of Early Classicism in Attica. He was the teacher of Myron...
and Nesiotes looked like. Many of these works, especially the larger ones, have been moved to the Museo di Capodimonte
Museo di Capodimonte
The National Museum of Capodimonte is located in the Palace of Capodimonte, a grand Bourbon palazzo in Naples, Italy. The museum is the prime repository of Neapolitan painting and decorative art, with several important works from other Italian schools of painting, and some important Ancient Roman...
for display in recent years.

The museum's Mosaic Collection includes a number of important mosaic
Mosaic
Mosaic is the art of creating images with an assemblage of small pieces of colored glass, stone, or other materials. It may be a technique of decorative art, an aspect of interior decoration, or of cultural and spiritual significance as in a cathedral...
s recovered from the ruins of Pompeii
Pompeii
The city of Pompeii is a partially buried Roman town-city near modern Naples in the Italian region of Campania, in the territory of the comune of Pompei. Along with Herculaneum, Pompeii was destroyed and completely buried during a long catastrophic eruption of the volcano Mount Vesuvius spanning...
and the other Vesuvian cities.

The museum has the third largest collection of Egyptian artifacts
Ancient Egypt
Ancient Egypt was an ancient civilization of Northeastern Africa, concentrated along the lower reaches of the Nile River in what is now the modern country of Egypt. Egyptian civilization coalesced around 3150 BC with the political unification of Upper and Lower Egypt under the first pharaoh...
in Italy, after the Vatican Museum and the Museo Egizio
Museo Egizio
The Museo Egizio is a museum in Turin, Italy, specialising in Egyptian archaeology and anthropology. It houses the world's largest and most comprehensive collection of Egyptian antiquities outside the Egyptian Museum in Cairo...
in Turin
Turin
Turin is a city and major business and cultural centre in northern Italy, capital of the Piedmont region, located mainly on the left bank of the Po River and surrounded by the Alpine arch. The population of the city proper is 909,193 while the population of the urban area is estimated by Eurostat...
. It is made up primarily of works from two private collections, assembled by Cardinal Borgia
Borgia
The Borgias, also known as the Borjas, Borjia, were a European Papal family of Italian and Spanish origin with the name stemming from the familial fief seat of Borja belonging to their Aragonese Lords; they became prominent during the Renaissance. The Borgias were patrons of the arts, and their...
in the second half of the 18th century, and Picchianti in the first years of the 19th. In the recent rearrangement of the galleries the two nuclei have been exhibited separately, while in the connecting room other items are on display, including Egyptian and "pseudo-Egyptian" artefacts from Pompeii and other Campanian sites. In its new layout the collection provides both an important record of Egyptian civilization from the Old Kingdom (2700-2200 B.C.) up to the Ptolemaic-Roman era.