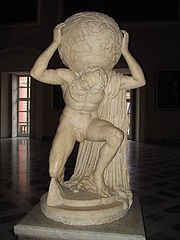 The Farnese Atlas is a 2nd-century Roman marble copy of a Hellenistic sculpture
Sculpture
Sculpture is three-dimensional artwork created by shaping or combining hard materials—typically stone such as marble—or metal, glass, or wood. Softer materials can also be used, such as clay, textiles, plastics, polymers and softer metals...
of Atlas
Atlas (mythology)
In Greek mythology, Atlas was the primordial Titan who supported the heavens. Although associated with various places, he became commonly identified with the Atlas Mountains in north-west Africa...
kneeling with a globe
Globe
A globe is a three-dimensional scale model of Earth or other spheroid celestial body such as a planet, star, or moon...
weighing heavily on his shoulders. It is the oldest extant statue of the Titan
Titan (mythology)
In Greek mythology, the Titans were a race of powerful deities, descendants of Gaia and Uranus, that ruled during the legendary Golden Age....
of Greek mythology
Greek mythology
Greek mythology is the body of myths and legends belonging to the ancient Greeks, concerning their gods and heroes, the nature of the world, and the origins and significance of their own cult and ritual practices. They were a part of religion in ancient Greece...
, who is represented in earlier vase-painting, and more important, the oldest known representation of the celestial sphere
Celestial sphere
In astronomy and navigation, the celestial sphere is an imaginary sphere of arbitrarily large radius, concentric with the Earth and rotating upon the same axis. All objects in the sky can be thought of as projected upon the celestial sphere. Projected upward from Earth's equator and poles are the...
. The sculpture is at the National Archaeological Museum (Museo Archeologico Nazionale)http://www.cib.na.cnr.it/remuna/mann/mann.html in Naples, Italy. It stands seven feet (2.1 meters) tall, and the globe is 65 cm in diameter.

The name Farnese Atlas reflects its acquisition by Cardinal Alessandro Farnese in the early 16th century, and its subsequent exhibition in the Villa Farnese
Villa Farnese
The Villa Farnese, also known as Villa Caprarola, is a mansion in the town of Caprarola in the province of Viterbo, Northern Lazio, Italy, approximately 50 kilometres north-west of Rome...
.

Atlas
Atlas (mythology)
In Greek mythology, Atlas was the primordial Titan who supported the heavens. Although associated with various places, he became commonly identified with the Atlas Mountains in north-west Africa...
labors under the weight because he had been sentenced by Zeus
Zeus
In the ancient Greek religion, Zeus was the "Father of Gods and men" who ruled the Olympians of Mount Olympus as a father ruled the family. He was the god of sky and thunder in Greek mythology. His Roman counterpart is Jupiter and his Etruscan counterpart is Tinia.Zeus was the child of Cronus...
to hold up the sky. The globe shows a depiction of the night sky as seen from outside the outermost celestial sphere
Celestial sphere
In astronomy and navigation, the celestial sphere is an imaginary sphere of arbitrarily large radius, concentric with the Earth and rotating upon the same axis. All objects in the sky can be thought of as projected upon the celestial sphere. Projected upward from Earth's equator and poles are the...
, with low reliefs depicting 41 (some sources say 42) of the 48 classical Greek constellation
Constellation
In modern astronomy, a constellation is an internationally defined area of the celestial sphere. These areas are grouped around asterisms, patterns formed by prominent stars within apparent proximity to one another on Earth's night sky....
s distinguished by Ptolemy
Ptolemy
Claudius Ptolemy , was a Roman citizen of Egypt who wrote in Greek. He was a mathematician, astronomer, geographer, astrologer, and poet of a single epigram in the Greek Anthology. He lived in Egypt under Roman rule, and is believed to have been born in the town of Ptolemais Hermiou in the...
, including; Aries
Aries (constellation)
Aries is one of the constellations of the zodiac, located between Pisces to the west and Taurus to the east. Its name is Latin for ram, and its symbol is , representing a ram's horns...
the ram, Cygnus
Cygnus (constellation)
Cygnus is a northern constellation lying on the plane of the Milky Way. Its name is the Latinized Hellenic word for swan. One of the most recognizable constellations of the northern summer and autumn, it features a prominent asterism known as the Northern Cross...
the swan and Hercules
Hercules
Hercules is the Roman name for Greek demigod Heracles, son of Zeus , and the mortal Alcmene...
the hero. The Farnese Atlas is the oldest surviving pictorial record of Western constellations. It dates to Roman
Ancient Rome
Ancient Rome was a thriving civilization that grew on the Italian Peninsula as early as the 8th century BC. Located along the Mediterranean Sea and centered on the city of Rome, it expanded to one of the largest empires in the ancient world....
times, around AD 150
150
Year 150 was a common year starting on Wednesday of the Julian calendar. At the time, it was known as the Year of the Consulship of Squilla and Vetus...
, but has long been presumed to represent constellations mapped in earlier Greek
Hellenistic Greece
In the context of Ancient Greek art, architecture, and culture, Hellenistic Greece corresponds to the period between the death of Alexander the Great in 323 BC and the annexation of the classical Greek heartlands by Rome in 146 BC...
work.

In 2005, at a meeting of the American Astronomical Society
American Astronomical Society
The American Astronomical Society is an American society of professional astronomers and other interested individuals, headquartered in Washington, DC...
in San Diego, California
San Diego, California
San Diego is the eighth-largest city in the United States and second-largest city in California. The city is located on the coast of the Pacific Ocean in Southern California, immediately adjacent to the Mexican border. The birthplace of California, San Diego is known for its mild year-round...
, Dr. Bradley E. Schaefer
Bradley E. Schaefer
Dr. Bradley E. Schaefer is a professor of astronomy and astrophysics at Louisiana State University. He received his PhD from the Massachusetts Institute of Technology in 1983....
, a professor of physics
Physics
Physics is a natural science that involves the study of matter and its motion through spacetime, along with related concepts such as energy and force. More broadly, it is the general analysis of nature, conducted in order to understand how the universe behaves.Physics is one of the oldest academic...
at Louisiana State University
Louisiana State University
Louisiana State University and Agricultural and Mechanical College, most often referred to as Louisiana State University, or LSU, is a public coeducational university located in Baton Rouge, Louisiana. The University was founded in 1853 in what is now known as Pineville, Louisiana, under the name...
, presented a widely reported analysis concluding that the text of Hipparchus
Hipparchus
Hipparchus, the common Latinization of the Greek Hipparkhos, can mean:* Hipparchus, the ancient Greek astronomer** Hipparchic cycle, an astronomical cycle he created** Hipparchus , a lunar crater named in his honour...
' long lost star catalog may have been the inspiration for the representation of the constellations on the globe, thereby reviving and expanding an earlier proposal by Georg Thiele (1898). The constellations are fairly detailed and Schaefer regards them as scientifically accurate given the period of the globe's creation, implying that it was modeled after a scholarly work. His statistical analysis concludes that the positions of these constellations are consistent with where they would have appeared in the time of Hipparchus (129 BC) - leading to the conclusion that the statue is based on the star catalog.

However, because the globe contains no actual stars, and because the circles on the globe are drawn inexactly and ambiguously by a sculptor copying the Hellenistic model rather than by an astronomer, the dating of the globe is still uncertain and its source or sources remain controversial; Schaefer's conclusions have been strongly contested (e.g., Dennis Duke, Journal for the History of Astronomy, February, 2006) most particularly on the ground that regardless of the globe's date the constellations on it show large disagreements with the only existing work by Hipparchus.