Encyclopedia
An artifact or artefact is "something made or given shape by man, such as a tool or a work of art, esp an object of archaeological interest". "Artifact" is the usual spelling in the US and Canada, "Artefact" in the UK, Europe and Australasia (see spelling differences).

In archaeology
Archaeology
Archaeology, or archeology , is the study of human society, primarily through the recovery and analysis of the material culture and environmental data that they have left behind, which includes artifacts, architecture, biofacts and cultural landscapes...
, where the term is most commonly used, an artifact is an object recovered by some archaeological endeavor, which may have a cultural
Archaeological culture
An archaeological culture is a recurring assemblage of artifacts from a specific time and place, which are thought to constitute the material culture remains of a particular past human society. The connection between the artifacts is based on archaeologists' understanding and interpretation and...
interest.

Examples include stone tool
Stone tool
A stone tool is, in the most general sense, any tool made either partially or entirely out of stone. Although stone tool-dependent societies and cultures still exist today, most stone tools are associated with prehistoric, particularly Stone Age cultures that have become extinct...
s such as projectile point
Projectile point
In archaeological terms, a projectile point is an object that was hafted to a projectile, such as a spear, dart, or arrow, or perhaps used as a knife....
s, pottery
Pottery
Pottery is the material from which the potteryware is made, of which major types include earthenware, stoneware and porcelain. The place where such wares are made is also called a pottery . Pottery also refers to the art or craft of the potter or the manufacture of pottery...
vessels, metal objects such as guns, and items of personal adornment such as buttons, jewellery
Jewellery
Jewellery or jewelry is a form of personal adornment, such as brooches, rings, necklaces, earrings, and bracelets.With some exceptions, such as medical alert bracelets or military dog tags, jewellery normally differs from other items of personal adornment in that it has no other purpose than to...
and clothing. Other examples include bone
Bone
Bones are rigid organs that constitute part of the endoskeleton of vertebrates. They support, and protect the various organs of the body, produce red and white blood cells and store minerals. Bone tissue is a type of dense connective tissue...
that show signs of human modification, fire cracked rocks from a hearth
Hearth
In common historic and modern usage, a hearth is a brick- or stone-lined fireplace or oven often used for cooking and/or heating. For centuries, the hearth was considered an integral part of a home, often its central or most important feature...
or plant material used for food. 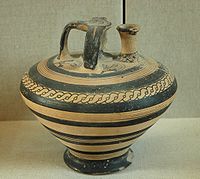 
Artifacts are distinguished from the main body of the archaeological record such as stratigraphic feature
Feature (archaeology)
Feature in archaeology and especially excavation has several different but allied meanings. A feature is a collection of one or more contexts representing some human non-portable activity that generally has a vertical characteristic to it in relation to site stratigraphy. Examples of features are...
s, which are non-portable remains of human activity, such as hearth
Hearth
In common historic and modern usage, a hearth is a brick- or stone-lined fireplace or oven often used for cooking and/or heating. For centuries, the hearth was considered an integral part of a home, often its central or most important feature...
s, road
Road
A road is a thoroughfare, route, or way on land between two places, which typically has been paved or otherwise improved to allow travel by some conveyance, including a horse, cart, or motor vehicle. Roads consist of one, or sometimes two, roadways each with one or more lanes and also any...
s, or deposits and remains, and from biofact
Biofact (archaeology)
In archaeology, a biofact is an object, found at an archaeological site and carrying archaeological significance, but previously unhanded by humans. A common type of biofact is a plant seed...
s or ecofacts, which are objects of archaeological interest made by other organisms, such as seed
Seed
A seed is a small embryonic plant enclosed in a covering called the seed coat, usually with some stored food. It is the product of the ripened ovule of gymnosperm and angiosperm plants which occurs after fertilization and some growth within the mother plant...
s or animal
Animal
Animals are a major group of multicellular, eukaryotic organisms of the kingdom Animalia or Metazoa. Their body plan eventually becomes fixed as they develop, although some undergo a process of metamorphosis later on in their life. Most animals are motile, meaning they can move spontaneously and...
bone
Bone
Bones are rigid organs that constitute part of the endoskeleton of vertebrates. They support, and protect the various organs of the body, produce red and white blood cells and store minerals. Bone tissue is a type of dense connective tissue...
.

Natural objects which have been moved but not changed by humans are called manuport
Manuport
In archaeology and anthropology, a manuport is a natural object which has been moved from its original context by human agency but otherwise remains unmodified. The word derives from the Latin words manus, meaning 'hand' and portare, meaning 'to carry'.Examples include stones or shells moved from...
s. Examples would include seashells moved inland or rounded pebbles placed away from the water action that would have fashioned them.

These distinctions are often blurred: for instance, a bone removed from an animal carcass is a biofact, but a bone carved into a useful implement is an artifact. Similarly there can be debate over early stone objects which may be crude artifacts or which may be naturally occurring phenomena that only appear to have been used by humans.

A human made object, such as a tool, weapon, or piece of jewelry. These items might hint at how people dressed, what work they did, or how they worshiped.