Encyclopedia
The National Museum of Capodimonte is located in the Palace of Capodimonte
Palace of Capodimonte
The Palace of Capodimonte is a grand Bourbon palazzo in Naples, Italy, formerly the summer residence and hunting lodge of the kings of the Two Sicilies. It today houses the National Museum of Capodimonte and art gallery of the city...
, a grand Bourbon
House of Bourbon
The House of Bourbon is a European royal house, a branch of the Capetian dynasty . Bourbon kings first ruled Navarre and France in the 16th century. By the 18th century, members of the Bourbon dynasty also held thrones in Spain, Naples, Sicily, and Parma...
palazzo
Palazzo
Palazzo, an Italian word meaning a large building , may refer to:-Buildings:*Palazzo, an Italian type of building**Palazzo style architecture, imitative of Italian palazzi...
in Naples
Naples
Naples is a city in Southern Italy, situated on the country's west coast by the Gulf of Naples. Lying between two notable volcanic regions, Mount Vesuvius and the Phlegraean Fields, it is the capital of the region of Campania and of the province of Naples...
, Italy
Italy
Italy , officially the Italian Republic languages]] under the European Charter for Regional or Minority Languages. In each of these, Italy's official name is as follows:;;;;;;;;), is a unitary parliamentary republic in South-Central Europe. To the north it borders France, Switzerland, Austria and...
. The museum
Museum
A museum is an institution that cares for a collection of artifacts and other objects of scientific, artistic, cultural, or historical importance and makes them available for public viewing through exhibits that may be permanent or temporary. Most large museums are located in major cities...
is the prime repository of Neapolitan painting and decorative art
Decorative art
The decorative arts is traditionally a term for the design and manufacture of functional objects. It includes interior design, but not usually architecture. The decorative arts are often categorized in opposition to the "fine arts", namely, painting, drawing, photography, and large-scale...
, with several important works from other Italian schools of painting, and some important Ancient Roman sculptures.

The vast collection can trace its origins back to 1738, when King Charles VII of Naples and Sicily
Kingdom of the Two Sicilies
The Kingdom of the Two Sicilies, commonly known as the Two Sicilies even before formally coming into being, was the largest and wealthiest of the Italian states before Italian unification...
(later Charles III
Charles III of Spain
Charles III was the King of Spain and the Spanish Indies from 1759 to 1788. He was the eldest son of Philip V of Spain and his second wife, the Princess Elisabeth Farnese...
, king of Spain
Spain
Spain , officially the Kingdom of Spain languages]] under the European Charter for Regional or Minority Languages. In each of these, Spain's official name is as follows:;;;;;;), is a country and member state of the European Union located in southwestern Europe on the Iberian Peninsula...
) decided to build a hunting lodge on the Capodimonte hill, but then decided that he would instead build a grand palace, partly because his existing residence, the Palace of Portici
Palace of Portici
The Royal Palace of Portici is a former royal palace in Portici, southern Italy. Today it is the home of the Orto Botanico di Portici. The Botanic Gardens are operated by the University of Naples Federico II...
, was too small to accommodate his court, and partly because he needed somewhere to house the fabulous Farnese art collection which he had inherited from his mother, Elisabetta Farnese, last descendant of the sovereign ducal family of Parma
Parma
Parma is a city in the Italian region of Emilia-Romagna famous for its ham, its cheese, its architecture and the fine countryside around it. This is the home of the University of Parma, one of the oldest universities in the world....
.

When the Parthenopaean Republic
Parthenopaean Republic
The Parthenopean Republic was a French-supported republic in the territory of the Kingdom of Naples, formed during the French Revolutionary Wars after King Ferdinand IV fled before advancing French troops...
was declared in 1799, Ferdinand fled to Palermo on board Nelson
Horatio Nelson, 1st Viscount Nelson
Horatio Nelson, 1st Viscount Nelson, 1st Duke of Bronté, KB was a flag officer famous for his service in the Royal Navy, particularly during the Napoleonic Wars. He was noted for his inspirational leadership and superb grasp of strategy and unconventional tactics, which resulted in a number of...
's Vanguard, taking the most valuable items from the museum with him. What remained was looted by the French troops of General Championnet
Jean Étienne Championnet
Jean Étienne Vachier, called Championnet , French general, enlisted in the army at an early age and served in the Great Siege of Gibraltar....
who were billeted there. During the ten years of French occupation (1806 to 1815), the art collection was transferred to the Naples National Archaeological Museum
Naples National Archaeological Museum
The Naples National Archaeological Museum is a museum in Naples, southern Italy, at the northwest corner of the original Greek wall of the city of Neapolis. The museum contains a large collection of Roman artifacts from Pompeii, Stabiae and Herculaneum...
. When King Ferdinand returned from Sicily in 1815, he employed many painters and sculptors to work on the redecoration of the palace . It was finally completed in 1840, and a gallery housing contemporary art was added.

After the palace passed in 1861 to the House of Savoy
House of Savoy
The House of Savoy was formed in the early 11th century in the historical Savoy region. Through gradual expansion, it grew from ruling a small county in that region to eventually rule the Kingdom of Italy from 1861 until the end of World War II, king of Croatia and King of Armenia...
, further pieces were added to the art collections, appointing Domenico Morelli
Domenico Morelli
Domenico Morelli was an Italian painter, one of the most important Neapolitan artists of the 19th century. He enrolled at the Royal Academy of Fine Arts in Naples in 1836. His early works are Romantic and contain imagery drawn from the Middle Ages and Byron...
as consultant for new acquisitions. They also added an extensive collection of historic firearms and other weapons. In 1866, the boudoir of Maria Amalia of Saxony
Maria Amalia of Saxony
Maria Amalia of Saxony was a German princess from the House of Wettin and was the wife of Charles III of Spain; she was the Queen consort of Naples and Sicily from 1738 till 1759 and then Queen consort of Spain from 1759 until her death in 1760...
was transferred to Capodimonte from the Palace of Portici
Palace of Portici
The Royal Palace of Portici is a former royal palace in Portici, southern Italy. Today it is the home of the Orto Botanico di Portici. The Botanic Gardens are operated by the University of Naples Federico II...
, and in 1877 a Roman era marble floor was brought in from a Roman villa on Capri.

After the end of the monarchy, the palace became purely a national museum in 1950, with many of the exhibits being returned from the National Museum. 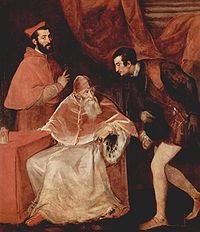 The first and second floors house the Galleria Nazionale (National Gallery), with paintings from the 13th to the 18th centuries including major works by Simone Martini
Simone Martini
Simone Martini was an Italian painter born in Siena.He was a major figure in the development of early Italian painting and greatly influenced the development of the International Gothic style....
, Raphael
Raphael
Raffaello Sanzio da Urbino , better known simply as Raphael, was an Italian painter and architect of the High Renaissance. His work is admired for its clarity of form and ease of composition and for its visual achievement of the Neoplatonic ideal of human grandeur...
, Titian
Titian
Tiziano Vecelli or Tiziano Vecellio Tiziano Vecelli or Tiziano Vecellio Tiziano Vecelli or Tiziano Vecellio (c. 1488/1490 – 27 August 1576 better known as Titian was an Italian painter, the most important member of the 16th-century Venetian school. He was born in Pieve di Cadore, near...
, Caravaggio
Caravaggio
Michelangelo Merisi da Caravaggio was an Italian artist active in Rome, Naples, Malta, and Sicily between 1593 and 1610. His paintings, which combine a realistic observation of the human state, both physical and emotional, with a dramatic use of lighting, had a formative influence on the Baroque...
, Masaccio
Masaccio
Masaccio , born Tommaso di Ser Giovanni di Simone, was the first great painter of the Quattrocento period of the Italian Renaissance. According to Vasari, Masaccio was the best painter of his generation because of his skill at recreating lifelike figures and movements as well as a convincing sense...
, Lorenzo Lotto
Lorenzo Lotto
Lorenzo Lotto was a Northern Italian painter draughtsman and illustrator, traditionally placed in the Venetian school. He painted mainly altarpieces, religious subjects and portraits...
, Giovanni Bellini
Giovanni Bellini
Giovanni Bellini was an Italian Renaissance painter, probably the best known of the Bellini family of Venetian painters. His father was Jacopo Bellini, his brother was Gentile Bellini, and his brother-in-law was Andrea Mantegna. He is considered to have revolutionized Venetian painting, moving it...
, Giorgio Vasari
Giorgio Vasari
Giorgio Vasari was an Italian painter, writer, historian, and architect, who is famous today for his biographies of Italian artists, considered the ideological foundation of art-historical writing.-Biography:...
, El Greco
El Greco
El Greco was a painter, sculptor and architect of the Spanish Renaissance. "El Greco" was a nickname, a reference to his ethnic Greek origin, and the artist normally signed his paintings with his full birth name in Greek letters, Δομήνικος Θεοτοκόπουλος .El Greco was born on Crete, which was at...
, Jacob Philipp Hackert
Jacob Philipp Hackert
Jacob Philipp Hackert was a landscape painter from Brandenburg, who did most of his work in Italy....
and many others. The museum is by far the best place to see paintings of the Neapolitan School, often under-appreciated by the wider world, with large holdings of Jusepe de Ribera, Luca Giordano
Luca Giordano
Luca Giordano was an Italian late Baroque painter and printmaker in etching. Fluent and decorative, he worked successfully in Naples and Rome, Florence and Venice, before spending a decade in Spain....
, the Neapolitan Caravaggisti
Caravaggisti
The Caravaggisti were stylistic followers of the 16th century Italian Baroque painter Michelangelo Merisi da Caravaggio. His influence on the new Baroque style that eventually emerged from Mannerism was profound. Caravaggio never established a workshop as most other painters did, and thus had no...
and many others (see List of works in the Galleria Nazionale di Capodimonte). Much of the ground floor is taken up by part of the magnificent Farnese collection of classical, mostly Roman, monumental sculpture, which survives here and in the Naples National Archaeological Museum
Naples National Archaeological Museum
The Naples National Archaeological Museum is a museum in Naples, southern Italy, at the northwest corner of the original Greek wall of the city of Neapolis. The museum contains a large collection of Roman artifacts from Pompeii, Stabiae and Herculaneum...
largely intact.

Elsewhere in the palace the royal apartments are furnished with antique 18th-century furniture and a collection of porcelain
Porcelain
Porcelain is a ceramic material made by heating raw materials, generally including clay in the form of kaolin, in a kiln to temperatures between and...
and majolica
Maiolica
Maiolica is Italian tin-glazed pottery dating from the Renaissance. It is decorated in bright colours on a white background, frequently depicting historical and legendary scenes.-Name:...
from the various royal residences