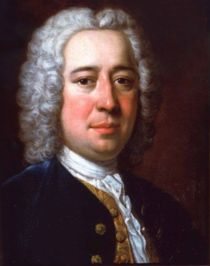 Nicola Porpora (or Niccolò Porpora) (17 August 1686 3 March 1768) was an Italian
Italy
Italy , officially the Italian Republic languages]] under the European Charter for Regional or Minority Languages. In each of these, Italy's official name is as follows:;;;;;;;;), is a unitary parliamentary republic in South-Central Europe. To the north it borders France, Switzerland, Austria and...
composer of Baroque
Baroque
The Baroque is a period and the style that used exaggerated motion and clear, easily interpreted detail to produce drama, tension, exuberance, and grandeur in sculpture, painting, literature, dance, and music...
operas (see opera seria
Opera seria
Opera seria is an Italian musical term which refers to the noble and "serious" style of Italian opera that predominated in Europe from the 1710s to c. 1770...
) and teacher of singing, whose most famous singing student was the castrato
Castrato
A castrato is a man with a singing voice equivalent to that of a soprano, mezzo-soprano, or contralto voice produced either by castration of the singer before puberty or one who, because of an endocrinological condition, never reaches sexual maturity.Castration before puberty prevents a boy's...
Farinelli
Farinelli
Farinelli , was the stage name of Carlo Maria Broschi, celebrated Italian castrato singer of the 18th century and one of the greatest singers in the history of opera.- Early years :...
. One of his other students was composer Matteo Capranica
Matteo Capranica
Matteo Capranica was an Italian composer. Born in Amatrice, Capranica studied at the Conservatorio di Sant'Onofrio a Porta Capuana in Naples under Nicola Porpora, Ignazio Prota, and Francesco Feo. After completing his studies he worked as maestro di cappella at various churches in Naples and...
.

Porpora was born in Naples
Naples
Naples is a city in Southern Italy, situated on the country's west coast by the Gulf of Naples. Lying between two notable volcanic regions, Mount Vesuvius and the Phlegraean Fields, it is the capital of the region of Campania and of the province of Naples...
. He graduated from the music conservatory Poveri di Gesù Cristo
Music Conservatories of Naples
The Music Conservatory of Naples is a music institution in Naples, southern Italy. It is currently located in the complex of San Pietro a Majella.-San Pietro a Majella:...
of his native city, where the civic opera scene was dominated by Alessandro Scarlatti
Alessandro Scarlatti
Alessandro Scarlatti was an Italian Baroque composer especially famous for his operas and chamber cantatas. He is considered the founder of the Neapolitan school of opera. He was the father of two other composers, Domenico Scarlatti and Pietro Filippo Scarlatti.-Life:Scarlatti was born in...
.

After a rebuff from the court of Charles VI
Charles VI, Holy Roman Emperor
Charles VI was the penultimate Habsburg sovereign of the Habsburg Empire. He succeeded his elder brother, Joseph I, as Holy Roman Emperor, King of Bohemia , Hungary and Croatia , Archduke of Austria, etc., in 1711...
at Vienna
Vienna
Vienna is the capital and largest city of the Republic of Austria and one of the nine states of Austria. Vienna is Austria's primary city, with a population of about 1.723 million , and is by far the largest city in Austria, as well as its cultural, economic, and political centre...
in 1725, Porpora settled mostly in Venice
Venice
Venice is a city in northern Italy which is renowned for the beauty of its setting, its architecture and its artworks. It is the capital of the Veneto region...
, composing and teaching regularly in the schools of La Pietà and the Incurabili. In 1729 the anti-Handel clique invited him to London
London
London is the capital city of :England and the :United Kingdom, the largest metropolitan area in the United Kingdom, and the largest urban zone in the European Union by most measures. Located on the River Thames, London has been a major settlement for two millennia, its history going back to its...
to set up an opera company as a rival to Handel's, without success, and in the 1733-1734 season, even the presence of his pupil, the great Farinelli, failed to save the dramatic company in Lincoln's Inn Fields
Lincoln's Inn Fields
Lincoln's Inn Fields is the largest public square in London, UK. It was laid out in the 1630s under the initiative of the speculative builder and contractor William Newton, "the first in a long series of entrepreneurs who took a hand in developing London", as Sir Nikolaus Pevsner observes...
(the "Opera of the Nobility
Opera of the Nobility
The Opera of the Nobility was an opera company set up and funded in 1733 by a group of nobles opposed to George II of England, in order to rival the Second Royal Academy of Music company under Handel .Nicola Porpora was invited to be its musical director and Owen Swiny considered as its talent scout...
") from bankruptcy.

An interval as Kapellmeister
Kapellmeister
Kapellmeister is a German word designating a person in charge of music-making. The word is a compound, consisting of the roots Kapelle and Meister . The words Kapelle and Meister derive from the Latin: capella and magister...
at the Dresden
Dresden
Dresden is the capital city of the Free State of Saxony in Germany. It is situated in a valley on the River Elbe, near the Czech border. The Dresden conurbation is part of the Saxon Triangle metropolitan area....
court of the Elector of Saxony from 1748 ended in strained relations with his rival in Venice and Rome, the hugely successful opera composer Johann Adolph Hasse
Johann Adolph Hasse
Johann Adolph Hasse was an 18th-century German composer, singer and teacher of music. Immensely popular in his time, Hasse was best known for his prolific operatic output, though he also composed a considerable quantity of sacred music...
and his wife, the prima donna Faustina
Faustina Bordoni
Faustina Bordoni was an Italian mezzo-soprano.-Early career:She was born in Venice and brought up under the protection of the aristocratic brother composers Alessandro and Benedetto Marcello. Her singing teacher was another composer, Michelangelo Gasparini...
, and resulted in Porpora's departure in 1752. From Dresden he went to Vienna, where he gave music lessons to the young Joseph Haydn
Joseph Haydn
Franz Joseph Haydn , known as Joseph Haydn , was an Austrian composer, one of the most prolific and prominent composers of the Classical period. He is often called the "Father of the Symphony" and "Father of the String Quartet" because of his important contributions to these forms...
, who lived with Porpora as accompanist and in the character of a valet, but allowed later that he had learned from the maestro "the true fundamentals of composition". Then Porpora returned in 1759 to Naples.

From this time Porpora's career was a series of misfortunes: his florid style was becoming old-fashioned, his last opera, Camilla, failed, his pension from Dresden stopped, and he became so poor that the expenses of his funeral were paid by a subscription concert. Yet at the moment of his death Farinelli and Caffarelli were living in splendid retirement on fortunes largely based on the excellence of the old maestro's teaching.

A good linguist, who was admired for the idiomatic fluency of his recitatives, and a man of considerable literary culture, Porpora was also celebrated for his conversational wit. He was well-read in Latin and Italian
Italian language
Italian is a Romance language spoken mainly in Europe: Italy, Switzerland, San Marino, Vatican City, by minorities in Malta, Monaco, Croatia, Slovenia, France, Libya, Eritrea, and Somalia, and by immigrant communities in the Americas and Australia...
literature, wrote poetry
Poetry
Poetry is a form of literary art in which language is used for its aesthetic and evocative qualities in addition to, or in lieu of, its apparent meaning...
and spoke French
French language
French is a Romance language spoken as a first language in France, the Romandy region in Switzerland, Wallonia and Brussels in Belgium, Monaco, the regions of Quebec and Acadia in Canada, and by various communities elsewhere. Second-language speakers of French are distributed throughout many parts...
, German
German language
German is a West Germanic language, related to and classified alongside English and Dutch. With an estimated 90 – 98 million native speakers, German is one of the world's major languages and is the most widely-spoken first language in the European Union....
and English
English language
English is a West Germanic language that arose in the Anglo-Saxon kingdoms of England and spread into what was to become south-east Scotland under the influence of the Anglian medieval kingdom of Northumbria...
.

Besides some four dozen operas, there are oratorios, solo cantatas with keyboard accompaniment, motets and vocal serenades. Among his larger works, his 1720 opera Orlando, one mass
Mass (music)
The Mass, a form of sacred musical composition, is a choral composition that sets the invariable portions of the Eucharistic liturgy to music...
, his Venetian Vespers, and the opera Arianna in Nasso (1733 according to HOASM) have been recorded .