Who did he marry?
More 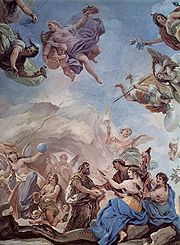 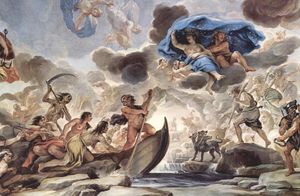 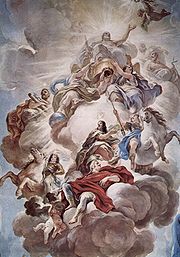 Luca Giordano was an Italian
Italy
Italy , officially the Italian Republic languages]] under the European Charter for Regional or Minority Languages. In each of these, Italy's official name is as follows:;;;;;;;;), is a unitary parliamentary republic in South-Central Europe. To the north it borders France, Switzerland, Austria and...
late Baroque
Baroque
The Baroque is a period and the style that used exaggerated motion and clear, easily interpreted detail to produce drama, tension, exuberance, and grandeur in sculpture, painting, literature, dance, and music...
painter and printmaker in etching
Etching
Etching is the process of using strong acid or mordant to cut into the unprotected parts of a metal surface to create a design in intaglio in the metal...
. Fluent and decorative, he worked successfully in Naples and Rome, Florence and Venice, before spending a decade in Spain.

Giordano acquired a style fusing Venetian and Roman styles. He combines the ornamental pomp of Paul Veronese with the lively complex schemes, the "grand manner" of Pietro da Cortona
Pietro da Cortona
Pietro da Cortona, by the name of Pietro Berrettini, born Pietro Berrettini da Cortona, was the leading Italian Baroque painter of his time and also one of the key architects in the emergence of Roman Baroque architecture. He was also an important decorator...
. He was noted also for lively and showy colour, and between 1682-83 he painted various fresco series in Florence
Florence
Florence is the capital city of the Italian region of Tuscany and of the province of Florence. It is the most populous city in Tuscany, with approximately 370,000 inhabitants, expanding to over 1.5 million in the metropolitan area....
, including in the dome of Corsini Chapel of the Chiesa del Carmine. In the large block occupied by the former Medici palace, he painted the ceiling of the Biblioteca Riccardiana
Accademia della Crusca
The Accademia della Crusca is an Italian society for scholars and Italian linguists and philologists established in Florence. After the Accademia Cosentina, it is the oldest Italian academy still in existence...
(Allegory of Divine Wisdom) and the long gallery of the Palazzo Medici-Riccardi. The vast frescoes of the latter are contained in the 1670s gallery addition, overlooking the gardens. The planning was overseen by Alessandro Segni and commissioned by Francesco Riccardi. They include the prototypic hagiographic celebration of the Medici family in the center, surrounded by a series of interlocking narratives: allegorical figures (the Cardinal Virtues, the Elements of Nature) and mythological episodes (Neptune and Amphitrita, the Rape of Proserpine, the Triumphal procession of Bacchus, the Death of Adonis, Ceres and Triptolemus) http://www.palazzo-medici.it/eng/sez_storia/riccardi.htm.

Charles II of Spain
Charles II of Spain
Charles II was the last Habsburg King of Spain and the ruler of large parts of Italy, the Spanish territories in the Southern Low Countries, and Spain's overseas Empire, stretching from the Americas to the Spanish East Indies...
towards 1687 invited him over to Madrid
Madrid
Madrid is the capital and largest city of Spain. The population of the city is roughly 3.3 million and the entire population of the Madrid metropolitan area is calculated to be 6.271 million. It is the third largest city in the European Union, after London and Berlin, and its metropolitan...
, where he remained for 10 years (1692-1702). In Spain, he produced works for the Royal Alcazar of Madrid
Royal Alcazar of Madrid
The Royal Alcázar of Madrid was a Muslim fortress built in the second half of the 9th century, at the site of today's Royal Palace of Madrid, Madrid, Spain. The structure was extended and enlarged over the centuries, particularly after the 16th century...
, Buen Retiro Palace
Buen Retiro Palace
Buen Retiro Palace in Madrid was a large palace complex designed by the architect Alonso Carbonell and built on the orders of Philip IV of Spain as a secondary residence and place of recreation . It was built in what was then the eastern limits of the city of Madrid...
, El Escorial monastery
El Escorial
The Royal Seat of San Lorenzo de El Escorial is a historical residence of the king of Spain, in the town of San Lorenzo de El Escorial, about 45 kilometres northwest of the capital, Madrid, in Spain. It is one of the Spanish royal sites and functions as a monastery, royal palace, museum, and...
, the cathedral of Toledo
Toledo, Spain
Toledo's Alcázar became renowned in the 19th and 20th centuries as a military academy. At the outbreak of the Spanish Civil War in 1936 its garrison was famously besieged by Republican forces.-Economy:...
, and other sites. Giordano was popular at the Spanish court, and the king granted him the title of a "caballero". One anecdote of Giordano's speed at painting is that, he was once asked by the Queen of Spain what his wife looked like. On the spot, he painted his wife into the picture before him for the Queen.

In Spain he executed numerous works, continuing in the Escorial the series started by Cambiasi
Luca Cambiasi
Luca Cambiasi was an Italian painter and draftsman, familiarly known as Lucchetto da Genova.-Biography:...
, and painting frescoes of the Triumphs of the Church, the Genealogy and Life of the Madonna, the stories of Moses
Moses
Moses was, according to the Hebrew Bible and Qur'an, a religious leader, lawgiver and prophet, to whom the authorship of the Torah is traditionally attributed...
, Gideon, David
David
David was the second king of the united Kingdom of Israel according to the Hebrew Bible and, according to the Gospels of Matthew and Luke, an ancestor of Jesus Christ through both Saint Joseph and Mary...
, Sisera
Sisera
Sisera was commander of the Canaanite army of King Jabin of Hazor mentioned in the of the Hebrew Bible. After being defeated by Barak, Sisera was killed by Jael, who hammered a tent peg into his temple....
and the Celebrated Women of Scripture, all works of large dimensions. His Dream of Solomon
Solomon
Solomon , according to the Book of Kings and the Book of Chronicles, a King of Israel and according to the Talmud one of the 48 prophets, is identified as the son of David, also called Jedidiah in 2 Samuel 12:25, and is described as the third king of the United Monarchy, and the final king before...
http://www.wga.hu/html/g/giordano/dream_s.html (1693, now at Prado
Museo del Prado
The Museo del Prado is the main Spanish national art museum, located in central Madrid. It features one of the world's finest collections of European art, from the 12th century to the early 19th century, based on the former Spanish Royal Collection, and unquestionably the best single collection of...
) dates from this period. His pupils, Aniello Rossi and Matteo Pacelli, assisted him in Spain. In Madrid he worked more in oil-colour, a Nativity
Nativity of Jesus in art
The Nativity of Jesus has been a major subject of Christian art since the 4th century. The artistic depictions of the Nativity or birth of Jesus, celebrated at Christmas, are based on the narratives in the Bible, in the Gospels of Matthew and Luke, and further elaborated by written, oral and...
there being one of his best productions.

Soon after the death of Charles in 1700, Giordano, now wealthy, returned to Naples. He spent large sums in acts of munificence, and was particularly liberal to his poorer brother artists. One of his maxims was that the good painter is the one whom the public like, and that the public are attracted more by colour than by design.

Giordano had an astonishing facility, which often lead to an impression of superficiality of his works. He left many works in Rome, and far more in Naples. Of the latter, his Christ expelling the Traders from the Temple in the church of the Padri Girolamini, a colossal work, full of expressive "lazzaroni"; also the frescoes of the Triumph of Judith at San Martino
Certosa di San Martino
The Certosa di San Martino is a former monastery complex, now a museum, in Naples, southern Italy. It is the most visible landmark of the city, perched atop the Vomero hill that commands the gulf. A Carthusian monastery, it was finished and inaugurated under the rule of Queen Joan I in 1368. It...
http://www.wga.hu/html/g/giordano/triumph.html, and those in the Tesoro della Certosa, including the subject of Moses and the Brazen Serpent; and the cupola
Cupola
In architecture, a cupola is a small, most-often dome-like, structure on top of a building. Often used to provide a lookout or to admit light and air, it usually crowns a larger roof or dome....
paintings in the Church of Santa Brigida, which contains the artist's own tomb. Other superior examples are the Judgment of Paris in the Berlin Museum, and Christ with the Doctors in the Temple, in the Corsini Gallery of Rome. In later years, he painted influential frescoes for the Cappella Corsini, the Palazzo Medici-Riccardi and other works.

As a young man he engraved works with considerable skill some of his own paintings, such as the Slaughter of the Priests of Baal. He also painted much on the crystal borderings of looking-glasses, cabinets and others seen in many Italian palaces, and was, in this form of art, the master of Pietro Garofalo.

Luca Giordano died in Naples in 1705.

Giordano has been criticized as being a prolific trader of all styles, and master of none. Michael Levey
Michael Levey
Sir Michael Vincent Levey, LVO was a British art historian and was director of the National Gallery for thirteen years, from 1973 to 1986.-Biography:...
remarks of him "Giordano was the ideal rococo
Rococo
Rococo , also referred to as "Late Baroque", is an 18th-century style which developed as Baroque artists gave up their symmetry and became increasingly ornate, florid, and playful...
painter, speedy, prolific, dazzling in colour, assured in draughtsmanship, ever-talented and never touching the fringe of genius."He has been viewed as a proto-Tiepolo
Giovanni Battista Tiepolo
Giovanni Battista Tiepolo , also known as Gianbattista or Giambattista Tiepolo, was an Italian painter and printmaker from the Republic of Venice...
, reanimating that grand manner of Cortona in a style that would brighten with Tiepolo.

Giordano has paintings in several British Collections including The National Gallery, The Herberrt Museum in Coventry, Derby Art Gallery
Derby Museum and Art Gallery
Derby Museum and Art Gallery was established in 1879, along with Derby Central Library, in a new building designed by Richard Knill Freeman and given to Derby by Michael Thomas Bass. The collection includes a whole gallery displaying the paintings of Joseph Wright of Derby; there is also a large...
and several in Glasgow.