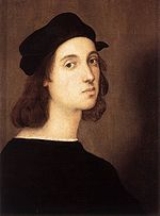 Overview
Raffaello Sanzio da Urbino (April 6 or March 28, 1483 – April 6, 1520), better known simply as Raphael, was an Italian
Italy
Italy , officially the Italian Republic languages]] under the European Charter for Regional or Minority Languages. In each of these, Italy's official name is as follows:;;;;;;;;), is a unitary parliamentary republic in South-Central Europe. To the north it borders France, Switzerland, Austria and...
painter
Painting
Painting is the practice of applying paint, pigment, color or other medium to a surface . The application of the medium is commonly applied to the base with a brush but other objects can be used. In art, the term painting describes both the act and the result of the action. However, painting is...
and architect
Architect
An architect is a person trained in the planning, design and oversight of the construction of buildings. To practice architecture means to offer or render services in connection with the design and construction of a building, or group of buildings and the space within the site surrounding the...
of the High Renaissance
High Renaissance
The expression High Renaissance, in art history, is a periodizing convention used to denote the apogee of the visual arts in the Italian Renaissance...
. His work is admired for its clarity of form and ease of composition and for its visual achievement of the Neoplatonic
Neoplatonism
Neoplatonism , is the modern term for a school of religious and mystical philosophy that took shape in the 3rd century AD, based on the teachings of Plato and earlier Platonists, with its earliest contributor believed to be Plotinus, and his teacher Ammonius Saccas...
ideal of human grandeur. Together with Michelangelo
Michelangelo
Michelangelo di Lodovico Buonarroti Simoni , commonly known as Michelangelo, was an Italian Renaissance painter, sculptor, architect, poet, and engineer who exerted an unparalleled influence on the development of Western art...
and Leonardo da Vinci
Leonardo da Vinci
Leonardo di ser Piero da Vinci was an Italian Renaissance polymath: painter, sculptor, architect, musician, scientist, mathematician, engineer, inventor, anatomist, geologist, cartographer, botanist and writer whose genius, perhaps more than that of any other figure, epitomized the Renaissance...
, he forms the traditional trinity of great masters of that period.

Raphael was enormously productive, running an unusually large workshop, and despite his death at 37, a large body of his work remains.

Why is The School of Athens a difficult painting to interpret?