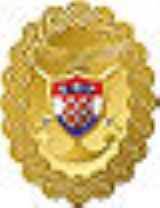 Encyclopedia
Croatian military is officially called Armed Forces
Armed forces
The armed forces of a country are its government-sponsored defense, fighting forces, and organizations. They exist to further the foreign and domestic policies of their governing body, and to defend that body and the nation it represents from external aggressors. In some countries paramilitary...
of the Republic of Croatia
Croatia
Croatia , officially the Republic of Croatia , is a unitary democratic parliamentary republic in Europe at the crossroads of the Mitteleuropa, the Balkans, and the Mediterranean. Its capital and largest city is Zagreb. The country is divided into 20 counties and the city of Zagreb. Croatia covers ...
( - OSRH) and it consists of three branches:

The total number of active military personal in Croatian Armed Forces stands at 18,400 and additionally there are 1,600 civilians working in various service branches of the armed forces.


Total available male manpower aged 16–49 number 1,035,712, of which 771,323 are technically fit for military service. Male citizens are now no longer subject to compulsory military service since January 1, 2008. However, the last generation of 2007 servicemen
Soldier
A soldier is a member of the land component of national armed forces; whereas a soldier hired for service in a foreign army would be termed a mercenary...
was also absolved of compulsory service by an act from then Minister of Defense Berislav Rončević
Berislav Roncevic
Berislav Rončević is a Croatian politician, and the former Minister of Internal Affairs in the Government of Croatia and the Minister of Defense....
.

The Croatian military budget
Military budget
A military budget of an entity, most often a nation or a state, is the budget and financial resources dedicated to raising and maintaining armed forces for that entity. Military budgets reflect how much an entity perceives the likelihood of threats against it, or the amount of aggression it wishes...
for the past 6–7 years was kept below 2% of GDP, a vast difference from the 1990s when defense expenditure represented a major stake in Croatian Budgetary expenditure due to the Croatian War of Independence
Croatian War of Independence
The Croatian War of Independence was fought from 1991 to 1995 between forces loyal to the government of Croatia—which had declared independence from the Socialist Federal Republic of Yugoslavia —and the Serb-controlled Yugoslav People's Army and local Serb forces, with the JNA ending its combat...
. For example, 1995 Croatian defense budget stood at 12.4 billion Croatian Kuna
Croatian kuna
The kuna is the currency of Croatia since 1994 . It is subdivided into 100 lipa. The kuna is issued by the Croatian National Bank and the coins are minted by the Croatian Monetary Institute....
or just over 12% of GDP, which was also the highest defense expenditure ever.

According to government's economic plans for the 2010-2012 period, Croatian military expenditures are to remain somewhere around 1.35-1.40%. This would have meant that Croatia
Croatia
Croatia , officially the Republic of Croatia , is a unitary democratic parliamentary republic in Europe at the crossroads of the Mitteleuropa, the Balkans, and the Mediterranean. Its capital and largest city is Zagreb. The country is divided into 20 counties and the city of Zagreb. Croatia covers ...
would have spent the least amount of money on its armed forces in its own history. Because of this sharp fall, there was concern about postponements or even cancellation of many modernization projects.

Again, however, contrary to expectations, the military expenditure for 2011 was instead raised up to 4.96 billions kuna, +4.6% more than the previous year, slightly more of 1.5% of GDP.

It have also to be noted that the parallel completion of the planned process of military personnel downsizing, would hopefully allow a sensibly more efficient allocation of monetary resources. 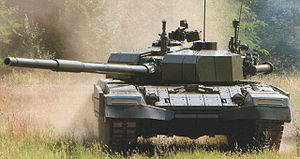 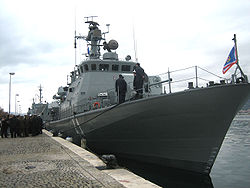 The Croatian government has implemented series of defence reforms with several important goals. These goals are meant to reduce the number of personnel serving in the military. By 2010, the Croatian military will have 20,400 military personnel including 1600 civilian personnel.

The Armed Forces consist of peacetime and wartime component. The peacetime component is composed of active military officers, civil servants and employees in the Croatian Armed Forces, cadets, and conscripts
Conscription
Conscription is the compulsory enlistment of people in some sort of national service, most often military service. Conscription dates back to antiquity and continues in some countries to the present day under various names...
serving a 6-month national service and reservists when on military exercise. The wartime component of the Armed Forces is additionally composed of all other reservists.

The General Staff
Croatian General Staff
General Staff of the Armed Forces of the Republic of Croatia is a joint body organised within the Ministry of Defence.It is responsible for development, organisation, and equipping, training and functioning of the first strategic echelon and the other strategic echelon .-Chief of General...
is part of the Ministry of Defense in charge of commanding, training and use of the Armed Forces. It also has a number of units under its direct command, including the Special Operations Battalion
Special Operations Battalion (Croatia)
The Special Operations Battalion , or popularly BSD was founded on 8 September 2000 with merging of the Special Combat Skills Center from Šepurine and personnel from the 1st Croatian Guard Corps...
, Honor Guard Battalion and several others.

Special Operations Battalion ( or BSD) was founded on September 8, 2000 with merging of the Special Combat Skills Center and some personnel from the 1st Croatian Guards Corps (1. Hrvatski Gardijski Zdrug). The Battalion has 300 men. Today, it is one of the most elite units of the Croatian military, as well as being one of the best trained and equipped special forces units in the region.

The Croatian General Staff
Croatian General Staff
General Staff of the Armed Forces of the Republic of Croatia is a joint body organised within the Ministry of Defence.It is responsible for development, organisation, and equipping, training and functioning of the first strategic echelon and the other strategic echelon .-Chief of General...
exercises direct command over the battalion which thus elevated the unit to strategic level for quicker reaction and overall better and faster tactical and strategic situations. Also, this means that members of all three branches of the Croatian armed forces can apply for selection.

Duties of Honour Guard are performed by Počasno zaštitna bojna (300 men), located at Zagreb
Zagreb
Zagreb is the capital and the largest city of the Republic of Croatia. It is in the northwest of the country, along the Sava river, at the southern slopes of the Medvednica mountain. Zagreb lies at an elevation of approximately above sea level. According to the last official census, Zagreb's city...
in Tuškanac military base.

Government plans to substantially modernize the Armed Forces at a cost of 4.0 billion USD (2007–2015). The modernization calls for a complete revamp of the armed forces so that it can face all the challenges of the 21st century.

Navy plans are still being worked on but present plans call for a medium expansion of the naval force.

On April 1, 2009 Croatia
Croatia
Croatia , officially the Republic of Croatia , is a unitary democratic parliamentary republic in Europe at the crossroads of the Mitteleuropa, the Balkans, and the Mediterranean. Its capital and largest city is Zagreb. The country is divided into 20 counties and the city of Zagreb. Croatia covers ...
joined NATO and is also an official candidate country to become the 28th member of the European Union
European Union
The European Union is an economic and political union of 27 independent member states which are located primarily in Europe. The EU traces its origins from the European Coal and Steel Community and the European Economic Community , formed by six countries in 1958...
. The Croatian Armed Forces participate in many (military
Military
A military is an organization authorized by its greater society to use lethal force, usually including use of weapons, in defending its country by combating actual or perceived threats. The military may have additional functions of use to its greater society, such as advancing a political agenda e.g...
) aspects of both organizations as well as actively participate in many UN peacekeeping operations worldwide.