Encyclopedia
The 2S1 Gvozdika,; is a Soviet 122-mm self-propelled howitzer
Self-propelled artillery
Self-propelled artillery vehicles are combat vehicles armed with artillery. Within the term are covered self-propelled guns and rocket artillery...
that resembles the PT-76
PT-76
The PT-76 is a Soviet amphibious light tank which was introduced in the early 1950s and soon became the standard reconnaissance tank of the Soviet Army and the other Warsaw Pact armed forces. It was widely exported to other friendly states, like India, Iraq, North Korea and North Vietnam. Overall,...
but is essentially a version of the MT-LB
MT-LB
The MT-LB is a Soviet multi-purpose fully amphibious auxiliary armoured vehicle which was first introduced in the late 1960s...
APC, mounting the 2A18 howitzer. "2S1" is its GRAU
Grau
Grau is a German word meaning "gray" and a Catalan word meaning "grade". It may refer to:* BAP Almirante Grau , a De Zeven Provinciën class cruiser in service with the Peruvian Navy* Grau Käse, Tyrolean grey cheese...
designation. An alternative Russian designation is SAU-122 but in the Russian Army it is commonly known as Gvozdika. The 2S1 is fully amphibious
Amphibious vehicle
An amphibious vehicle , is a vehicle or craft, that is a means of transport, viable on land as well as on water – just like an amphibian....
with very little preparation, and once afloat is propelled by its tracks. A variety of wider tracks are also available to allow the 2S1 to operate in snow or swamp conditions. It is NBC protected and has infra-red night-vision capability.

The 2S1 has seven road wheels on each side; the running gear can be fitted with different widths of track to match terrain. The interior is separated into a driver's compartment on the left, an engine compartment on the right and a fighting compartment to the rear. Within the fighting compartment sit the commander on the left, the loader on the right and the gunner to the front. The all-welded turret is located above the fighting compartment. The 2S1 utilizes a 122 mm howitzer based on the towed D-30 howitzer. The gun is equipped with a double-baffle muzzle brake
Muzzle brake
Muzzle brakes and recoil compensators are devices that are fitted to the muzzle of a firearm or cannon to redirect propellant gases with the effect of countering both recoil of the gun and unwanted rising of the barrel during rapid fire...
and a fume extractor. It is capable of firing HE (high explosive), leaflet, HE/RAP
Rocket Assisted Projectile
A Rocket Assisted Projectile is an artillery or cannon round incorporating a rocket motor for independent propulsion. This grants the projectile both greater speed and range than an ordinary shell, which is propelled only by the ballistic force of the gun's exploding charge...
, armor-piercing HE, flechette
Flechette
A flechette is a pointed steel projectile, with a vaned tail for stable flight. The name comes from French , "little arrow" or "dart", and sometimes retains the acute accent in English: fléchette.-Bulk and artillery use:...
and chemical rounds.

The 2S1 Gvozdika (as well as other related vehicles such as the MT-LB
MT-LB
The MT-LB is a Soviet multi-purpose fully amphibious auxiliary armoured vehicle which was first introduced in the late 1960s...
and Opal
Opal (armoured personnel carrier)
The Opal-I is a multi-purpose fully amphibious armoured personnel carrier developed and produced by HSW S.A.. APC is a development of MT-LB that was produced in HSW on licence. Major changes are with reworked nose section and propellers for better in water speed and manoeuvrability, new turret with...
) were produced in Poland by Huta Stalowa Wola
Huta Stalowa Wola
Huta Stalowa Wola is a steel mill and manufacturing company in Stalowa Wola, Poland.It was established in 1938-1939 in Second Polish Republic. It was a major part of a series of investments made by the Polish government in the years 1936–1939 to create the Central Industrial Region...
under the name 2S1 Goździk. 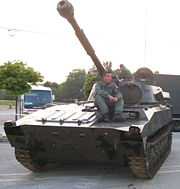