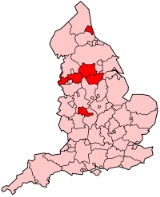 The metropolitan county councils were abolished in 1986 with most of their functions being devolved to the individual boroughs, making them de facto unitary authorities
Unitary authority
A unitary authority is a type of local authority that has a single tier and is responsible for all local government functions within its area or performs additional functions which elsewhere in the relevant country are usually performed by national government or a higher level of sub-national...
. The remaining functions were taken over by joint boards.

The metropolitan counties have population densities of between 800 (<a class='greylink1' onMouseover='ShowPop("27499",this,"south_yorkshire.gif", event)'