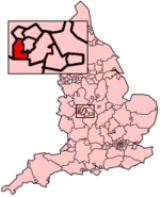 The council has 72 councillors representing 24 wards. As of 5 May 2011, following the 2008 local elections
Dudley Council election, 2008
Elections to Dudley Council were held on 1 May 2008. One third of the council was up for election, with an additional seat in Sedgley ward following the resignation of a councillor....
and by-election
By-election
A by-election is an election held to fill a political office that has become vacant between regularly scheduled elections....
s there are 43 Conservative
Conservative Party (UK)
The Conservative Party, formally the Conservative and Unionist Party, is a centre-right political party in the United Kingdom that adheres to the philosophies of conservatism and British unionism. It is the largest political party in the UK, and is currently the largest single party in the House...
councillors, 28 Labour
Labour Party (UK)
The Labour Party is a centre-left democratic socialist party in the United Kingdom. It surpassed the Liberal Party in general elections during the early 1920s, forming minority governments under Ramsay MacDonald in 1924 and 1929-1931. The party was in a wartime coalition from 1940 to 1945, after...
councillors and one UK Independence Party
United Kingdom Independence Party
The United Kingdom Independence Party is a eurosceptic and right-wing populist political party in the United Kingdom. Whilst its primary goal is the UK's withdrawal from the European Union, the party has expanded beyond its single-issue image to develop a more comprehensive party platform.UKIP...
councillor.

The borough includes a number of historic sites such as Dudley Castle
Dudley Castle
Dudley Castle is a ruined castle in the town of Dudley, West Midlands, England. Dudley Zoo is located in its grounds. The location, Castle Hill, is an outcrop of Wenlock Group limestone that was extensively quarried during the Industrial Revolution, and which now along with Wren's Nest Hill is a...
, The Leasowes
The Leasowes
The Leasowes is a 57 hectare estate in Halesowen, historically in the county of Shropshire, England, comprising house and gardens....
and Himley Hall
Himley Hall
Himley Hall is a country house situated in Staffordshire, England. It is situated in the south of the county near the villages of Wombourne and Kingswinford, and the town of Sedgley...
as well as tourist attractions such as Dudley Zoo
Dudley Zoo
Dudley Zoological Gardens is a zoo located within the grounds of Dudley Castle in the town of Dudley, in the Black Country region of the West Midlands, England...
, the Black Country Living Museum
Black Country Living Museum
The Black Country Living Museum is an open-air museum of rebuilt historic buildings, located in Dudley in the West Midlands of England. The museum occupies a urban heritage park in the shadow of Dudley Castle in the centre of the Black Country conurbation...
, Dudley Canal Tunnel
Dudley Tunnel
Dudley Tunnel is a canal tunnel on the Dudley Canal Line No 1, England. At about long, it is now the second longest canal tunnel on the UK canal network today....
and limestone mines
Wren's Nest
The Wren's Nest is a National Nature Reserve located to the north west of the town centre of Dudley, West Midlands, England. Today, apart from the geological interest, the site is home to a number of species of birds and locally rare flora; the caverns also support large roosting populations of bats...
, and the Red House Glass Cone
Red House Cone
The Red House Cone is located in Wordsley in the West Midlands, adjacent to the Stourbridge Canal bridge on the A491 High Street. It is a high conical brick structure with a diameter of , used for the production of glass. It was used by the Stuart Crystal firm till 1936, when the company moved to...
.

Unemployment in the borough stood at 5.1% as of May 2010, below the national average, though before the recession which began in 2008
Late 2000s recession
The late-2000s recession, sometimes referred to as the Great Recession or Lesser Depression or Long Recession, is a severe ongoing global economic problem that began in December 2007 and took a particularly sharp downward turn in September 2008. The Great Recession has affected the entire world...
it was considerably lower.
The source of this article is wikipedia, the free encyclopedia.  The text of this article is licensed under the GFDL.