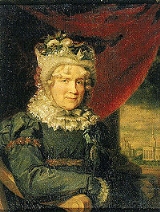 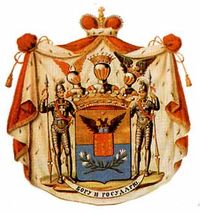 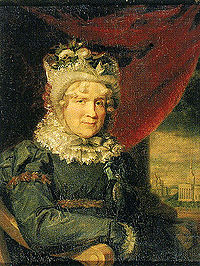 The Lievens are one of the oldest and noblest families of Baltic German
Baltic German
The Baltic Germans were mostly ethnically German inhabitants of the eastern shore of the Baltic Sea, which today form the countries of Estonia and Latvia. The Baltic German population never made up more than 10% of the total. They formed the social, commercial, political and cultural élite in...
s. They claim descent from Caupo of Turaida
Caupo of Turaida
Caupo of Turaida, or Kaupo was a leader of the Finnic-speaking Livonian people in the beginning of the 13th century, in what is now Latvia. He is sometimes called 'King of Livonia', Chronicle of Henry of Livonia calls him quasi rex, 'like a king'.He was the first prominent Livonian to be christened...
(Latvian, Kaupo), the Livonian quasi rex who converted to Christianity in 1186, when Bishop Meinhard attempted to Christianize the region. Henrici Chronicon Lyvoniae tells that Caupo in winter 1203-1204 went to Rome with Theodoric, a Cistercian Monk (who was to become the founder of the Swordbrothers , then the first bishop of Estonia). They were received by the Pope Innocent III
Pope Innocent III
Pope Innocent III was Pope from 8 January 1198 until his death. His birth name was Lotario dei Conti di Segni, sometimes anglicised to Lothar of Segni....
who backed up their plans to Christianize Livonia. According to feudal records, the Lieven ancestor Gerardus Līvo (1269) and his son Johannes (1296) entered service as vassals to the archbishop of Rīga. One of Caupo's daughters married an ancestor of the barons, then earls Ungern-Sternberg.

Caupo's grandson, Nicholas, was the first to spell his name Lieven.

Reinhold Liewen, the Swedish governor of Oesel (Saaremaa
Saaremaa
Saaremaa is the largest island in Estonia, measuring 2,673 km². The main island of Saare County, it is located in the Baltic Sea, south of Hiiumaa island, and belongs to the West Estonian Archipelago...
), in 1653 was made a baron
Baron
Baron is a title of nobility. The word baron comes from Old French baron, itself from Old High German and Latin baro meaning " man, warrior"; it merged with cognate Old English beorn meaning "nobleman"...
together with his brother, whose son - Baron Hans-Heinrich von Liewen - accompanied Charles XII
Charles XII of Sweden
Charles XII also Carl of Sweden, , Latinized to Carolus Rex, Turkish: Demirbaş Şarl, also known as Charles the Habitué was the King of the Swedish Empire from 1697 to 1718...
in all his campaigns and expeditions. Among Reinhold's descendants, one branch settled in Courland
Courland
Courland is one of the historical and cultural regions of Latvia. The regions of Semigallia and Selonia are sometimes considered as part of Courland.- Geography and climate :...
and was recognized in 1801 as in the Holy Roman Empire
Holy Roman Empire
The Holy Roman Empire was a realm that existed from 962 to 1806 in Central Europe.It was ruled by the Holy Roman Emperor. Its character changed during the Middle Ages and the Early Modern period, when the power of the emperor gradually weakened in favour of the princes...
. Johann-Christoph von Lieven was the first member of the family to gain distinction in the Russian service: he served as Governor of Arkhangelsk under Catherine the Great
Catherine II of Russia
Catherine II, also known as Catherine the Great , Empress of Russia, was born in Stettin, Pomerania, Prussia on as Sophie Friederike Auguste von Anhalt-Zerbst-Dornburg...
and as General of Infantry under Emperor Paul
Paul I of Russia
Paul I was the Emperor of Russia between 1796 and 1801. He also was the 72nd Prince and Grand Master of the Order of Malta .-Childhood:...
.

Baron Otto Heinrich von Lieven (1726–1781) married in 1766 Baroness Charlotte von Gaugreben (1742–1828), who was entrusted by Emperor Paul with the task of educating his daughters and younger sons - Nicholas
Nicholas I of Russia
Nicholas I , was the Emperor of Russia from 1825 until 1855, known as one of the most reactionary of the Russian monarchs. On the eve of his death, the Russian Empire reached its historical zenith spanning over 20 million square kilometers...
and Mikhail Pavlovich. In recognition of her services Paul made her a countess in 1799. When her pupil Nicholas became the Emperor of Russia in 1826, the 84-year-old governess was made a Princess with the title of Her Serene Highness. The title was hereditary and passed to her descendants, of which the following were notable.