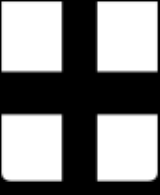 Encyclopedia
Baltische Landeswehr was the name of the unified armed forces
Armed forces
The armed forces of a country are its government-sponsored defense, fighting forces, and organizations. They exist to further the foreign and domestic policies of their governing body, and to defend that body and the nation it represents from external aggressors. In some countries paramilitary...
of the Couronian
Courland
Courland is one of the historical and cultural regions of Latvia. The regions of Semigallia and Selonia are sometimes considered as part of Courland.- Geography and climate :...
and Livonian nobility
Baltic nobility
The Baltic nobility was the privileged social class in the territories of today's Estonia and Latvia. It existed continuously since the medieval foundation of Terra Mariana...
from 7 December 1918 to 3 July 1919. 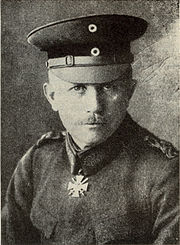 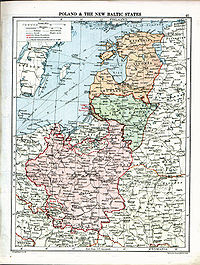 The Landeswehr was subordinated to the German
Ober Ost
Ober Ost is short for Oberbefehlshaber der gesamten Deutschen Streitkräfte im Osten, which is a German term meaning "Supreme Commander of All German Forces in the East" during World War I. In practice it refers not only to said commander, but also to his governing military staff and the district...
VI Reserve Corps commanded by Rüdiger von der Goltz
Rüdiger von der Goltz
Gustav Adolf Joachim Rüdiger, Graf von der Goltz was German Army general during World War I. After World War I he was the commander of the army of the Baltic German-established Government of Latvia, which played an instrumental role in the defeat of Russian Bolsheviks and their local allies in...
, a position he gained in on 1 February 1919. The commander of the Landeswehr during its operations was Major
Major
Major is a rank of commissioned officer, with corresponding ranks existing in almost every military in the world.When used unhyphenated, in conjunction with no other indicator of rank, the term refers to the rank just senior to that of an Army captain and just below the rank of lieutenant colonel. ...
Alfred Fletcher.

After the November 11, 1918, armistice
Armistice with Germany (Compiègne)
The armistice between the Allies and Germany was an agreement that ended the fighting in the First World War. It was signed in a railway carriage in Compiègne Forest on 11 November 1918 and marked a victory for the Allies and a complete defeat for Germany, although not technically a surrender...
the Inter-Allied Commission of Control
Military Inter-Allied Commission of Control
The term Military Inter-Allied Commission of Control was used in a series of peace treaties concluded after the First World War between different countries...
insisted that the German troops remain in the Baltic countries
Baltic countries
The term Baltic states refers to the Baltic territories which gained independence from the Russian Empire in the wake of World War I: primarily the contiguous trio of Estonia, Latvia, Lithuania ; Finland also fell within the scope of the term after initially gaining independence in the 1920s.The...
to prevent the region from being re-occupied by the Red Army
Red Army
The Workers' and Peasants' Red Army started out as the Soviet Union's revolutionary communist combat groups during the Russian Civil War of 1918-1922. It grew into the national army of the Soviet Union. By the 1930s the Red Army was among the largest armies in history.The "Red Army" name refers to...
. As the Soviet westward offensive of 1918–1919 approached, the Provisional Government of Latvia approached August Winnig, the German attorney in the Baltics, and signed an agreement with him authorising the organisation of land defense forces on 7 December 1918. The parties signed another agreement on 29 December which secured all foreign soldiers, who participated in the battles for the freedom of Latvia, full citizenship of Latvia. The arms, horse harness
Horse harness
A horse harness is a type of horse tack that allows a horse or other equine to pull various horse-drawn vehicles such as a carriage, wagon or sleigh. Harnesses may also be used to hitch animals to other loads such as a plow or canal boat....
and uniforms were to be supplied by the state of Germany. The food supplies were to be taken care of by the Provisional Government of Latvia.

In late February 1919 only the seaport of Liepāja
Liepaja
Liepāja ; ), is a republican city in western Latvia, located on the Baltic Sea directly at 21°E. It is the largest city in the Kurzeme Region of Latvia, the third largest city in Latvia after Riga and Daugavpils and an important ice-free port...
(Libau) and surroundings remained in the hands of the German and Latvian forces. In February and March 1919, the Landeswehr was able to win a series of victories over the Red Army
Red Army
The Workers' and Peasants' Red Army started out as the Soviet Union's revolutionary communist combat groups during the Russian Civil War of 1918-1922. It grew into the national army of the Soviet Union. By the 1930s the Red Army was among the largest armies in history.The "Red Army" name refers to...
, first occupying the port of Ventspils
Ventspils
Ventspils is a city in northwestern Latvia in the Courland historical region of Latvia, the sixth largest city in the country. As of 2006, Ventspils had a population of 43,806. Ventspils is situated on the Venta River and the Baltic Sea, and has an ice-free port...
(Windau), and then advancing south and east towards Riga
Riga
Riga is the capital and largest city of Latvia. With 702,891 inhabitants Riga is the largest city of the Baltic states, one of the largest cities in Northern Europe and home to more than one third of Latvia's population. The city is an important seaport and a major industrial, commercial,...
. The murder of three men of the Baltische Landeswehr led to the coup d'état
Coup d'état
A coup d'état state, literally: strike/blow of state)—also known as a coup, putsch, and overthrow—is the sudden, extrajudicial deposition of a government, usually by a small group of the existing state establishment—typically the military—to replace the deposed government with another body; either...
of April 16, 1919, by the proclamation of the Government of a Lutheran
Lutheranism
Lutheranism is a major branch of Western Christianity that identifies with the theology of Martin Luther, a German reformer. Luther's efforts to reform the theology and practice of the church launched the Protestant Reformation...
clergyman, Andrievs Niedra
Andrievs Niedra
Andrievs Niedra was a Latvian writer, Lutheran pastor and the Prime Minister of the German puppet government in Latvia between April and June 1919, during the Latvian War of Independence.Niedra's first collection of poems was published...
. Parleys, in which the United States
United States
The United States of America is a federal constitutional republic comprising fifty states and a federal district...
and the United Kingdom took part, did not prevent the advance on Riga and the capture of this city on May 22, where Baron Hans von Manteuffel made an entry with a small detachment, and died leading his men. Latvian national government was deposed while the Freikorps moved on to capture Riga on May 23, 1919. Latvians sought assistance from the Estonian People's Army
Military of Estonia
The Estonian Defence Forces is the name of the unified armed forces of the Republic of Estonia. The Estonian military is a defence force consisting of Maavägi , Merevägi , Õhuvägi and a paramilitary organization Kaitseliit...
(Eesti Rahvavägi) which had been occupying Northern Latvia since earlier that year. After the Bolshevik
Bolshevik
The Bolsheviks, originally also Bolshevists , derived from bol'shinstvo, "majority") were a faction of the Marxist Russian Social Democratic Labour Party which split apart from the Menshevik faction at the Second Party Congress in 1903....
s had been driven out from most of Latvia, the Allies ordered the German government to withdraw its troops from the Baltic region. However, the Germans succeeded in negotiating a postponement, arguing that this would have given the Bolsheviks a free hand. In June 1919, General von der Goltz ordered his troops not to advance east against the Red Army, as the Allies
Allies
In everyday English usage, allies are people, groups, or nations that have joined together in an association for mutual benefit or to achieve some common purpose, whether or not explicit agreement has been worked out between them...
had been expecting, but north, against the Estonians. On June 19, the Landeswehr launched an attack to capture areas around Cēsis
Cesis
Cēsis , is a town in Latvia located in the northern part of the Central Vidzeme Upland. Cēsis is on the Gauja River valley, and is built on a series of ridges above the river overlooking the woods below...
(Wenden), however in the battles over the following few days they were defeated by the Estonian 3rd Division, including the Latvian 2nd Cesis regiment, led by Ernst Põdder
Ernst Põdder
Ernst Põdder VR I/1 was a famous Estonian military commander in the Estonian War of Independence....
. On the morning of June 23, the Germans began a general retreat toward Riga. The Allies again insisted that the Germans withdraw their remaining troops from Latvia and intervened to impose a ceasefire between the Estonians and the Landeswehr when the Estonians were about to march into Riga. In the meantime, an Allied mission composed of British troops under General Sir Hubert de la Poer Gough had arrived in the Baltic with the task of clearing the Germans from the region and organizing native armies for the Baltic States. To ensure its return to Latvian control, the Baltische Landeswehr was placed under British authority.