Encyclopedia
The Lenbachhaus in Munich
Munich
Munich The city's motto is "" . Before 2006, it was "Weltstadt mit Herz" . Its native name, , is derived from the Old High German Munichen, meaning "by the monks' place". The city's name derives from the monks of the Benedictine order who founded the city; hence the monk depicted on the city's coat...
houses an art museum and is part of Munich's "Kunstareal
Kunstareal
The Kunstareal is a museum quarter in the city centre of Munich, Germany.It consists of the three "Pinakotheken" galleries , the Glyptothek, the Staatliche Antikensammlung , the Lenbachhaus, the Museum Brandhorst and...
" (the "art area").

The Lenbachhaus was built as a Florentine-style villa for the painter Franz von Lenbach
Franz von Lenbach
Franz von Lenbach was a German painter of Realist style.-Biography:Lenbach was born at Schrobenhausen, in Bavaria. His father was a mason, and the boy was intended to follow his father's trade or be a builder. With this view he was sent to school at Landsberg, and then to the polytechnic at Augsburg...
between 1887 and 1891 by Gabriel von Seidl. Some of the rooms of the villa still have kept their original design.

The city of Munich acquired the building in 1924, and today, the Lenbach Haus houses the city's gallery. The Lenbachhaus was expanded 1927-1929 by Hans Grässel
Hans Grässel
Hans Grässel was a German architect. Grässel studied and performed almost his entire career in Munich, and as the council architect of the city he created a series of cemeteries of which Munich Waldfriedhof , opened in 1907, is well-known for being the first woodland cemetery...
and again 1969-1972 by Heinrich Volbehr and Rudolf Thönessen. The latest wing was closed to the public in 2009 to allow the expansion and restoration of the Lenbachhaus by Norman Foster
Norman Foster, Baron Foster of Thames Bank
Norman Robert Foster, Baron Foster of Thames Bank, OM is a British architect whose company maintains an international design practice, Foster + Partners....
. Construction started May, 2009, and the scheduled reopening is November, 2011. Currently, the house is not accessible to the public. The architect has decided to place the new main entrance on Museumsplatz in front of the Propylaea
Propylaea (Munich)
The Propylaea is a gate in Munich at the west side of Koenigsplatz.- History :The building constructed in Doric order was completed by Leo von Klenze in 1862 and evokes the monumental entrance of the Propylaea for the Athenian Acropolis...
.

The gallery contains a variety of works by Munich painters and contemporary artists, in styles such as The Blue Rider and New Objectivity.

The gallery displays masterpieces by Munich artists such as Jan Polack
Jan Polack
Jan Polack Johannes Polack , was a 15th-century painter....
, Christoph Schwarz
Christoph Schwarz
Christoph Schwartz, Schwarz, or Schovarts was a German court painter.-Biography:Houbraken remarked that he died the same year that Adrian de Bie was born. He took his information from Joachim von Sandrart's Teutsche Akademie...
, Georges Desmarees ("Countess Holstein" 1754), Wilhelm von Kobell
Wilhelm von Kobell
Wilhelm von Kobell was a German painter, printmaker and teacher.-Biography:Kobell was born in Mannheim, the son of Ferdinand Kobell, a landscape painter who cited Claude Lorrain as his influence. Wilhelm's initial lessons were supplied by his father and his uncle, Franz Kobell...
, Georg von Dillis, Carl Rottmann
Carl Rottmann
Carl Anton Joseph Rottmann was a German landscape painter and the most famous member of the Rottmann family of painters....
, Carl Spitzweg
Carl Spitzweg
Carl Spitzweg was a German romanticist painter and poet. He is considered to be one of the most important artists of the Biedermeier era....
, Eduard Schleich, Carl Theodor von Piloty, Franz von Stuck, Franz von Lenbach
Franz von Lenbach
Franz von Lenbach was a German painter of Realist style.-Biography:Lenbach was born at Schrobenhausen, in Bavaria. His father was a mason, and the boy was intended to follow his father's trade or be a builder. With this view he was sent to school at Landsberg, and then to the polytechnic at Augsburg...
, Friedrich August von Kaulbach
Friedrich August von Kaulbach
Friedrich August von Kaulbach was a German portraitist and historical painter. He was the son of Theodor Friedrich Wilhelm Christian Kaulbach , the court painter at Hannover, and the great nephew of Wilhelm Kaulbach, another prominent member of the Kaulbach family of artists...
, Wilhelm Leibl
Wilhelm Leibl
Wilhelm Maria Hubertus Leibl was a German realist painter of portraits and scenes of peasant life.Leibl was born in Cologne and in 1861 began his first training with Hermann Becker, a local painter. He entered the Munich Academy in 1864, subsequently studying with several artists including Carl...
, Wilhelm Trübner
Wilhelm Trübner
Wilhelm Trübner was a German realist painter of the circle of Wilhelm Leibl.Trübner was born in Heidelberg and had early training as a goldsmith. In 1867 he met classicist painter Anselm Feuerbach who encouraged him to study painting, and he began studies in Karlsruhe under Fedor Dietz...
and Hans Thoma
Hans Thoma
Hans Thoma was a German painter.-Biography:He was born in Bernau in the Black Forest, Germany. Having started life as a painter of clock-faces, he entered in 1859 the Karlsruhe academy, where he studied under Schirmer and Des Coudres...
. 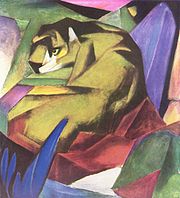 The Lenbachhaus is most famous for the large collection of paintings by Der Blaue Reiter
Der Blaue Reiter
Der Blaue Reiter was a group of artists from the Neue Künstlervereinigung München in Munich, Germany. The group was founded by a number of Russian emigrants, including Wassily Kandinsky, Alexej von Jawlensky, Marianne von Werefkin, and native German artists, such as Franz Marc, August Macke and...
(The Blue Rider), a group of expressionist artists established in Munich in 1911 which included, among others, the painters Wassily Kandinsky
Wassily Kandinsky
Wassily Wassilyevich Kandinsky was an influential Russian painter and art theorist. He is credited with painting the first purely-abstract works. Born in Moscow, Kandinsky spent his childhood in Odessa. He enrolled at the University of Moscow, studying law and economics...
, Gabriele Münter
Gabriele Münter
Gabriele Münter was a German expressionist painter who was at the forefront of the Munich avant-garde in the early 20th century. Artists and writers associated with German Expressionism shared a rebellious attitude toward the materialism and mores of German imperial and bourgeois society...
, Franz Marc
Franz Marc
Franz Marc was a German painter and printmaker, one of the key figures of the German Expressionist movement...
, August Macke
August Macke
August Macke was one of the leading members of the German Expressionist group Der Blaue Reiter . He lived during a particularly innovative time for German art which saw the development of the main German Expressionist movements as well as the arrival of the successive avant-garde movements which...
, Marianne von Werefkin
Marianne von Werefkin
Marianne von Werefkin , born Marianna Wladimirowna Werewkina , was a Russian-Swiss Expressionist painter.-Life and career:...
, and Paul Klee
Paul Klee
Paul Klee was born in Münchenbuchsee, Switzerland, and is considered both a German and a Swiss painter. His highly individual style was influenced by movements in art that included expressionism, cubism, and surrealism. He was, as well, a student of orientalism...
.

Young artists are promoted in exhibitions in the affiliated Kunstbau above the Subway Station Königsplatz
Königsplatz
Königsplatz is a square in Munich, Germany.-Architecture:The square was designed with the creation of the Brienner Straße at the command of Crown Prince Ludwig of Bavaria by Karl von Fischer and laid out by Leo von Klenze....
.