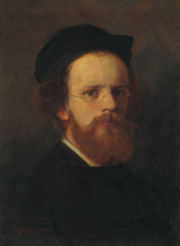 Franz von Lenbach was a German
Germany
Germany , officially the Federal Republic of Germany , is a federal parliamentary republic in Europe. The country consists of 16 states while the capital and largest city is Berlin. Germany covers an area of 357,021 km2 and has a largely temperate seasonal climate...
painter
Painting
Painting is the practice of applying paint, pigment, color or other medium to a surface . The application of the medium is commonly applied to the base with a brush but other objects can be used. In art, the term painting describes both the act and the result of the action. However, painting is...
of Realist style
Realism (visual arts)
Realism in the visual arts is a style that depicts the actuality of what the eyes can see. The term is used in different senses in art history; it may mean the same as illusionism, the representation of subjects with visual mimesis or verisimilitude, or may mean an emphasis on the actuality of...
.

Lenbach was born at Schrobenhausen
Schrobenhausen
Schrobenhausen is a town in the Neuburg-Schrobenhausen district, in Bavaria, Germany. It is situated on the river Paar, approx. 25 km southwest of Ingolstadt, and 35 km northeast of Augsburg....
, in Bavaria
Kingdom of Bavaria
The Kingdom of Bavaria was a German state that existed from 1806 to 1918. The Bavarian Elector Maximilian IV Joseph of the House of Wittelsbach became the first King of Bavaria in 1806 as Maximilian I Joseph. The monarchy would remain held by the Wittelsbachs until the kingdom's dissolution in 1918...
. His father was a mason, and the boy was intended to follow his father's trade or be a builder. With this view he was sent to school at Landsberg
Landsberg
Landsberg may refer to:* Landsberg , Bavaria, Germany* Landsberg, Saxony-Anhalt, Germany* the Margraviate of Landsberg, Holy Roman Empire* Landsberg am Lech, Bavaria, Germany* Landsberg an der Warthe, German name of Gorzów Wielkopolski, Poland...
, and then to the polytechnic at Augsburg
Augsburg
Augsburg is a city in the south-west of Bavaria, Germany. It is a university town and home of the Regierungsbezirk Schwaben and the Bezirk Schwaben. Augsburg is an urban district and home to the institutions of the Landkreis Augsburg. It is, as of 2008, the third-largest city in Bavaria with a...
. But after seeing Hofner, the animal painter, executing some studies, he made various attempts at painting, which his father's orders interrupted. However, when he had seen the galleries of Augsburg and Munich, he finally obtained his father's permission to become an artist, and worked for a short time in the studio of Gräfle
Albert Gräfle
Albert Gräfle was a German historical, genre, and portrait painter.-Biography:He was born at Freiburg, where he studied philosophy at the university. In 1827, he became the pupil of Peter von Cornelius and Julius Schnorr von Carolsfeld at the Munich Academy, and from 1840 studied under Franz Xaver...
, the painter; after this he devoted much time to copying.

Thus he was already accomplished in technique when he became the pupil of Piloty
Karl von Piloty
Karl Theodor von Piloty was a German painter.Von Piloty was born in Munich. His father, Ferdinand Piloty , enjoyed a great reputation as a lithographer. In 1840, Karl was admitted as a student of the Munich Academy, under the artists Karl Schorn and Julius Schnorr von Karolsfeld...
, with whom he set out for Italy
Italy
Italy , officially the Italian Republic languages]] under the European Charter for Regional or Minority Languages. In each of these, Italy's official name is as follows:;;;;;;;;), is a unitary parliamentary republic in South-Central Europe. To the north it borders France, Switzerland, Austria and...
in 1858. A few interesting works remain as the outcome of this first journey A Peasant seeking Shelter from Bad Weather (1855), The Goatherd (1860, in the Schack Gallery, Munich) and The Arch of Titus (in the Palfy collection, Budapest). On returning to Munich
Munich
Munich The city's motto is "" . Before 2006, it was "Weltstadt mit Herz" . Its native name, , is derived from the Old High German Munichen, meaning "by the monks' place". The city's name derives from the monks of the Benedictine order who founded the city; hence the monk depicted on the city's coat...
, he was at once called to Weimar
Weimar
Weimar is a city in Germany famous for its cultural heritage. It is located in the federal state of Thuringia , north of the Thüringer Wald, east of Erfurt, and southwest of Halle and Leipzig. Its current population is approximately 65,000. The oldest record of the city dates from the year 899...
to take the appointment of professor at the Academy
Academy of Fine Arts, Munich
The Academy of Fine Arts, Munich was founded 1808 by Maximilian I Joseph of Bavaria in Munich as the "Royal Academy of Fine Arts" and is one of the oldest and most significant art academies in Germany...
. But he did not hold it long, having made the acquaintance of Count Schack, who commissioned a great number of copies for his collection.

Lenbach returned to Italy the same year, and there copied many famous pictures. He set out in 1867 for Spain
Spain
Spain , officially the Kingdom of Spain languages]] under the European Charter for Regional or Minority Languages. In each of these, Spain's official name is as follows:;;;;;;), is a country and member state of the European Union located in southwestern Europe on the Iberian Peninsula...
, where he copied not only the famous pictures by Velázquez
Diego Velázquez
Diego Rodríguez de Silva y Velázquez was a Spanish painter who was the leading artist in the court of King Philip IV. He was an individualistic artist of the contemporary Baroque period, important as a portrait artist...
in the Prado, but also some landscapes in the museums of Granada
Granada
Granada is a city and the capital of the province of Granada, in the autonomous community of Andalusia, Spain. Granada is located at the foot of the Sierra Nevada mountains, at the confluence of three rivers, the Beiro, the Darro and the Genil. It sits at an elevation of 738 metres above sea...
and the Alhambra
Alhambra
The Alhambra , the complete form of which was Calat Alhambra , is a palace and fortress complex located in the Granada, Andalusia, Spain...
(1868).

In the previous year he had exhibited at the great exhibition at Paris
Paris
Paris is the capital and largest city in France, situated on the river Seine, in northern France, at the heart of the Île-de-France region...
several portraits, one of which took a third-class medal. Thereafter he exhibited frequently both at Munich and at Vienna, and in 1900 at the Paris exhibition was awarded a Grand Prix for painting. Lenbach, who died in 1904, painted many of the most remarkable personages of his time (including Bismarck
Otto von Bismarck
Otto Eduard Leopold, Prince of Bismarck, Duke of Lauenburg , simply known as Otto von Bismarck, was a Prussian-German statesman whose actions unified Germany, made it a major player in world affairs, and created a balance of power that kept Europe at peace after 1871.As Minister President of...
).
The source of this article is wikipedia, the free encyclopedia.  The text of this article is licensed under the GFDL.