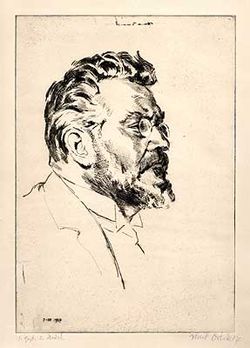 Max Slevogt was a German
Germany
Germany , officially the Federal Republic of Germany , is a federal parliamentary republic in Europe. The country consists of 16 states while the capital and largest city is Berlin. Germany covers an area of 357,021 km2 and has a largely temperate seasonal climate...
Impressionist
Impressionism
Impressionism was a 19th-century art movement that originated with a group of Paris-based artists whose independent exhibitions brought them to prominence during the 1870s and 1880s...
painter and illustrator, best known for his landscape
Landscape art
Landscape art is a term that covers the depiction of natural scenery such as mountains, valleys, trees, rivers, and forests, and especially art where the main subject is a wide view, with its elements arranged into a coherent composition. In other works landscape backgrounds for figures can still...
s. He was, together with Lovis Corinth
Lovis Corinth
Lovis Corinth was a German painter and printmaker whose mature work realized a synthesis of impressionism and expressionism....
and Max Liebermann
Max Liebermann
Max Liebermann was a German-Jewish painter and printmaker best known for his etching and lithography.-Biography:...
, one of the foremost representatives in Germany of the plein air style.

He was born in Landshut
Landshut
Landshut is a city in Bavaria in the south-east of Germany, belonging to both Eastern and Southern Bavaria. Situated on the banks of the River Isar, Landshut is the capital of Lower Bavaria, one of the seven administrative regions of the Free State of Bavaria. It is also the seat of the...
, Germany. From 1885–89 he studied at the Munich
Munich
Munich The city's motto is "" . Before 2006, it was "Weltstadt mit Herz" . Its native name, , is derived from the Old High German Munichen, meaning "by the monks' place". The city's name derives from the monks of the Benedictine order who founded the city; hence the monk depicted on the city's coat...
Academy, and his early paintings are dark in tone, exemplifying the prevailing style in Munich. In 1889 Slevogt visited Paris
Paris
Paris is the capital and largest city in France, situated on the river Seine, in northern France, at the heart of the Île-de-France region...
, where he attended the Académie Julian
Académie Julian
The Académie Julian was an art school in Paris, France.Rodolphe Julian established the Académie Julian in 1868 at the Passage des Panoramas, as a private studio school for art students. The Académie Julian not only prepared students to the exams at the prestigious École des Beaux-Arts, but offered...
. In 1896, he drew caricatures for the magazines Simplicissimus
Simplicissimus
Simplicissimus was a satirical German weekly magazine started by Albert Langen in April 1896 and published through 1967, with a hiatus from 1944-1954. It became a biweekly in 1964...
and Jugend, and the next year he had his first solo exhibition in Vienna
Vienna
Vienna is the capital and largest city of the Republic of Austria and one of the nine states of Austria. Vienna is Austria's primary city, with a population of about 1.723 million , and is by far the largest city in Austria, as well as its cultural, economic, and political centre...
.

Toward the end of the 1890s his palette brightened. He travelled again to Paris in 1900, where he was represented in the German pavilion of the world exhibition with the work Scheherezade, and was greatly impressed by the paintings of Édouard Manet
Édouard Manet
Édouard Manet was a French painter. One of the first 19th-century artists to approach modern-life subjects, he was a pivotal figure in the transition from Realism to Impressionism....
. In 1901 he joined the Berlin Secession
Berlin Secession
The Berlin Secession was an art association founded by Berlin artists in 1898 as an alternative to the conservative state-run Association of Berlin Artists. That year the official salon jury rejected a landscape by Walter Leistikow, who was a key figure amongst a group of young artists interested...
.

A trip to Egypt
Egypt
Egypt , officially the Arab Republic of Egypt, Arabic: , is a country mainly in North Africa, with the Sinai Peninsula forming a land bridge in Southwest Asia. Egypt is thus a transcontinental country, and a major power in Africa, the Mediterranean Basin, the Middle East and the Muslim world...
in 1914 resulted in 21 paintings as well as numerous watercolors and drawings; on the return journey he stopped off in Italy
Italy
Italy , officially the Italian Republic languages]] under the European Charter for Regional or Minority Languages. In each of these, Italy's official name is as follows:;;;;;;;;), is a unitary parliamentary republic in South-Central Europe. To the north it borders France, Switzerland, Austria and...
. In June he acquired the country seat Neukastel.
After the outbreak of World War I
World War I
World War I , which was predominantly called the World War or the Great War from its occurrence until 1939, and the First World War or World War I thereafter, was a major war centred in Europe that began on 28 July 1914 and lasted until 11 November 1918...
he was sent as official war painter to the western front. The war experience brought about a search for new style appropriate to the expression of the horrors of war. In the same year he became a member of the royal academy of the arts in Berlin.

He designed scenery for the performance of Mozart's Don Giovanni
Don Giovanni
Don Giovanni is an opera in two acts with music by Wolfgang Amadeus Mozart and with an Italian libretto by Lorenzo Da Ponte. It was premiered by the Prague Italian opera at the Teatro di Praga on October 29, 1787...
in the Dresdner state opera in 1924. In 1929 he was given a large 60th birthday exhibition in the Prussian academy of the arts in Berlin. During the last year of his life he worked on the religious mural Golgatha in the peace church in Ludwigshafen on the Rhine. It was destroyed by bombing raids during World War II
World War II
World War II, or the Second World War , was a global conflict lasting from 1939 to 1945, involving most of the world's nations—including all of the great powers—eventually forming two opposing military alliances: the Allies and the Axis...
.

Max Slevogt died at Leinsweiler
Leinsweiler
Leinsweiler is a municipality in Südliche Weinstraße district, in Rhineland-Palatinate, western Germany. With other small villages, it forms the “Verbandsgemeinde” Landau-Land. ....
(at that time as “Rheinpfalz” part of Bavaria
Bavaria
Bavaria, formally the Free State of Bavaria is a state of Germany, located in the southeast of Germany. With an area of , it is the largest state by area, forming almost 20% of the total land area of Germany...
) in 1932. He is buried in the burial place of the family Finkler east of his house, the so called Slevogthof (with wall paintings) at Neukastel.