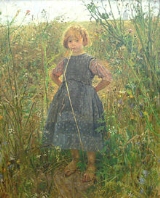 Encyclopedia
Fritz von Uhde was a German
Germany
Germany , officially the Federal Republic of Germany , is a federal parliamentary republic in Europe. The country consists of 16 states while the capital and largest city is Berlin. Germany covers an area of 357,021 km2 and has a largely temperate seasonal climate...
painter
Painting
Painting is the practice of applying paint, pigment, color or other medium to a surface . The application of the medium is commonly applied to the base with a brush but other objects can be used. In art, the term painting describes both the act and the result of the action. However, painting is...
of genre and religious subjects. His style lay between Realism and Impressionism
Impressionism
Impressionism was a 19th-century art movement that originated with a group of Paris-based artists whose independent exhibitions brought them to prominence during the 1870s and 1880s...
. 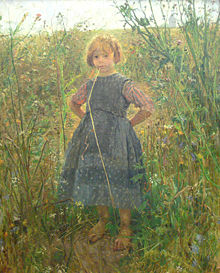 Uhde was born in Wolkenburg, Saxony
Saxony
The Free State of Saxony is a landlocked state of Germany, contingent with Brandenburg, Saxony Anhalt, Thuringia, Bavaria, the Czech Republic and Poland. It is the tenth-largest German state in area, with of Germany's sixteen states....
. In 1866 he was admitted to the Academy of Fine Arts in Dresden
Dresden
Dresden is the capital city of the Free State of Saxony in Germany. It is situated in a valley on the River Elbe, near the Czech border. The Dresden conurbation is part of the Saxon Triangle metropolitan area....
. Totally at variance with the spirit prevailing there, later that year he left his studies for military service, and from 1867 to 1877 he was a professor of horsemanship to the regiment of the assembled guard. He moved to Munich
Munich
Munich The city's motto is "" . Before 2006, it was "Weltstadt mit Herz" . Its native name, , is derived from the Old High German Munichen, meaning "by the monks' place". The city's name derives from the monks of the Benedictine order who founded the city; hence the monk depicted on the city's coat...
in 1877 to attend the Academy of Fine Arts. In Munich, he particularly admired the Dutch old masters
Dutch Golden Age painting
Dutch Golden Age painting is the painting of the Dutch Golden Age, a period in Dutch history generally spanning the 17th century, during and after the later part of the Eighty Years War for Dutch independence. The new Dutch Republic was the most prosperous nation in Europe, and led European trade,...
. Unsuccessful in his attempts to gain admittance to the studios of either Piloty or Diez, in 1879 he travelled to Paris
Paris
Paris is the capital and largest city in France, situated on the river Seine, in northern France, at the heart of the Île-de-France region...
where his studies of the Dutch painters continued under Mihály Munkácsy
Mihály Munkácsy
Mihály Munkácsy was a Hungarian painter, who lived in Paris and earned international reputation with his genre pictures and large scale biblical paintings.-Early Years of Munkácsy:...
's supervision. He worked for a short time in that master's studio, but principally studied from nature and his old Netherland models. In 1882 a journey to Holland brought about a change in his style, as he abandoned the dark chiaroscuro
Chiaroscuro
Chiaroscuro in art is "an Italian term which literally means 'light-dark'. In paintings the description refers to clear tonal contrasts which are often used to suggest the volume and modelling of the subjects depicted"....
he had learned in Munich in favor of a colorism informed by the works of the French Impressionists. The new coloristic principles which he adopted are apparent in the “Arrival of the Organ-Grinder” (1883).

His work was often rejected by the official art criticism, and by the public, because his representations of ordinary scenes were considered vulgar or ugly. The critic Otto Julius Bierbaum was more sympathetic; in 1893, he wrote, "As a painter of children, for example, Uhde is extraordinarily distinguished. He does not depict them as sweetly as used to be popular; in other words not as amusing or charming dolls, but with extreme, very strict naturalness."

In about 1890, Uhde became a professor at the Academy of Fine Arts in Munich. He was, with Max Slevogt
Max Slevogt
Max Slevogt was a German Impressionist painter and illustrator, best known for his landscapes. He was, together with Lovis Corinth and Max Liebermann, one of the foremost representatives in Germany of the plein air style.-Biography:He was born in Landshut, Germany...
and Lovis Corinth
Lovis Corinth
Lovis Corinth was a German painter and printmaker whose mature work realized a synthesis of impressionism and expressionism....
, one of the leading figures in the Munich Secession
Sezession
Secession refers to a number of modernist artist groups that separated from the support of official academic art and its administrations in the late 19th and early 20th century....
, and later joined the Berlin Secession
Berlin Secession
The Berlin Secession was an art association founded by Berlin artists in 1898 as an alternative to the conservative state-run Association of Berlin Artists. That year the official salon jury rejected a landscape by Walter Leistikow, who was a key figure amongst a group of young artists interested...
as well. Uhde became an honorary member of the academies of Munich, Dresden and Berlin. Progressing in his naturalistic conception, Uhde gave rise to a complete change in German art, counting among his followers most of the younger generation. He died in Munich in 1911.

Uhde's inclination was from the first directed towards religious subjects. He revived the practice of treating Biblical
Bible
The Bible refers to any one of the collections of the primary religious texts of Judaism and Christianity. There is no common version of the Bible, as the individual books , their contents and their order vary among denominations...
episodes realistically by transferring them to modern days. Thus in the “Come, Lord Jesus, be our Guest,” of the Berlin National Gallery
Alte Nationalgalerie
The Alte Nationalgalerie in Berlin is a gallery showing a collection of Classical, Romantic, Biedermeier, Impressionist and early Modernist artwork, all of which belong to the Staatliche Museen zu Berlin. The museum is situated on Museum Island, a UNESCO-designated World Heritage Site.- Founding...
, Christ appears among the peasant family assembled for their meal in a modern German farmhouse “parlour,” and in “The Sermon on the Mount” (Berlin, private collection) addresses a crowd of 19th century harvesters. Similar in conception are “Suffer Little Children to come unto Me” (Leipzig Museum
Museum der bildenden Künste
The Museum der bildenden Künste is a museum in Leipzig, Saxony, Germany. On 7,000 square meters of display area, 3,500 paintings, 1,000 sculptures and 60,000 graphical works are shown...
), “The Holy Night” (Dresden Gallery), “The Last Supper,” “The Journey to Bethlehem” (Munich Pinakothek
Neue Pinakothek
The Neue Pinakothek is an art museum in Munich, Germany. Its focus is European Art of the 18th and 19th century and is one of the most important museums of art of the nineteenth century in the world...
) and “The Miraculous Draught of Fishes.” Other works of his in public collections are: “Saying Grace,” at the Musée d'Orsay
Musée d'Orsay
The Musée d'Orsay is a museum in Paris, France, on the left bank of the Seine. It is housed in the former Gare d'Orsay, an impressive Beaux-Arts railway station built between 1898 and 1900. The museum holds mainly French art dating from 1848 to 1915, including paintings, sculptures, furniture,...
in Paris; “Christ at Emmaus,” at the Staedel Institute, Frankfort; “The Farewell of Tobias,” at the Liechtenstein Gallery
Liechtenstein Castle
Liechtenstein Castle is a castle located near Maria Enzersdorf in Lower Austria bordering Vienna. It is located on the edge of the Wienerwald...
, Vienna; and a portrait of the actor Wohlmuth, at the Christiania Museum
National Museum of Denmark
The National Museum of Denmark in Copenhagen is Denmark’s largest museum of cultural history, comprising the histories of Danish and foreign cultures, alike. The museum's main domicile is located a short distance from Strøget at the center of Copenhagen. It contains exhibits from around the world,...
.
Later works include: “Noli me tangere” (1894, New Pinakothek, Munich). “The Wise Men from the East” (1896, Magdeburg Museum), “The Last Supper” (1897, Stuttgart Museum), “Ascension” (1898, New Pinakothek, Munich), and “Woman, Why Weepest Thou?” (1900, Vienna Museum).