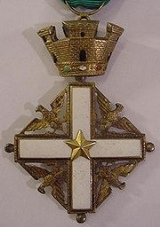 The degrees of knighthood, not all of which apply to all orders, are Knight (Cavaliere abbreviated Cav.), Officer (Ufficiale abbreviated Uff.), Commander (Commendatore abbreviated Comm.), Grand Officer (Gr. Uff.), Knight Grand Cross (Cav. Gr. Croce) and Knight Grand Cross with cordon. Italian citizens may not use in the territory of the Republic honours or distinctions conferred on them by non-national orders or foreign states, unless authorised by decree President of the Council of Ministers
Prime minister of Italy
The Prime Minister of Italy is the head of government of the Italian Republic...
. The use of awards of the Holy See
Holy See
The Holy See is the episcopal jurisdiction of the Catholic Church in Rome, in which its Bishop is commonly known as the Pope. It is the preeminent episcopal see of the Catholic Church, forming the central government of the Church. As such, diplomatically, and in other spheres the Holy See acts and...
(including the Equestrian Order of the Holy Sepulchre) is subject to permission, while the use of those of the Sovereign Military Order of Malta is unregulated.

The Order of Merit of the Italian Republic effectively replaced as national orders the Supreme Order of the Most Holy Annunciation (1362), the Order of Saints Maurice and Lazarus (1572) and the Order of the Crown of Italy (1868), which the sovereign, as fons honorum, did not abdicate. Today these continue merely as dynastic orders of the former Royal house in exile. While their bestowal is suppressed by law in Italy, the continued use of those decorations conferred prior to 1951 is permitted, exclusive of any right of precedence in official ceremonies.

The Sardinian
Kingdom of Sardinia
The Kingdom of Sardinia consisted of the island of Sardinia first as a part of the Crown of Aragon and subsequently the Spanish Empire , and second as a part of the composite state of the House of Savoy . Its capital was originally Cagliari, in the south of the island, and later Turin, on the...
orders of the Most Holy Annunciation, of Saints Maurice and Lazarus and the Military and Civil orders of Savoy were continued on the unification of Italy
Italian unification
Italian unification was the political and social movement that agglomerated different states of the Italian peninsula into the single state of Italy in the 19th century...
in 1861. These were augmented during the Liberal period by the Order of the Crown of Italy, the Chivalrous Order of Agricultural, Industrial and Commercial Merit, the Colonial Order of the Star of Italy and later, by the Civil and Military Order of the Roman Eagle. In contrast to the Republican orders, the feminine style Dama is used for women.

The Knight Bachelor
Knight Bachelor
The rank of Knight Bachelor is a part of the British honours system. It is the most basic rank of a man who has been knighted by the monarch but not as a member of one of the organised Orders of Chivalry...
, usually transmitted by male primogeniture
Primogeniture
Primogeniture is the right, by law or custom, of the firstborn to inherit the entire estate, to the exclusion of younger siblings . Historically, the term implied male primogeniture, to the exclusion of females...
, was similar to a British baronetcy but older. These Cavaliere Ereditario were not, however, members of an order of chivalry.