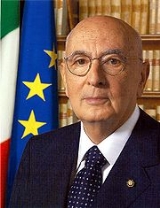 Encyclopedia
The President of the Italian Republic is the head of state
Head of State
A head of state is the individual that serves as the chief public representative of a monarchy, republic, federation, commonwealth or other kind of state. His or her role generally includes legitimizing the state and exercising the political powers, functions, and duties granted to the head of...
of Italy
Italy
Italy , officially the Italian Republic languages]] under the European Charter for Regional or Minority Languages. In each of these, Italy's official name is as follows:;;;;;;;;), is a unitary parliamentary republic in South-Central Europe. To the north it borders France, Switzerland, Austria and...
and, as such, is intended to represent national unity and guarantee that Italian politics comply with the Constitution. The president's term of office lasts for seven years.

The President of the Republic is elected by Parliament in joint session of the Chamber
Italian Chamber of Deputies
The Italian Chamber of Deputies is the lower house of the Parliament of Italy. It has 630 seats, a plurality of which is controlled presently by liberal-conservative party People of Freedom. Twelve deputies represent Italian citizens outside of Italy. Deputies meet in the Palazzo Montecitorio. A...
and the Senate
Italian Senate
The Senate of the Republic is the upper house of the Italian Parliament. It was established in its current form on 8 May 1948, but previously existed during the Kingdom of Italy as Senato del Regno , itself a continuation of the Senato Subalpino of Sardinia-Piedmont established on 8 May 1848...
, integrated with 58 representatives appointed by the twenty Italian regions: three representatives of each region
Regions of Italy
The regions of Italy are the first-level administrative divisions of the state, constituting its first NUTS administrative level. There are twenty regions, of which five are constitutionally given a broader amount of autonomy granted by special statutes....
(except for the Aosta Valley, which gets only one representative) in such a way as to guarantee representation to local autonomies and minorities.

According to the Italian Constitution
Constitution of Italy
The Constitution of the Italian Republic was enacted by the Constituent Assembly on 22 December 1947, with 453 votes in favour and 62 against. The text, which has since been amended 13 times, was promulgated in the extraordinary edition of Gazzetta Ufficiale No. 298 on 27 December 1947...
, the election must be held in the form of secret ballot, with the 315 Senators, the 630 Deputies and the 58 regional representatives allowed to cast their votes.

To achieve the maximum consensus for an institution intended to guarantee the upholding of the constitution, in the first three ballots a two-thirds vote is required. After that, a majority suffices.

The election is conducted by the Speaker of the Chamber of Deputies, who has the authority to proceed to the public counting of the votes. The presidential mandate lasts seven years.

The President takes office after having taken an oath before Parliament, and delivering to it a presidential address.


The President’s term lasts seven years; this prevents any president from being elected by the same Houses, which have a five-year mandate, and grants some freedom from excessive political ties to the appointing body.

In addition to the natural end, the mandate can be stopped by:

In the absence of the President of the Republic, including travel abroad, its functions have been performed by the President of the Senate
Italian Senate
The Senate of the Republic is the upper house of the Italian Parliament. It was established in its current form on 8 May 1948, but previously existed during the Kingdom of Italy as Senato del Regno , itself a continuation of the Senato Subalpino of Sardinia-Piedmont established on 8 May 1848...
.

The Constitution provides that every presidential act must be countersigned by a Minister or the President of the Council, as most of its acts are only formal, and political responsibility is upon the government. Pardons and commutations have been recognised as autonomous powers of the President, not subject to countersignature.

The President resides in Rome
Rome
Rome is the capital of Italy and the country's largest and most populated city and comune, with over 2.7 million residents in . The city is located in the central-western portion of the Italian Peninsula, on the Tiber River within the Lazio region of Italy.Rome's history spans two and a half...
at the Quirinal Palace
Quirinal Palace
The Quirinal Palace is a historical building in Rome, Italy, the current official residence of the President of the Italian Republic. It is located on the Quirinal Hill, the tallest of the seven hills of Rome...
, and also has at his disposal the presidential holdings of Castelporziano, near Rome, and Villa Rosebery
Villa Rosebery
The Villa Rosebery is one of the three official residences of the President of the Italian Republic ....
, in Naples
Naples
Naples is a city in Southern Italy, situated on the country's west coast by the Gulf of Naples. Lying between two notable volcanic regions, Mount Vesuvius and the Phlegraean Fields, it is the capital of the region of Campania and of the province of Naples...
.