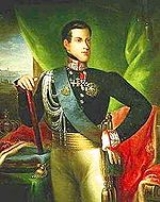 He was born in Turin
Turin
Turin is a city and major business and cultural centre in northern Italy, capital of the Piedmont region, located mainly on the left bank of the Po River and surrounded by the Alpine arch. The population of the city proper is 909,193 while the population of the urban area is estimated by Eurostat...
in 1798, to Charles Emmanuel, Prince of Carignano and Maria Cristina of Saxony. His father was a fifth-generation descendant of Thomas Francis, Prince of Carignano
Thomas Francis, Prince of Carignano
Thomas Francis of Savoy was an Italian military commander, the founder of the Savoy-Carignano branch of the House of Savoy which reigned as kings of Sardinia from 1831 to 1861, and as kings of Italy from 1861 until the...
, founder of the Savoy-Carignano
Savoy-Carignano
The Savoy-Carignano family , was a junior line of the House of Savoy. It was founded by Thomas Francis of Savoy, Prince di Carignano 21 December 1596 - 22 January 1656), an Italian military commander...
line of the House of Savoy
House of Savoy
The House of Savoy was formed in the early 11th century in the historical Savoy region. Through gradual expansion, it grew from ruling a small county in that region to eventually rule the Kingdom of Italy from 1861 until the end of World War II, king of Croatia and King of Armenia...
. Because none of the sons of Victor Amadeus III themselves had sons, Charles Albert was throughout his life known to be their likely successor on the throne of Sardinia.

He was educated in the intellectually liberal and Francophile atmosphere of Geneva, then in Paris during the First French Empire
First French Empire
The First French Empire , also known as the Greater French Empire or Napoleonic Empire, was the empire of Napoleon I of France...
. Napoleon I of France
Napoleon I of France
Napoleon Bonaparte was a French military and political leader during the latter stages of the French Revolution.As Napoleon I, he was Emperor of the French from 1804 to 1815...
named him lieutenant
Lieutenant
A lieutenant is a junior commissioned officer in many nations' armed forces. Typically, the rank of lieutenant in naval usage, while still a junior officer rank, is senior to the army rank...
of the dragoons in 1814. After the fall of Napoleon, Charles Albert returned to Turin. Two mentors were entrusted with countering the dangerous ideas about national liberation Charles had learned in France. However, he continued to display some sympathies with liberals.

In 1821, as regent
Regent
A regent, from the Latin regens "one who reigns", is a person selected to act as head of state because the ruler is a minor, not present, or debilitated. Currently there are only two ruling Regencies in the world, sovereign Liechtenstein and the Malaysian constitutive state of Terengganu...
for the kingdom in the absence of the new king, Charles Felix (then in Modena
Modena
Modena is a city and comune on the south side of the Po Valley, in the Province of Modena in the Emilia-Romagna region of Italy....
), he conceded a constitution that was disavowed by the king, who sent him to join the French army in Spain to suppress the liberal revolution there and restore Ferdinand VII. He distinguished himself at the Battle of Trocadero
Battle of Trocadero
The Battle of Trocadero, fought on 31 August 1823, was the only significant battle in the French invasion of Spain when French forces defeated the Spanish liberal forces and restored the absolute rule of King Ferdinand VII.-Prelude:...
in 1823, which annihilated hopes of a constitutional monarchy
Constitutional monarchy
Constitutional monarchy is a form of government in which a monarch acts as head of state within the parameters of a constitution, whether it be a written, uncodified or blended constitution...
for Spain and also gained him the favour of Austria.

Charles Albert succeeded Charles Felix to the throne of Sardinia in 1831. Although an Italian patriot allegedly opposed to the Austrian hegemony
Hegemony
Hegemony is an indirect form of imperial dominance in which the hegemon rules sub-ordinate states by the implied means of power rather than direct military force. In Ancient Greece , hegemony denoted the politico–military dominance of a city-state over other city-states...
in Northern Italy, he put down the Mazzini
Giuseppe Mazzini
Giuseppe Mazzini , nicknamed Soul of Italy, was an Italian politician, journalist and activist for the unification of Italy. His efforts helped bring about the independent and unified Italy in place of the several separate states, many dominated by foreign powers, that existed until the 19th century...
conspiracy. He introduced a series of reforms that abolished domestic customs barriers within the kingdom, promulgated a constitutional law code (Statuto Albertino
Statuto Albertino
The Statuto Albertino or Albertine Statute was the constitution that King Charles Albert conceded to the Kingdom of Piedmont-Sardinia in Italy on 4 March 1848...
) inspired to those of France and Belgium, and supported the arts and sciences.

During the Revolutions of 1848
Revolutions of 1848
The European Revolutions of 1848, known in some countries as the Spring of Nations, Springtime of the Peoples or the Year of Revolution, were a series of political upheavals throughout Europe in 1848. It was the first Europe-wide collapse of traditional authority, but within a year reactionary...
he agreed to a constitutional regime that remained in place for the century that the Kingdom of Italy
History of Italy
Italy, united in 1861, has significantly contributed to the political, cultural and social development of the entire Mediterranean region. Many cultures and civilizations have existed there since prehistoric times....
lasted. The same year he declared war
First Italian War of Independence
The First Italian War of Independence was fought in 1848 between the Kingdom of Sardinia and the Austrian Empire. The war saw main battles at Custoza and Novara in which the Austrians under Radetzky managed to defeat the Piedmontese....
on Austria, with the small army supported by volunteers from the whole of Italy. However, after his initial victories lost him the support of the Pope and the other Italian monarchs, he was defeated at Battle of Custoza
Battle of Custoza (1848)
The Battle of Custoza was fought on July 24 and 25 1848 during the first Italian War of Independence between the armies of the Austrian Empire, led by Field Marshal Radetzky, and of the Kingdom of Sardinia, led by King Charles Albert of Piedmont....
(24 July 1848), being forced to sign an armistice at Vigevano on 9 August. When, pushed by the increasing influence of the Republicans in Piedmont, he attempted to resume the war the next year, the Piedmontese were again crushed by Radetzky's troops at Novara
Battle of Novara (1849)
The Battle of Novara or Battle of Bicocca was one of the battles fought between the Austrian Empire and the Kingdom of Sardinia during the First Italian War of Independence, within the era of Italian unification...
. Rather than redrawing the Statute, he abdicated in favour of his son, Victor Emmanuel
Victor Emmanuel II of Italy
Victor Emanuel II was king of Sardinia from 1849 and, on 17 March 1861, he assumed the title King of Italy to become the first king of a united Italy since the 6th century, a title he held until his death in 1878...
fleeing in exile to Portugal.

He died at Porto
Porto
Porto , also known as Oporto in English, is the second largest city in Portugal and one of the major urban areas in the Iberian Peninsula. Its administrative limits include a population of 237,559 inhabitants distributed within 15 civil parishes...
the same year. His remains were transferred to the Basilica of Superga
Basilica of Superga
The Basilica of Superga is a church in the vicinity of Turin.It was built from 1717 to 1731 for Victor Amadeus II of Savoy by Filippo Juvarra, at the top of the hill of Superga, to fulfill a vow the duke had made during the Battle of Turin...
.

Among the indigenous princes, the number one enemy of Italian
Italy
Italy , officially the Italian Republic languages]] under the European Charter for Regional or Minority Languages. In each of these, Italy's official name is as follows:;;;;;;;;), is a unitary parliamentary republic in South-Central Europe. To the north it borders France, Switzerland, Austria and...
freedom was and is Charles Albert. The Italians should bear in mind and repeat every hour the old saying: "God watch over my friends, so that I can watch over my enemies." From Ferdinand
Ferdinand II of the Two Sicilies
Ferdinand II was King of the Two Sicilies from 1830 until his death.-Family:Ferdinand was born in Palermo, the son of King Francis I of the Two Sicilies and his wife and first cousin Maria Isabella of Spain.His paternal grandparents were King Ferdinand I of the Two Sicilies and Queen Marie...
of the House of Bourbon
House of Bourbon
The House of Bourbon is a European royal house, a branch of the Capetian dynasty . Bourbon kings first ruled Navarre and France in the 16th century. By the 18th century, members of the Bourbon dynasty also held thrones in Spain, Naples, Sicily, and Parma...
, there is nothing to fear; he has for a long time been discredited. Charles Albert on the other hand calls himself pompously the "liberator of Italy" while on the very people he is supposed to be liberating he imposes as a condition the yoke
Yoke
A yoke is a wooden beam, normally used between a pair of oxen or other animals to enable them to pull together on a load when working in pairs, as oxen usually do; some yokes are fitted to individual animals. There are several types of yoke, used in different cultures, and for different types of oxen...
of his rule (Neue Rheinische Zeitung
Neue Rheinische Zeitung
The Neue Rheinische Zeitung - Organ der Demokratie was a German daily newspaper, published by Karl Marx in Cologne between June 1, 1848 and May 19, 1849. Its name refers to a paper earlier edited by Marx, the Rheinische Zeitung...
No. 73, 12 August 1848).