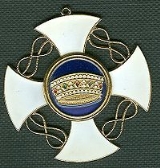 Order of the Crown of Italy
Topic Home
Discussion
0

Encyclopedia
The Order of the Crown of Italy was founded as a national order in 1868 by King Vittorio Emanuele II
Victor Emmanuel II of Italy
Victor Emanuel II was king of Sardinia from 1849 and, on 17 March 1861, he assumed the title King of Italy to become the first king of a united Italy since the 6th century, a title he held until his death in 1878...
, to commemorate the unification of Italy
Italian unification
Italian unification was the political and social movement that agglomerated different states of the Italian peninsula into the single state of Italy in the 19th century...
in 1861. It was awarded in five degrees for civilian and military merit.

The order has been suppressed by law since the foundation of the Republic
Birth of the Italian Republic
The Italian constitutional referendum which officially took place on 2 June 1946, is a key event of Italian contemporary history. Until 1946, Italy was a kingdom ruled by the House of Savoy, kings of Italy since the Risorgimento and previously rulers of Savoy...
in 1946. However, Umberto II
Umberto II of Italy
Umberto II, occasionally anglicized as Humbert II was the last King of Italy for slightly over a month, from 9 May 1946 to 12 June 1946. He was nicknamed the King of May -Biography:...
did not abdicate his position as fons honorum and it remained under his Grand Mastership as a dynastic order. While the continued use of those decorations conferred prior to 1951 is permitted in Italy, the crowns on the ribbons issued before 1946 must be substituted for as many five pointed stars on military uniforms.


Order of Merit of Savoy

Following the demise of the last reigning monarch in 1983, the order, founded by the first, is no longer bestowed. It was replaced by the Order of Merit of Savoy instituted by his heir, the current head of the former Royal House
House of Savoy
The House of Savoy was formed in the early 11th century in the historical Savoy region. Through gradual expansion, it grew from ruling a small county in that region to eventually rule the Kingdom of Italy from 1861 until the end of World War II, king of Croatia and King of Armenia...
, in 1988. While the Ordine al merito d'Savoia has never been a national order, it is subsidiary to the Civil Order of Savoy
Civil Order of Savoy
The Civil Order of Savoy was founded as an order of knighthood in 1831 by the King of Sardinia, Charles Albert, Duke of Savoy. The intention was to reward those virtues not belonging to the existing Military Order of Savoy, founded by Vittorio Emanuele I in 1815. The order has one degree, that of...
which was. The Order of Merit has around 2,000 members and, as with the Order of the Crown of Italy previously, it is entrusted to the Chancellor of the Order of Saints Maurice and Lazarus.

The various degrees of the order, with corresponding ribbons, were as follows: