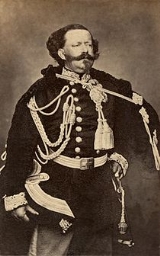 Overview
Victor Emanuel II was king of Sardinia
Kingdom of Sardinia
The Kingdom of Sardinia consisted of the island of Sardinia first as a part of the Crown of Aragon and subsequently the Spanish Empire , and second as a part of the composite state of the House of Savoy . Its capital was originally Cagliari, in the south of the island, and later Turin, on the...
from 1849 and, on 17 March 1861, he assumed the title King of Italy
King of Italy
King of Italy is a title adopted by many rulers of the Italian peninsula after the fall of the Roman Empire...
to become the first king of a united Italy
Italian unification
Italian unification was the political and social movement that agglomerated different states of the Italian peninsula into the single state of Italy in the 19th century...
since the 6th century, a title he held until his death in 1878. The Italians gave him the epithet Father of the Fatherland .
Victor Emanuel was born the eldest son of Charles Albert of Sardinia
Charles Albert of Sardinia
Charles Albert was the King of Piedmont-Sardinia from 1831 to 1849. He succeeded his distant cousin Charles Felix, and his name is bound with the first Italian statute and the First War of Independence...
and Maria Theresa of Austria. His father was King of Sardinia. He lived for some years of his youth in Florence
Florence
Florence is the capital city of the Italian region of Tuscany and of the province of Florence. It is the most populous city in Tuscany, with approximately 370,000 inhabitants, expanding to over 1.5 million in the metropolitan area....
and showed an early interest in politics, the military, and sports.