Encyclopedia
An imam is an Islam
Islam
Islam . The most common are and .   : Arabic pronunciation varies regionally. The first vowel ranges from ~~. The second vowel ranges from ~~~...
ic leadership position, often the worship leader of a mosque
Mosque
A mosque is a place of worship for followers of Islam. The word is likely to have entered the English language through French , from Portuguese , from Spanish , and from Berber , ultimately originating in — . The Arabic word masjid literally means a place of prostration...
and the Muslim
Muslim
A Muslim, also spelled Moslem, is an adherent of Islam, a monotheistic, Abrahamic religion based on the Quran, which Muslims consider the verbatim word of God as revealed to prophet Muhammad. "Muslim" is the Arabic term for "submitter" .Muslims believe that God is one and incomparable...
community. Similar to spiritual leaders, the imam is the one who leads Islamic worship services. More often, the community turns to the mosque imam if they have a religious question. In smaller communities, an imam could also be the community leader.

The Sunni
Sunni Islam
Sunni Islam is the largest branch of Islam. Sunni Muslims are referred to in Arabic as ʾAhl ūs-Sunnah wa āl-Ǧamāʿah or ʾAhl ūs-Sunnah for short; in English, they are known as Sunni Muslims, Sunnis or Sunnites....
branch of Islam, whereto approximately 90% of Muslims adhere, does not have a clergy and therefore an imam is not a cleric
Clergy
Clergy is the generic term used to describe the formal religious leadership within a given religion. A clergyman, churchman or cleric is a member of the clergy, especially one who is a priest, preacher, pastor, or other religious professional....
like that of a Catholic Christian
Christian
A Christian is a person who adheres to Christianity, an Abrahamic, monotheistic religion based on the life and teachings of Jesus of Nazareth as recorded in the Canonical gospels and the letters of the New Testament...
priest
Priest
A priest is a person authorized to perform the sacred rites of a religion, especially as a mediatory agent between humans and deities. They also have the authority or power to administer religious rites; in particular, rites of sacrifice to, and propitiation of, a deity or deities...
. In the Shi'a branch of Islam, the concept of an imam occupies a much more central religious position. 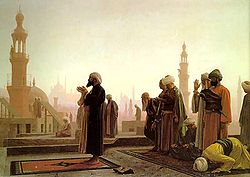 The Sunni branch of Islam does not have imams in the same sense as the Shi'a. In every day terms, the imam for Sunni Muslims is the one who leads congregational Islamic worship and prayers, and the Friday sermon is most often given by an appointed imam.

The term is also used:

for a recognized religious scholar or authority in Islam, often for the founding scholars of the four Sunni madhhab
Madhhab
is a Muslim school of law or fiqh . In the first 150 years of Islam, there were many such "schools". In fact, several of the Sahābah, or contemporary "companions" of Muhammad, are credited with founding their own...
s, or schools of jurisprudence (fiqh)
Fiqh
Fiqh is Islamic jurisprudence. Fiqh is an expansion of the code of conduct expounded in the Quran, often supplemented by tradition and implemented by the rulings and interpretations of Islamic jurists....
. It may also refer to the Muslim scholars who created the analytical sciences related to Hadith
Hadith
The term Hadīth is used to denote a saying or an act or tacit approval or criticism ascribed either validly or invalidly to the Islamic prophet Muhammad....
or it may refer to the heads of the Prophet Muhammad
Muhammad
Muhammad |ligature]] at U+FDF4 ;Arabic pronunciation varies regionally; the first vowel ranges from ~~; the second and the last vowel: ~~~. There are dialects which have no stress. In Egypt, it is pronounced not in religious contexts...
's family in their generational times.

Those who are considered imams in the context of scholarly authority by Sunni Muslims.

In the Shi'a context, imam has a meaning more central to belief, referring to leaders of the community. Twelver and Ismaili
Ismaili
' is a branch of Shia Islam. It is the second largest branch of Shia Islam, after the Twelvers...
Shi'a believe that these imams are chosen by God to be perfect examples for the faithful and to lead all humanity in all aspects of life. They also believe that all the imams chosen are free from committing any sin, infallibility which is called ismah
Ismah
‘Iṣmah or ‘Isma is the concept of infallibility or "divinely bestowed freedom from error and sin" in Islam. Muslims believe that Muhammad and other prophets in Islam possessed ‘iṣmah. Twelver and Ismaili Shia Muslims also attribute the quality to Imāms and Fatima Zahra, daughter of Muhammad...
. These leaders must be followed since they are appointed by God.


Fatimah
Fatimah
Fatimah was a daughter of the Islamic prophet Muhammad from his first wife Khadijah bint Khuwaylid. She is regarded by Muslims as an exemplar for men and women. She remained at her father's side through the difficulties suffered by him at the hands of the Quraysh of Mecca...
, also Fatimah al-Zahraa, daughter of Muhammed (615–632), is also considered infallible but not an imam. Many Shi'a believe that the last imam will one day return.


Zaidi imams as rulers of Yemen