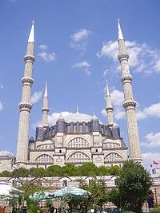 Overview
A mosque is a place of worship
Place of worship
A place of worship or house of worship is an establishment or her location where a group of people comes to perform acts of religious study, honor, or devotion. The form and function of religious architecture has evolved over thousands of years for both changing beliefs and architectural style...
for followers of Islam
Islam
Islam . The most common are and .   : Arabic pronunciation varies regionally. The first vowel ranges from ~~. The second vowel ranges from ~~~...
. The word is likely to have entered the English language
English language
English is a West Germanic language that arose in the Anglo-Saxon kingdoms of England and spread into what was to become south-east Scotland under the influence of the Anglian medieval kingdom of Northumbria...
through French
French language
French is a Romance language spoken as a first language in France, the Romandy region in Switzerland, Wallonia and Brussels in Belgium, Monaco, the regions of Quebec and Acadia in Canada, and by various communities elsewhere. Second-language speakers of French are distributed throughout many parts...
(mosquée), from Portuguese
Portuguese language
Portuguese is a Romance language that arose in the medieval Kingdom of Galicia, nowadays Galicia and Northern Portugal. The southern part of the Kingdom of Galicia became independent as the County of Portugal in 1095...
(mesquita), from Spanish
Spanish language
Spanish , also known as Castilian , is a Romance language in the Ibero-Romance group that evolved from several languages and dialects in central-northern Iberia around the 9th century and gradually spread with the expansion of the Kingdom of Castile into central and southern Iberia during the...
(mezquita), and from Berber (tamezgida), ultimately originating in — ˈmæsdʒɪd. The Arabic word masjid literally means a place of prostration
Prostration
Prostration is the placement of the body in a reverentially or submissively prone position. Major world religions employ prostration either as a means of embodying reverence for a noble person, persons or doctrine, or as an act of submissiveness to a supreme being or beings...
. The word "mosque" in English refers to all types of buildings dedicated for Islamic worship, although there is a distinction in Arabic between the smaller masjid dedicated for the daily five prayers and the larger masjid jāmi (مسجد جامع) where the daily five prayers and the Friday congregation sermons are held with a high volume of attendance.

There exist strict and detailed requirements in Sunni fiqh
Fiqh
Fiqh is Islamic jurisprudence. Fiqh is an expansion of the code of conduct expounded in the Quran, often supplemented by tradition and implemented by the rulings and interpretations of Islamic jurists....
for a place of worship to be considered a masjid, with places that do not meet these requirements regarded as musallas There are stringent restrictions on the uses of the area formally demarcated as the masjid (which is often a small portion of the larger complex), and, in the Sharia
Sharia
Sharia law, is the moral code and religious law of Islam. Sharia is derived from two primary sources of Islamic law: the precepts set forth in the Quran, and the example set by the Islamic prophet Muhammad in the Sunnah. Fiqh jurisprudence interprets and extends the application of sharia to...
, once an area is formally designated as a masjid, it remains so until the Last Day.

The mosque serves as a place where Muslims can come together for salat
Salat
Salah is the practice of formal prayer in Islam. Its importance for Muslims is indicated by its status as one of the Five Pillars of Sunni Islam, of the Ten Practices of the Religion of Twelver Islam and of the 7 pillars of Musta'lī Ismailis...
(prayer) as well as a center for information, education, and dispute settlement.