Encyclopedia
Al-Mansur, Almanzor or Abu Ja'far Abdallah ibn Muhammad al-Mansur (95 AH – 158 AH (714 AD – 775 AD); ) was the second Abbasid
Abbasid
The Abbasid Caliphate or, more simply, the Abbasids , was the third of the Islamic caliphates. It was ruled by the Abbasid dynasty of caliphs, who built their capital in Baghdad after overthrowing the Umayyad caliphate from all but the al-Andalus region....
Caliph
Caliph
The Caliph is the head of state in a Caliphate, and the title for the ruler of the Islamic Ummah, an Islamic community ruled by the Shari'ah. It is a transcribed version of the Arabic word   which means "successor" or "representative"...
from 136 AH to 158 AH (754 AD – 775 AD).

Al-Mansur was born at the home of the 'Abbasid family after their emigration from the Hejaz in 95 AH (714 AD). "His father, Muhammad, was reputedly a great-grandson of Abbas ibn Abd al-Muttalib, the youngest uncle of Mohammad; his mother, as described by 14th century moorish historian Ali Ibn-Abd Allah's Roudh el Kartas was a "Negro woman given to his father." He reigned from Dhu al-Hijjah 136 AH until Dhu al-Hijjah 158 AH (754 AD – 775 AD). In 762 he founded as new imperial residence and palace city Madinat as-Salam(the city of peace), which became the core of the Imperial capital Baghdad
Baghdad
Baghdad is the capital of Iraq, as well as the coterminous Baghdad Governorate. The population of Baghdad in 2011 is approximately 7,216,040...
.

Al-Mansur was concerned with the solidity of his regime after the death of his brother, Abu'l `Abbas, who later become known as-Saffah
As-Saffah
Abu al-`Abbās `Abdu'llāh ibn Muhammad as-Saffāh, or Abul `Abbas al-Saffah , was the first Abbasid caliph .As-Saffah was the head of one branch of the Banu Hashim, who traced their lineage to Hashim, a great-grandfather of...
(the blood spreader = bloody). In 755 he arranged the assassination of Abu Muslim
Abu Muslim
- External links :* *...
. Abu Muslim was a loyal freed man from the eastern Iranian province of Khorasan
Greater Khorasan
Greater Khorasan or Ancient Khorasan is a historical region of Greater Iran mentioned in sources from Sassanid and Islamic eras which "frequently" had a denotation wider than current three provinces of Khorasan in Iran...
who had led the Abbasid forces to victory over the Umayyad
Umayyad
The Umayyad Caliphate was the second of the four major Arab caliphates established after the death of Muhammad. It was ruled by the Umayyad dynasty, whose name derives from Umayya ibn Abd Shams, the great-grandfather of the first Umayyad caliph. Although the Umayyad family originally came from the...
s during the Third Islamic Civil War
Islamic Civil War
Islamic Civil War/Fitna may refer to:* First Islamic Civil War * Second Islamic Civil War * Third Islamic Civil War/Abassid Revolt...
in 749-750. At the time of al-Mansur he was the subordinate, but undisputed ruler of Iran and Transoxiana. The assassination seems to have been made to preclude a power struggle in the empire. Though some findings suggest the Abu Muslim became incredulous and paranoid, thus assassination was necessary and arranged.

He deposed Isa bin Musa bin Muhammad bin Ali as his successor due to suspect of corruption and in his place appointed al-Mahdi as his successor and took public allegiance for him.
Like his elder brother Saffah he wanted to unite the land so he get rid of all of his opposition.

During his reign, literature
Islamic literature
Islamic literature is literature written with an Islamic perspective, in any language.The most well known fiction from the Islamic world was The Book of One Thousand and One Nights , which was a compilation of many earlier folk tales told by the Persian Queen Scheherazade...
and scholarly work in the Islamic world began to emerge in full force, supported by new Abbasid tolerances for Persians
Persian people
The Persian people are part of the Iranian peoples who speak the modern Persian language and closely akin Iranian dialects and languages. The origin of the ethnic Iranian/Persian peoples are traced to the Ancient Iranian peoples, who were part of the ancient Indo-Iranians and themselves part of...
and other groups suppressed by the Umayyads. Although the Umayyad caliph Hisham ibn Abd al-Malik
Hisham ibn Abd al-Malik
Hisham ibn Abd al-Malik 10th Umayyad caliph who ruled from 723 until his death in 743. When he was born in 691 his mother named him after her father....
had adopted Persian court practices, it was not until al-Mansur's reign that Persian literature and scholarship were truly appreciated in the Islamic world. The emergence of Shu'ubiya among Persian scholars occurred during the reign of al-Mansur as a result of loosened censorship over Persian nationalism. Shu'ubiya was a literary movement among Persians expressing their belief that Persian art and culture was superior to that of the Arabs; the movement served to catalyze the emergence of Arab-Persian dialogues in the eighth century.

Perhaps more importantly than the emergence of Persian scholarship was the conversion of many non-Arabs to Islam. The Umayyads actively tried to discourage conversion in order to continue the collection of the jizya
Jizya
Under Islamic law, jizya or jizyah is a per capita tax levied on a section of an Islamic state's non-Muslim citizens, who meet certain criteria...
, or the tax on non-Muslims. The inclusiveness of the Abbasid regime, and that of al-Mansur, saw the expansion of Islam among its territory; in 750, roughly 8% of residents in the Caliphate were Muslims. This would double to 15% by the end of al-Mansur's reign.

Al-Mansur died in 775 on his way to Mecca
Mecca
Mecca is a city in the Hijaz and the capital of Makkah province in Saudi Arabia. The city is located inland from Jeddah in a narrow valley at a height of above sea level...
to make hajj
Hajj
The Hajj is the pilgrimage to Mecca, Saudi Arabia. It is one of the largest pilgrimages in the world, and is the fifth pillar of Islam, a religious duty that must be carried out at least once in their lifetime by every able-bodied Muslim who can afford to do so...
. He was buried somewhere along the way in one of the hundreds of graves that had been dug in order to hide his body from the Umayyads. He was succeeded by his son, al-Mahdi
Al-Mahdi
Muhammad ibn Mansur al-Mahdi , was the third Abbasid Caliph who reigned from 158 AH to 169 AH . He succeeded his father, al-Mansur....
.

According to a number of sources, the Imam Abu Hanifa an-Nu'man was imprisoned by al-Mansur. Imam Malik ibn Anas
Malik ibn Anas
Mālik ibn Anas ibn Mālik ibn Abī 'Āmir al-Asbahī is known as "Imam Malik," the "Sheikh of Islam", the "Proof of the Community," and "Imam of the Abode of Emigration." He was one of the most highly respected scholars of fiqh in Sunni Islam...
, the founder of another school of law, was also flogged during his rule, but al-Mansur himself did not condone this - in fact, it was his cousin, who was the governor of Madinah at the time, who did so. Al-Mansur, in turn, punished his cousin, and retributed Imam Malik. (Ya'qubi, vol.III, p. 86; Muruj al-dhahab, vol.III, p. 268-270.) 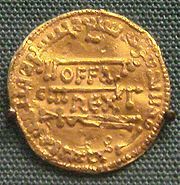 Al-Masudi
Al-Masudi
Abu al-Hasan Ali ibn al-Husayn ibn Ali al-Mas'udi , was an Arab historian and geographer, known as the "Herodotus of the Arabs." Al-Masudi was one of the first to combine history and scientific geography in a large-scale work, Muruj adh-dhahab...
in Meadows of Gold recounts a number of anecdotes that present aspects of this caliph's character. He tells of a blind poet on two occasions reciting praise poems for the Umayyads to one he didn't realize was this Abbasid caliph. Al-Mansur rewarded the poet for the verses. Al-Masudi relates a tale of the arrow with verses inscribed on feathers and shaft arriving close to al-Mansur. These verses prompted him to investigate the situation of a notable from Hamadan unjustly imprisoned and release him. There is also the account of the foreboding verses al-Mansur saw written on the wall just before his death.

A very impressive aspect of this caliph's character is that when he died he left in the treasury six hundred thousand dirhams and fourteen million dinars.

In 2008, MBC 1
MBC 1
MBC is a free-to-air, pan-Arab general television channel.Satellite transmission started from London in September 1991, making MBC the first independent Arabic satellite TV station, with an estimated audience of more than 130 million Arabic-speaking people around the world.MBC has recently moved...
had depicted the life and leadership of Al-Mansur in a historical series aired during the holy month of Ramadan
Ramadan
Ramadan is the ninth month of the Islamic calendar, which lasts 29 or 30 days. It is the Islamic month of fasting, in which participating Muslims refrain from eating, drinking, smoking and sex during daylight hours and is intended to teach Muslims about patience, spirituality, humility and...
.
The source of this article is wikipedia, the free encyclopedia.  The text of this article is licensed under the GFDL.