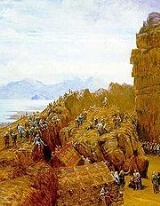 Encyclopedia
The Icelandic Commonwealth, Icelandic Free State, or Republic of Iceland was the state existing in Iceland
Iceland
Iceland , described as the Republic of Iceland, is a Nordic and European island country in the North Atlantic Ocean, on the Mid-Atlantic Ridge. Iceland also refers to the main island of the country, which contains almost all the population and almost all the land area. The country has a population...
between the establishment of the Althing
Althing
The Alþingi, anglicised variously as Althing or Althingi, is the national parliament of Iceland. The Althingi is the oldest parliamentary institution in the world still extant...
in 930 and the pledge of fealty
Fealty
An oath of fealty, from the Latin fidelitas , is a pledge of allegiance of one person to another. Typically the oath is made upon a religious object such as a Bible or saint's relic, often contained within an altar, thus binding the oath-taker before God.In medieval Europe, fealty was sworn between...
to the Norwegian king in 1262. It was initially established by a public consisting largely of recent immigrants from Norway
Norway
Norway , officially the Kingdom of Norway, is a Nordic unitary constitutional monarchy whose territory comprises the western portion of the Scandinavian Peninsula, Jan Mayen, and the Arctic archipelago of Svalbard and Bouvet Island. Norway has a total area of and a population of about 4.9 million...
who had fled the unification of that country under King Harald Fairhair.

The medieval Icelandic state had an unusual structure. At the national level, the Althing
Althing
The Alþingi, anglicised variously as Althing or Althingi, is the national parliament of Iceland. The Althingi is the oldest parliamentary institution in the world still extant...
was both court and legislature; there was no king or other central executive power. Iceland was divided into numerous goðorð (plural same as singular), which were essentially clans or alliances run by chieftains called goðar (singular goði). The chieftains provided for defense and appointed judges to resolve disputes between goðorð members. The goðorð were not strictly geographical districts. Instead, membership in a goðorð was an individual's decision, and one could, at least theoretically, change goðorð at will. However, no group of lesser men could elect or declare someone a goði. The position was the property of the goði; and could be bought, sold, borrowed, and inherited.

If a person wanted to appeal a decision made by his goðorð court or if a dispute arose between members of different goðorð, the case would be referred to a system of higher-level courts, leading up to the four regional courts which made up the Althing, which consisted of the goðar of the Four Quarters
Quarter (country subdivision)
A quarter is a section of an urban settlement.Its borders can be administratively chosen , and it may have its own administrative structure...
of Iceland. The Althing eventually created a national "fifth court", as the highest court of all, and more goðar to be its members.

The Althing was only moderately successful at stopping feuds; Magnus Magnusson calls it "an uneasy substitute for vengeance". Nevertheless, it could act very sweepingly. At the Conversion of Iceland in 1000, the Althing decreed in order to prevent an invasion, that all Icelanders must be baptized, and forbade the public celebration of pagan rituals. Private celebration was forbidden a few years later.


Life within the system

The actual operation of this system is a common subject matter in some of the Icelandic sagas
Norse saga
The sagas are stories about ancient Scandinavian and Germanic history, about early Viking voyages, the battles that took place during the voyages, about migration to Iceland and of feuds between Icelandic families...
. Works like Njál’s Saga and the Laxdæla Saga give many details, but their accuracy has been disputed. These and other sagas are available in modern English translations. Njál’s Saga includes the Christianisation of Iceland within the framework of the story.

The followers of the goðar owed them military service. They were organized into platoons or companies based on their social status and equipment, which formed expeditionary armies or leiðangrs. Icelandic military tradition of the time followed closely developments in Norway. No organized cavalry formations or formations of troops equipped with projectile weapons are recorded: instead the bulk of the forces were formed in units of light, medium and heavy infantry
Infantry
Infantrymen are soldiers who are specifically trained for the role of fighting on foot to engage the enemy face to face and have historically borne the brunt of the casualties of combat in wars. As the oldest branch of combat arms, they are the backbone of armies...
, with bowmen or slingers
Sling (weapon)
A sling is a projectile weapon typically used to throw a blunt projectile such as a stone or lead "sling-bullet". It is also known as the shepherd's sling....
distributed among the infantry units operating as light support skirmishers.

Before the end of the Commonwealth at least 21 fortresses and castles had been built in Iceland.

In the early 13th century, the Sturlung era, the Commonwealth began to suffer from serious internal strife. The King of Norway began to exert pressure on his Icelandic vassal
Vassal
A vassal or feudatory is a person who has entered into a mutual obligation to a lord or monarch in the context of the feudal system in medieval Europe. The obligations often included military support and mutual protection, in exchange for certain privileges, usually including the grant of land held...
s that they bring the country under his rule. A combination of discontent with domestic hostilities and pressure from the King of Norway
Norway
Norway , officially the Kingdom of Norway, is a Nordic unitary constitutional monarchy whose territory comprises the western portion of the Scandinavian Peninsula, Jan Mayen, and the Arctic archipelago of Svalbard and Bouvet Island. Norway has a total area of and a population of about 4.9 million...
led the Icelandic chieftains to accept Norway's Haakon IV as king by the signing of the Gamli sáttmáli ("Old Covenant") in 1262. This effectively brought the Commonwealth to an end.

Anarchist
Anarchism
Anarchism is generally defined as the political philosophy which holds the state to be undesirable, unnecessary, and harmful, or alternatively as opposing authority in the conduct of human relations...
historians and philosophers have looked to the Icelandic Commonwealth with interest since the 19th century. The Russian anarchist Peter Kropotkin
Peter Kropotkin
Prince Pyotr Alexeyevich Kropotkin was a Russian zoologist, evolutionary theorist, philosopher, economist, geographer, author and one of the world's foremost anarcho-communists. Kropotkin advocated a communist society free from central government and based on voluntary associations between...
first noted in his book Mutual Aid
Mutual aid
Mutual aid may refer to:*Mutual aid , a tenet of organization theories.*Mutual aid , an agreement between emergency responders.*Mutual Aid: A Factor of Evolution, a biology book by anarchist Peter Kropotkin...
that Norse society
Norsemen
Norsemen is used to refer to the group of people as a whole who spoke what is now called the Old Norse language belonging to the North Germanic branch of Indo-European languages, especially Norwegian, Icelandic, Faroese, Swedish and Danish in their earlier forms.The meaning of Norseman was "people...
, from which the settlers in Iceland came, had various "mutual aid" institutions, including communal land ownership (based around what he called "the village community") and a form of social self-administration, the "Thing" -- both local and Iceland-wide -- which can be considered a "primitive" form of the anarchist communal assembly. Anarchist geographer Elisée Reclus
Élisée Reclus
Élisée Reclus , also known as Jacques Élisée Reclus, was a renowned French geographer, writer and anarchist. He produced his 19-volume masterwork La Nouvelle Géographie universelle, la terre et les hommes , over a period of nearly 20 years...
also noted that in Iceland they "succeeded completely in maintaining their dignity as free man, without kings, feudal principles, hierarchy or any military establishment." They governed themselves through a process in which "the common interest was discussed in the open air by all inhabitants, who were dressed in armor, the symbol of the absolute right of personal self-defense belonging to each individual."

More recently, some anarcho-capitalists
Anarcho-capitalism
Anarcho-capitalism is a libertarian and individualist anarchist political philosophy that advocates the elimination of the state in favour of individual sovereignty in a free market...
have claimed it to be a possible model anarcho-capitalist society, where police and justice were guaranteed through a free market
Free market
A free market is a competitive market where prices are determined by supply and demand. However, the term is also commonly used for markets in which economic intervention and regulation by the state is limited to tax collection, and enforcement of private ownership and contracts...
. Author Jared Diamond
Jared Diamond
Jared Mason Diamond is an American scientist and author whose work draws from a variety of fields. He is currently Professor of Geography and Physiology at UCLA...
has written


Medieval Iceland had no bureaucrats, no taxes, no police, and no army. … Of the normal functions of governments elsewhere, some did not exist in Iceland, and others were privatized, including fire-fighting, criminal prosecutions and executions, and care of the poor.


Medieval Icelandic institutions have several peculiar and interesting characteristics; they might almost have been invented by a mad economist to test the lengths to which market systems could supplant government in its most fundamental functions. Killing was a civil offense resulting in a fine paid to the survivors of the victim. Laws were made by a "parliament," seats in which were a marketable commodity. Enforcement of law was entirely a private affair. And yet these extraordinary institutions survived for over three hundred years, and the society in which they survived appears to have been in many ways an attractive one. Its citizens were, by medieval standards, free; differences in status based on rank or sex were relatively small; and its literary, output in relation to its size has been compared, with some justice, to that of Athens.

This "Thing system" survived for several centuries. It was eventually destroyed by the Christian church, which bought up all the godards (defense agencies) creating a state monopoly. For market anarchist scholar Roderick Long
Roderick Long
Roderick Tracy Long is a professor of philosophy at Auburn University and libertarian anarchist blogger. He also serves as a senior scholar for the Ludwig von Mises Institute, an editor of the Journal of Ayn Rand Studies, director and president of the Molinari Institute, and an advisory panel...
, this illustrates a flaw in the thing system which differentiates it from pure anarcho-capitalism - new "startup" mutual defense units were not allowed.

The social anarchist authors of An Anarchist FAQ
An Anarchist FAQ
"An Anarchist FAQ" is an FAQ written by an international work group of social anarchists connected through the internet. It documents anarchist theory and ideas while arguing that social anarchism is a better form of anarchism than individualist anarchism, which it critiques. It also explores other...
took issue with Friedman's portrayal of the period, arguing that the Icelandic system was pre-capitalist in nature with numerous communal institutions. Friedman accused them of misconstruing his position and not caring whether what they published was true. The authors of the FAQ admitted to making mistakes, but rejected the notion that they were uninterested in the truth, and maintained their analysis that Iceland was a communal system.