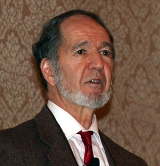 Overview
Jared Mason Diamond is an American scientist
Scientist
A scientist in a broad sense is one engaging in a systematic activity to acquire knowledge. In a more restricted sense, a scientist is an individual who uses the scientific method. The person may be an expert in one or more areas of science. This article focuses on the more restricted use of the word...
and author
Author
An author is broadly defined as "the person who originates or gives existence to anything" and that authorship determines responsibility for what is created. Narrowly defined, an author is the originator of any written work.-Legal significance:...
whose work draws from a variety of fields. He is currently Professor
Professor
A professor is a scholarly teacher; the precise meaning of the term varies by country. Literally, professor derives from Latin as a "person who professes" being usually an expert in arts or sciences; a teacher of high rank...
of Geography
Geography
Geography is the science that studies the lands, features, inhabitants, and phenomena of Earth. A literal translation would be "to describe or write about the Earth". The first person to use the word "geography" was Eratosthenes...
and Physiology
Physiology
Physiology is the science of the function of living systems. This includes how organisms, organ systems, organs, cells, and bio-molecules carry out the chemical or physical functions that exist in a living system. The highest honor awarded in physiology is the Nobel Prize in Physiology or...
at UCLA
University of California, Los Angeles
The University of California, Los Angeles is a public research university located in the Westwood neighborhood of Los Angeles, California, USA. It was founded in 1919 as the "Southern Branch" of the University of California and is the second oldest of the ten campuses...
. He is best known for the award-winning popular science
Popular science
Popular science, sometimes called literature of science, is interpretation of science intended for a general audience. While science journalism focuses on recent scientific developments, popular science is broad-ranging, often written by scientists as well as journalists, and is presented in many...
books The Third Chimpanzee
The Third Chimpanzee
The Third Chimpanzee: The Evolution and Future of the Human Animal is a wide-ranging book by Jared Diamond, professor of geography and physiology at the University of California, Los Angeles , which applies insights from biology, anthropology, and linguistics to questions such as why one species...
, Guns, Germs, and Steel
Guns, Germs, and Steel
Guns, Germs, and Steel: The Fates of Human Societies is a 1997 book by Jared Diamond, professor of geography and physiology at the University of California, Los Angeles . In 1998 it won the Pulitzer Prize for general non-fiction and the Aventis Prize for Best Science Book...
, and Collapse: How Societies Choose to Fail or Succeed.
Diamond was born in Boston
Boston
Boston is the capital of and largest city in Massachusetts, and is one of the oldest cities in the United States. The largest city in New England, Boston is regarded as the unofficial "Capital of New England" for its economic and cultural impact on the entire New England region. The city proper had...
, Massachusetts
Massachusetts
The Commonwealth of Massachusetts is a state in the New England region of the northeastern United States of America. It is bordered by Rhode Island and Connecticut to the south, New York to the west, and Vermont and New Hampshire to the north; at its east lies the Atlantic Ocean. As of the 2010...
, to a Bessarabia
Bessarabia
Bessarabia is a historical term for the geographic region in Eastern Europe bounded by the Dniester River on the east and the Prut River on the west....
n Jewish family. His father was the physician
Physician
A physician is a health care provider who practices the profession of medicine, which is concerned with promoting, maintaining or restoring human health through the study, diagnosis, and treatment of disease, injury and other physical and mental impairments...
Louis K. Diamond, and his mother the teacher
Teacher
A teacher or schoolteacher is a person who provides education for pupils and students . The role of teacher is often formal and ongoing, carried out at a school or other place of formal education. In many countries, a person who wishes to become a teacher must first obtain specified professional...
, musician
Musician
A musician is an artist who plays a musical instrument. It may or may not be the person's profession. Musicians can be classified by their roles in performing music and writing music.Also....* A person who makes music a profession....
, and linguist Flora Kaplan.

How does diamond refute the charge that Australia is proof that differences in the fates of human societies are a matter of people and not the environ...
More

Two types of choices seem to me to have been crucial in tipping their outcomes towards success or failure: long-term planning, and willingness to reconsider core values. On reflection, we can also recognize the crucial role of these same two choices for the outcomes of our individual lives.

On the fates of past societies facing problems of sustainability, Collapse: How Societies Choose to Fail or Succeed (2005), p. 522
More
x