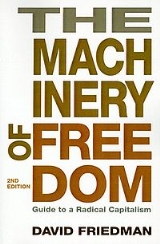 Encyclopedia
The Machinery of Freedom is a 1973 nonfiction book by libertarian
Libertarianism
Libertarianism, in the strictest sense, is the political philosophy that holds individual liberty as the basic moral principle of society. In the broadest sense, it is any political philosophy which approximates this view...
economist
Economics
Economics is the social science that analyzes the production, distribution, and consumption of goods and services. The term economics comes from the Ancient Greek from + , hence "rules of the house"...
David D. Friedman
David D. Friedman
David Director Friedman is an American economist, author, and Right-libertarian theorist. He is known as a leader in anarcho-capitalist political theory, which is the subject of his most popular book, The Machinery of Freedom...
outlining the means by which an anarcho-capitalist
Anarcho-capitalism
Anarcho-capitalism is a libertarian and individualist anarchist political philosophy that advocates the elimination of the state in favour of individual sovereignty in a free market...
society could operate. The Institute of Public Affairs
Institute of Public Affairs
The Institute of Public Affairs is a public policy think tank based in Melbourne, Australia. It advocates free market economic policies such as privatisation and deregulation of state-owned enterprises, trade liberalisation and deregulated workplaces, climate change skepticism , and the...
included it in a list of the "Top 20 books you must read before you die."

The book calls for the abolition or privatization
Privatization
Privatization is the incidence or process of transferring ownership of a business, enterprise, agency or public service from the public sector to the private sector or to private non-profit organizations...
of all government
Government
Government refers to the legislators, administrators, and arbitrators in the administrative bureaucracy who control a state at a given time, and to the system of government by which they are organized...
functions, details suggestions for many specific instances of privatization, explores the consequences of libertarian thought, examples of libertarian society (such as the Icelandic Commonwealth
Icelandic Commonwealth
The Icelandic Commonwealth, Icelandic Free State, or Republic of Iceland was the state existing in Iceland between the establishment of the Althing in 930 and the pledge of fealty to the Norwegian king in 1262...
), and offers the author's personal statement about why he became a libertarian. Topics addressed in the book include the privatization of law (both legislation
Legislation
Legislation is law which has been promulgated by a legislature or other governing body, or the process of making it...
and enforcement
Law enforcement agency
In North American English, a law enforcement agency is a government agency responsible for the enforcement of the laws.Outside North America, such organizations are called police services. In North America, some of these services are called police while others have other names In North American...
), and the knotty problem of providing for public good
Public good
In economics, a public good is a good that is non-rival and non-excludable. Non-rivalry means that consumption of the good by one individual does not reduce availability of the good for consumption by others; and non-excludability means that no one can be effectively excluded from using the good...
s (such as national defense
Defense (military)
Defense has several uses in the sphere of military application.Personal defense implies measures taken by individual soldiers in protecting themselves whether by use of protective materials such as armor, or field construction of trenches or a bunker, or by using weapons that prevent the enemy...
) in a purely libertarian society. Friedman's approach and conclusions are anarcho-capitalist
Anarcho-capitalism
Anarcho-capitalism is a libertarian and individualist anarchist political philosophy that advocates the elimination of the state in favour of individual sovereignty in a free market...
.

While some libertarians and anarcho-capitalists offer deontological
Deontological libertarianism
Deontological libertarianism refers to the view that all acts of initiation of force and fraud should be opposed because they are always immoral regardless of the effects of engaging in them...
views and argue in terms of natural rights, Friedman argues from utilitarianism
Utilitarianism
Utilitarianism is an ethical theory holding that the proper course of action is the one that maximizes the overall "happiness", by whatever means necessary. It is thus a form of consequentialism, meaning that the moral worth of an action is determined only by its resulting outcome, and that one can...
that the consequences of anarcho-capitalism will be beneficial to the vast majority, including the poor. Friedman's strategy for moving from the current status quo to anarcho-capitalism is pragmatic in spirit, advocating incremental change. For example, he favors the introduction of education vouchers as a prelude to privatization of the school system, and the decentralization of the police as a similar first step toward privatized defense.

Friedman says that anything done by government costs at least twice as much as a privately provided equivalent. He illustrated this idea with several examples, the US Post Office being an especially well-known case.