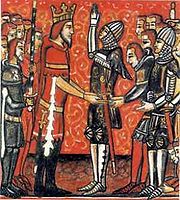 In medieval Europe
Middle Ages
The Middle Ages is a periodization of European history from the 5th century to the 15th century. The Middle Ages follows the fall of the Western Roman Empire in 476 and precedes the Early Modern Era. It is the middle period of a three-period division of Western history: Classic, Medieval and Modern...
, fealty was sworn between two people, the obliged person (vassal
Vassal
A vassal or feudatory is a person who has entered into a mutual obligation to a lord or monarch in the context of the feudal system in medieval Europe. The obligations often included military support and mutual protection, in exchange for certain privileges, usually including the grant of land held...
) and a person of rank (lord
Lord
Lord is a title with various meanings. It can denote a prince or a feudal superior . The title today is mostly used in connection with the peerage of the United Kingdom or its predecessor countries, although some users of the title do not themselves hold peerages, and use it 'by courtesy'...
). This was done as part of a formal commendation ceremony
Commendation ceremony
A commendation ceremony is a formal ceremony that evolved during the Early Medieval period to create a bond between a lord and his fighting man, called his vassal . The first recorded ceremony of commendatio was in 7th century France, but the relationship of vassalage was older, and predated even...
to create a feudal relationship.

Fealty and homage
Homage (medieval)
Homage in the Middle Ages was the ceremony in which a feudal tenant or vassal pledged reverence and submission to his feudal lord, receiving in exchange the symbolic title to his new position . It was a symbolic acknowledgment to the lord that the vassal was, literally, his man . The oath known as...
are a key element of feudalism
Feudalism
Feudalism was a set of legal and military customs in medieval Europe that flourished between the 9th and 15th centuries, which, broadly defined, was a system for ordering society around relationships derived from the holding of land in exchange for service or labour.Although derived from the...
.

The term is also used by English-speakers to refer to similar oaths of allegiance in other feudal cultures, as with medieval Japan, as well as in modern political contexts.
The source of this article is wikipedia, the free encyclopedia.  The text of this article is licensed under the GFDL.