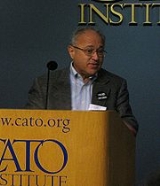 Encyclopedia
David Director Friedman (born February 12, 1945) is an American
United States
The United States of America is a federal constitutional republic comprising fifty states and a federal district...
economist
Economist
An economist is a professional in the social science discipline of economics. The individual may also study, develop, and apply theories and concepts from economics and write about economic policy...
, author
Author
An author is broadly defined as "the person who originates or gives existence to anything" and that authorship determines responsibility for what is created. Narrowly defined, an author is the originator of any written work.-Legal significance:...
, and Right-libertarian theorist. He is known as a leader in anarcho-capitalist political theory, which is the subject of his most popular book, The Machinery of Freedom
The Machinery of Freedom
The Machinery of Freedom is a 1973 nonfiction book by libertarian economist David D. Friedman outlining the means by which an anarcho-capitalist society could operate...
(1973, revised 1989). He has authored others, including Price Theory: An Intermediate Text (1986), Law's Order: What Economics Has to Do with Law and Why It Matters (2000), Hidden Order: The Economics of Everyday Life (1996), and Future Imperfect (2008).

David Friedman is the son of economists Rose
Rose Friedman
Rose Director Friedman , also known as Rose D. Friedman and Rose Director was a professor at the University of Chicago Law School. She was the wife of Milton Friedman , the winner of the 1976 Nobel Prize in Economics, and sister of Aaron Director...
and Milton Friedman
Milton Friedman
Milton Friedman was an American economist, statistician, academic, and author who taught at the University of Chicago for more than three decades...
. His son, Patri Friedman
Patri Friedman
Patri Friedman is an American activist and theorist of political economy.- Background :Friedman grew up in King of Prussia, Pennsylvania, and is a graduate of Upper Merion Area High School, class of 1994, where he went by the name Patri Forwalter-Friedman. He graduated from Harvey Mudd College in...
, has also written about anarcho-capitalism, particularly seasteading
Seasteading
Seasteading is the concept of creating permanent dwellings at sea, called seasteads, outside the territories claimed by the governments of any standing nation....
. David Friedman holds an A.B.
Bachelor of Arts
A Bachelor of Arts , from the Latin artium baccalaureus, is a bachelor's degree awarded for an undergraduate course or program in either the liberal arts, the sciences, or both...
from Harvard University
Harvard University
Harvard University is a private Ivy League university located in Cambridge, Massachusetts, United States, established in 1636 by the Massachusetts legislature. Harvard is the oldest institution of higher learning in the United States and the first corporation chartered in the country...
and a Ph.D.
Ph.D.
A Ph.D. is a Doctor of Philosophy, an academic degree.Ph.D. may also refer to:* Ph.D. , a 1980s British group*Piled Higher and Deeper, a web comic strip*PhD: Phantasy Degree, a Korean comic series* PhD Docbook renderer, an XML renderer...
in Physics
Physics
Physics is a natural science that involves the study of matter and its motion through spacetime, along with related concepts such as energy and force. More broadly, it is the general analysis of nature, conducted in order to understand how the universe behaves.Physics is one of the oldest academic...
from the University of Chicago
University of Chicago
The University of Chicago is a private research university in Chicago, Illinois, USA. It was founded by the American Baptist Education Society with a donation from oil magnate and philanthropist John D. Rockefeller and incorporated in 1890...
, although he is most known for work in other fields. He is currently a professor of law at Santa Clara University
Santa Clara University
Santa Clara University is a private, not-for-profit, Jesuit-affiliated university located in Santa Clara, California, United States. Chartered by the state of California and accredited by the Western Association of Schools and Colleges, it operates in collaboration with the Society of Jesus , whose...
, and a contributing editor for Liberty
Liberty (1987)
Liberty is a leading libertarian journal founded in 1987 by R. W. Bradford in Port Townsend, Washington, and currently edited from San Diego, California, by Stephen Cox...
magazine. He is an atheist.

In his book The Machinery of Freedom (1973), Friedman sketched a form of anarcho-capitalism
Anarcho-capitalism
Anarcho-capitalism is a libertarian and individualist anarchist political philosophy that advocates the elimination of the state in favour of individual sovereignty in a free market...
where all goods and services including law itself can be produced by the free market
Free market
A free market is a competitive market where prices are determined by supply and demand. However, the term is also commonly used for markets in which economic intervention and regulation by the state is limited to tax collection, and enforcement of private ownership and contracts...
. This differs from the version proposed by Murray Rothbard
Murray Rothbard
Murray Newton Rothbard was an American author and economist of the Austrian School who helped define capitalist libertarianism and popularized a form of free-market anarchism he termed "anarcho-capitalism." Rothbard wrote over twenty books and is considered a centrally important figure in the...
, where a legal code would first be consented to by the parties involved in setting up the anarcho-capitalist society. Friedman advocates an incrementalist approach to achieve anarcho-capitalism by gradual privatization
Privatization
Privatization is the incidence or process of transferring ownership of a business, enterprise, agency or public service from the public sector to the private sector or to private non-profit organizations...
of areas that government is involved in, ultimately privatizing law and order itself. In the book, he states his opposition to violent anarcho-capitalist revolution.

He uses a consequentialist version of anarcho-capitalism. Friedman's version of individualist anarchism
Individualist anarchism
Individualist anarchism refers to several traditions of thought within the anarchist movement that emphasize the individual and his or her will over external determinants such as groups, society, traditions, and ideological systems. Individualist anarchism is not a single philosophy but refers to a...
is not based on the assumption of inviolable natural rights but rather rests on a cost-benefit analysis
Cost-benefit analysis
Cost–benefit analysis , sometimes called benefit–cost analysis , is a systematic process for calculating and comparing benefits and costs of a project for two purposes: to determine if it is a sound investment , to see how it compares with alternate projects...
of state versus no state. It is contrasted with the natural-rights
Deontological libertarianism
Deontological libertarianism refers to the view that all acts of initiation of force and fraud should be opposed because they are always immoral regardless of the effects of engaging in them...
approach as propounded most notably by Austrian School
Austrian School
The Austrian School of economics is a heterodox school of economic thought. It advocates methodological individualism in interpreting economic developments , the theory that money is non-neutral, the theory that the capital structure of economies consists of heterogeneous goods that have...
economist, libertarian theorist and anarcho-capitalist founder Murray Rothbard
Murray Rothbard
Murray Newton Rothbard was an American author and economist of the Austrian School who helped define capitalist libertarianism and popularized a form of free-market anarchism he termed "anarcho-capitalism." Rothbard wrote over twenty books and is considered a centrally important figure in the...
.