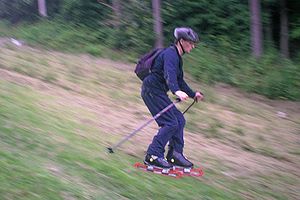 Grass skiing was started in France in 1966 as a method for training for alpine skiing
Alpine skiing
Alpine skiing is the sport of sliding down snow-covered hills on skis with fixed-heel bindings. Alpine skiing can be contrasted with skiing using free-heel bindings: Ski mountaineering and nordic skiing – such as cross-country; ski jumping; and Telemark. In competitive alpine skiing races four...
. Short skis that were actually rolling treads, much like those on tanks, or wheels
Wheel
A wheel is a device that allows heavy objects to be moved easily through rotating on an axle through its center, facilitating movement or transportation while supporting a load, or performing labor in machines. Common examples found in transport applications. A wheel, together with an axle,...
were used. These skis were attached to the skiers boots and a grassy downhill slope was found. Depending on the skill of the grass skier, high speeds and jumps could be navigated. This area of the sport has not been as popular as others.

Many skiers have created their own piste
Piste
A piste is a marked ski run or path down a mountain for snow skiing, snowboarding, or other mountain sports. The term is European, from the French for trail or track, synonymous with trail, slope, or groomed run in North America....
s as an alternative to grass ski centers or grassy mountainous regions. Moreover, aspiring alpine skiers or skiing beginners in general can try this skiing variation to learn skiing moves and techniques even before the onset of snow.

Grass skiing
Skiing
Skiing is a recreational activity using skis as equipment for traveling over snow. Skis are used in conjunction with boots that connect to the ski with use of a binding....
was invented by Richard Martin in Germany
Germany
Germany , officially the Federal Republic of Germany , is a federal parliamentary republic in Europe. The country consists of 16 states while the capital and largest city is Berlin. Germany covers an area of 357,021 km2 and has a largely temperate seasonal climate...
in 1966. It was created initially as a training method for skiers before the winter season. Two years after, Martin introduced the new skiing variation to the Vosges
Vosges
Vosges is a French department, named after the local mountain range. It contains the hometown of Joan of Arc, Domrémy.-History:The Vosges department is one of the original 83 departments of France, created on February 9, 1790 during the French Revolution. It was made of territories that had been...
region of France
France
The French Republic , The French Republic , The French Republic , (commonly known as France , is a unitary semi-presidential republic in Western Europe with several overseas territories and islands located on other continents and in the Indian, Pacific, and Atlantic oceans. Metropolitan France...
. Eventually, it has grown in popularity and became wide-known in the country.

Starting as a competitive sport, grass skiing has gained a worldwide audience and consequently, there have been ski modifications through the years. Grass skiing centers can be found in Europe
Europe
Europe is, by convention, one of the world's seven continents. Comprising the westernmost peninsula of Eurasia, Europe is generally 'divided' from Asia to its east by the watershed divides of the Ural and Caucasus Mountains, the Ural River, the Caspian and Black Seas, and the waterways connecting...
, Italy ( Forni di Sopra), Taiwan
Taiwan
Taiwan , also known, especially in the past, as Formosa , is the largest island of the same-named island group of East Asia in the western Pacific Ocean and located off the southeastern coast of mainland China. The island forms over 99% of the current territory of the Republic of China following...
, China
China
Chinese civilization may refer to:* China for more general discussion of the country.* Chinese culture* Greater China, the transnational community of ethnic Chinese.* History of China* Sinosphere, the area historically affected by Chinese culture...
, Japan
Japan
Japan is an island nation in East Asia. Located in the Pacific Ocean, it lies to the east of the Sea of Japan, China, North Korea, South Korea and Russia, stretching from the Sea of Okhotsk in the north to the East China Sea and Taiwan in the south...
, Iran
Iran
Iran , officially the Islamic Republic of Iran , is a country in Southern and Western Asia. The name "Iran" has been in use natively since the Sassanian era and came into use internationally in 1935, before which the country was known to the Western world as Persia...
, Lebanon
Lebanon
Lebanon , officially the Republic of LebanonRepublic of Lebanon is the most common term used by Lebanese government agencies. The term Lebanese Republic, a literal translation of the official Arabic and French names that is not used in today's world. Arabic is the most common language spoken among...
, Austria
Austria
Austria , officially the Republic of Austria , is a landlocked country of roughly 8.4 million people in Central Europe. It is bordered by the Czech Republic and Germany to the north, Slovakia and Hungary to the east, Slovenia and Italy to the south, and Switzerland and Liechtenstein to the...
, and Switzerland
Switzerland
Switzerland name of one of the Swiss cantons. ; ; ; or ), in its full name the Swiss Confederation , is a federal republic consisting of 26 cantons, with Bern as the seat of the federal authorities. The country is situated in Western Europe,Or Central Europe depending on the definition....
, and the Grass Skiing World Cup has already been established. There is also a place in Northern Spain, a village called Pajares, in which every last weekend of August they celebrate the annual Skiing on the Grass race, in which they have participants of all ages.

Originally, skis used in grass skiing were like rolling treads attached to the ski boots. Nowadays, there are two types of skis used in grass skiing. These are the wheeled models and the tracked ones. The wheeled model can be used in various terrain
Terrain
Terrain, or land relief, is the vertical and horizontal dimension of land surface. When relief is described underwater, the term bathymetry is used...
s and for freestyle
Freestyle skiing
Freestyle skiing is form of skiing which used to encompass two disciplines: aerials, and moguls. Except the two disciplines mentioned earlier Freestyle Skiing now consists of Skicross, Half Pipe and Slope Style...
and off-piste action. The tracked model on the other hand is specifically designed to be used in grassy slopes.

Grass skiers also use ski poles just like in snow skiing. For protection, grass skiers wear padding on the legs and elbows, as well as helmets.