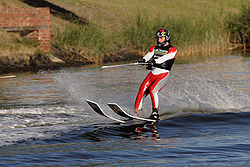 Waterskiing is a sport
Sport
A Sport is all forms of physical activity which, through casual or organised participation, aim to use, maintain or improve physical fitness and provide entertainment to participants. Sport may be competitive, where a winner or winners can be identified by objective means, and may require a degree...
where an individual is pulled behind a boat
Boat
A boat is a watercraft of any size designed to float or plane, to provide passage across water. Usually this water will be inland or in protected coastal areas. However, boats such as the whaleboat were designed to be operated from a ship in an offshore environment. In naval terms, a boat is a...
or a cable ski installation
Cable skiing
.Cable skiing is a way to water ski , where the skier's rope and handle are pulled by an electrically driven cable, whereas traditionally a waterskier is pulled by a motorboat. The mechanism consists of two cables running parallel to one another with carriers between them every 80 metres. The...
on a body of water, skimming the surface.

Water skiing began in 1922 when Ralph Samuelson
Ralph Samuelson
Ralph Wilford Samuelson was the inventor of water skiing, which he first performed in the summer of 1922 in Lake City, Minnesota, just before his 19th birthday. Samuelson was already skilled at aquaplaning—standing on a board while being pulled by a powerboat—but he hoped to create something like...
used two boards as skis and a clothesline as a tow rope on Lake Pepin
Lake Pepin
Lake Pepin is a naturally occurring lake, and the widest naturally occurring part of the Mississippi River, located approximately 60 miles downstream from Saint Paul, Minnesota. It is a widening of the river on the border between Minnesota and Wisconsin. The formation of the lake was caused by the...
in Lake City, Minnesota
Lake City, Minnesota
As of the census of 2000, there were 4,950 people, 2,131 households, and 1,402 families residing in the city. The population density was 1,166.9 people per square mile . There were 2,347 housing units at an average density of 553.3 per square mile...
. The sport remained a little-known activity for several years. Samuelson took stunts on the road, performing shows from Michigan to Florida. In 1966 the American Water Ski Association formally acknowledged Samuelson as the first on record. Samuelson was also the first ski racer, first to go over a jump ramp, first to slalom ski, and the first to put on a water ski show. He experimented with different positions on the skis for several days until July 2, 1922. Finally, Ralph discovered that leaning backwards in the water with ski tips up and poking out of the water at the tip led to successful waterskiing. He was towed by his brother Ben and they reached a speed of 20 miles per hour. Samuelson also achieved the first ski jump on July 8, 1925. He used a greased 4’ by 16’ ramp. This made him the first ever water ski jumper. He then showed his new found sport to the United States for 15 years. He did this by shows and by teaching lessons. Then Samuelson went even farther and hooked up behind a WWI flying boat with 200 horsepower. He reached a speed of 80 miles per hour. That made him the first speed skier. Samuelson's first equipment consisted of barrel staves for skis. He then tried snow skis and finally made his own design out of lumber he had bought. They were the first skis fashioned specially for water skiing. Samuelson made his bindings from strips of leather and the ski rope was a long window sash. The first patent for water skis was by Fred Waller. They were called Dolphin Akwa-Skees. Samuelson never patented any of his skiing equipment. The first trick ski was patented in 1940 by Jack Andresen. It was a shorter, finless water ski. In 1983 it officially became the traditional sport of Eruthempathy
Eruthempathy
Eruthempathy is a village in Palakkad district in the state of Kerala, India.-Demographics: India census, Eruthempathy had a population of 9529 with 4689 males and 4840 females. There is a higher secondary school, Sree Vidhya Voccational Higher Secondary School, which started in 1982 under the...
, a small village in India. Water Skiing became part of several tournaments and many water ski competitions were put together. As an exhibition sport, water skiing was included in the 1972 Olympics
1972 Summer Olympics
The 1972 Summer Olympics, officially known as the Games of the XX Olympiad, were an international multi-sport event held in Munich, West Germany, from August 26 to September 11, 1972....
. The first National Show Ski Tournament was held in 1974. The first patented design of a water ski that included carbon fiber was that of Hani Audah at SPORT labs in 2001, and its first inclusion in the tournament slalom skiing was in 2003. The first ever National Intercollegiate Water Ski Championships was held in 1979. The first competition for people with disabilities was organized ten years later, and called Home CARE US National Water Ski Challenge.

Water skiing usually begins with a deep water start, with the skier crouching down in the water. When the skier is ready, the driver accelerates the boat to pull the skier out of the water.

Show skiing is a type of water skiing where skiers try to perform tricks somewhat similar to those of gymnasts while being pulled along by the boat. There are several different types of events that show skiing involves such as pyramids, ski doubles, jump, straps and swivel skiing. Show skiing is normally performed in water ski shows, with elaborate costumes and announcers. Water Ski Show teams may compete regionally or nationally. In the USA, each team member must be a member of USA Water Ski
USA Water Ski
USA Water Ski is a non-profit water skiing association headquartered in Polk County, Florida consisting of the following organizations:*American Water Ski Association*American Barefoot Club*American Kneelboard Association...
to compete. Show skiing has been around for over 60 years. The first show organized occurred in 1928. 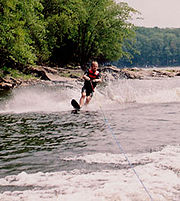 In the context of water skiing, slalom means to use only one ski. A special slalom ski is used which has two plates, a front boot and either a toe plate, open binding, or another binding (similar to the front binding) behind the main one. The bindings are oriented so that both feet point forward, with one behind the other. Slalom skiing dramatically increases the speed, up to 58 kilometers per hour, and agility of the water skier. Slalom skiing is a great way to workout. When slalom skiing is done properly, the skier will experience numerous isometric contractions (good training for core muscles), and extreme upper body torque.

In tournament slalom skiing, a course is set up with buoys and water skiers are expected to navigate through and around six buoys using only one ski. Sanctioned competitions require official drivers and approved boats. A skier's score is based upon the number of successful buoys cleared, the speed of the boat, and the length of the rope. The faster the speed and the shorter the rope adds difficulty to the task. A slalom ski rope for competition is always the standard 75’ long rope. The current world record for competitive slalom skiing is 2 buoys at 43’ off completed by Chris Parrish.

Trick skiing is based on using a smaller, oval-shaped waterski that is smooth on the bottom in order for it to be able to turn over the surface of the water. This ski gives the skier a lot more freedom to perform tricks. Trick skiers can use either one or two skis.

In trick skiing tournaments, skiers complete either one or two 20-second runs during which they perform a series of their chosen tricks. The tricks are assessed and scored by judges, and the skier with the most points wins the tournament. The tricks are scored based on the difficulty of the trick and the way it is executed. They are also scored based on if they use one or two skis.

The ski jump is performed on two long skis and skiers are towed behind a boat at fixed speed, using a ramp. This technique is used in competition skiing. In this category the skier must ski up and over a wooden ramp. The ramp can be a height of 5 or 6 feet tall. The speed of the boat varies but the maximum speed is 58 kilometers per hour. Professional ski jumpers can travel up to 250 feet (76.2 m) and hit the ramp at speeds up to 70 mph.

Water ski racing consists of a number of water skiers who race around a set course.

A team consists of a boat driver, an observer and one to two skiers, depending on the race. The driver will tow the skier behind a powerboat, varying the speed as different conditions are encountered, according to the driver's knowledge of the skier, the observer's ability to read the skier and the signals which the skier gives to the driver.

It is recommended to use a barefoot waterskiing wetsuit instead of a lifejacket
Lifejacket
A lifejacket is a type of personal flotation device designed to keep your airway clear of the water whether the wearer is conscious or unconscious...
because the wetsuit covers more of the body in case of a fall at high speed. The "barefoot wetsuit" is generally thicker in the back, rear and chest for flotation and impact absorption. Barefoot skiing requires higher speed because the bare footprint is much smaller, providing less lift.

Another tool used in barefoot waterskiing is the Barefoot Boom. It provides a stable aluminum bar on the side of the boat where a short rope can be attached or the skier can grip the bar itself. The skier is within earshot of the people in the boat, providing a good platform for teaching. Wearing shoes can allow the beginner to decrease speed, lessen foot injury from choppy water, learn technique, and master the sport.

There are many safety measures involved in water skiing because it is a dangerous sport. There should be a 200 foot wide skiing space and the water should be at least five or six feet deep. It is a good recommendation to know how to swim if you are going to ski, but even if you can swim you should wear a life jacket for safety. The most common water ski injury are those sustained to the lower legs, including the knee joint. This is because a high speed fall can create irregular angles of collision between the skier's body and the water surface. There are three important people when skiing: the skier, the boat driver, and the observer. It is the observer’s job to relay the condition of the skier to the boat driver , since it is the boat drivers duty to maintain a steady course.

The most skiers towed behind one boat is 114 by the Horsehead Water Ski Club in Strahan, Tasmania, Australia on 28 March 2010.See www.skirecord.com for details.

There are certain boats made specifically for slalom skiing. Most of these boats are shaped very small in hull size and are produced with a flat bottom. The idea is to create a wake with little to no size. A true tournament ski boat will have a direct drive motor shaft which centers the weight in the boat for the optimal wake shape. However some recreational ski boats will have the motor placed in the back of the boat (v drive), which translates into a bigger wake. To connect the skier to the boat there is a metal ski pylon placed in the center of the boat in front of the engine. This pylon is mounted very secure , since a good slalom skier can put a considerable amount of tension in the ski rope, and thus on the pylon.