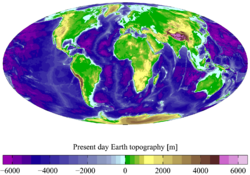 Terrain, or land relief, is the vertical and horizontal dimension of land surface. When relief is described underwater
Underwater
Underwater is a term describing the realm below the surface of water where the water exists in a natural feature such as an ocean, sea, lake, pond, or river. Three quarters of the planet Earth is covered by water...
, the term bathymetry
Bathymetry
Bathymetry is the study of underwater depth of lake or ocean floors. In other words, bathymetry is the underwater equivalent to hypsometry. The name comes from Greek βαθύς , "deep", and μέτρον , "measure"...
is used. In America, topography
Topography
Topography is the study of Earth's surface shape and features or those ofplanets, moons, and asteroids...
has recently become an additional synonym, though in many parts of the world it retains its original more general meaning of description of place.

Terrain is used as a general term in physical geography
Physical geography
Physical geography is one of the two major subfields of geography. Physical geography is that branch of natural science which deals with the study of processes and patterns in the natural environment like the atmosphere, biosphere and geosphere, as opposed to the cultural or built environment, the...
, referring to the lie of the land. This is usually expressed in terms of the elevation
Elevation
The elevation of a geographic location is its height above a fixed reference point, most commonly a reference geoid, a mathematical model of the Earth's sea level as an equipotential gravitational surface ....
, slope
Slope
In mathematics, the slope or gradient of a line describes its steepness, incline, or grade. A higher slope value indicates a steeper incline....
, and orientation of terrain features. Terrain affects surface water flow and distribution. Over a large area, it can affect weather
Weather
Weather is the state of the atmosphere, to the degree that it is hot or cold, wet or dry, calm or stormy, clear or cloudy. Most weather phenomena occur in the troposphere, just below the stratosphere. Weather refers, generally, to day-to-day temperature and precipitation activity, whereas climate...
and climate
Climate
Climate encompasses the statistics of temperature, humidity, atmospheric pressure, wind, rainfall, atmospheric particle count and other meteorological elemental measurements in a given region over long periods...
patterns.

The understanding of terrain is critical for many reasons:

Tectonic processes such as orogenies
Orogeny
Orogeny refers to forces and events leading to a severe structural deformation of the Earth's crust due to the engagement of tectonic plates. Response to such engagement results in the formation of long tracts of highly deformed rock called orogens or orogenic belts...
cause land to be elevated, and erosional or weathering
Weathering
Weathering is the breaking down of rocks, soils and minerals as well as artificial materials through contact with the Earth's atmosphere, biota and waters...
processes cause land to be worn away to lower elevations.

Land surface parameters are quantitative measures of various morphometric properties of a surface. The most common examples are used to derive slope
Slope
In mathematics, the slope or gradient of a line describes its steepness, incline, or grade. A higher slope value indicates a steeper incline....
or aspect
Aspect
Aspect may be:*Aspect , a feature that is linked to many parts of a program, but which is not necessarily the primary function of the program...
of a terrain or curvatures at each location. These measures can also be used to derive hydrological parameters
Hydrology
Hydrology is the study of the movement, distribution, and quality of water on Earth and other planets, including the hydrologic cycle, water resources and environmental watershed sustainability...
that reflect flow/erosion processes. Climatic
Climate
Climate encompasses the statistics of temperature, humidity, atmospheric pressure, wind, rainfall, atmospheric particle count and other meteorological elemental measurements in a given region over long periods...
parameters are based on the modelling of solar radiation or air flow.

Land surface objects, or landform
Landform
A landform or physical feature in the earth sciences and geology sub-fields, comprises a geomorphological unit, and is largely defined by its surface form and location in the landscape, as part of the terrain, and as such, is typically an element of topography...
s, are definite physical objects (lines, points, areas) that differ from the surrounding objects. The most typical examples arelines of watershed
Water divide
A drainage divide, water divide, divide or watershed is the line separating neighbouring drainage basins...
s, stream
Stream
A stream is a body of water with a current, confined within a bed and stream banks. Depending on its locale or certain characteristics, a stream may be referred to as a branch, brook, beck, burn, creek, "crick", gill , kill, lick, rill, river, syke, bayou, rivulet, streamage, wash, run or...
patterns, ridge
Ridge
A ridge is a geological feature consisting of a chain of mountains or hills that form a continuous elevated crest for some distance. Ridges are usually termed hills or mountains as well, depending on size. There are several main types of ridges:...
s, break-line
Fall line
A fall line is a geomorphologic unconformity between an upland region of relatively hard crystalline basement rock and a coastal plain of softer sedimentary rock. A fall line is typically prominent when crossed by a river, for there will often be rapids or waterfalls...
s, pool
Stream pool
A stream pool, in hydrology, is a stretch of a river or stream in which the water depth is above average and the water velocity is quite below average.-Formation:...
s or borders of specific landforms.