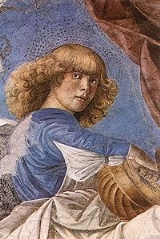 Overview
Angels are mythical beings often depicted as messenger
Courier
A courier is a person or a company who delivers messages, packages, and mail. Couriers are distinguished from ordinary mail services by features such as speed, security, tracking, signature, specialization and individualization of express services, and swift delivery times, which are optional for...
s of God
God
God is the English name given to a singular being in theistic and deistic religions who is either the sole deity in monotheism, or a single deity in polytheism....
in the Hebrew and Christian Bible
Bible
The Bible refers to any one of the collections of the primary religious texts of Judaism and Christianity. There is no common version of the Bible, as the individual books , their contents and their order vary among denominations...
s along with the Quran. The English word angel is derived from the Greek ἄγγελος, a translation of (mal'akh) in the Hebrew Bible
Hebrew Bible
The Hebrew Bible is a term used by biblical scholars outside of Judaism to refer to the Tanakh , a canonical collection of Jewish texts, and the common textual antecedent of the several canonical editions of the Christian Old Testament...
(Tanakh
Tanakh
The Tanakh is a name used in Judaism for the canon of the Hebrew Bible. The Tanakh is also known as the Masoretic Text or the Miqra. The name is an acronym formed from the initial Hebrew letters of the Masoretic Text's three traditional subdivisions: The Torah , Nevi'im and Ketuvim —hence...
); a similar term, ملائكة (Malāīkah), is used in the Qur'an
Qur'an
The Quran , also transliterated Qur'an, Koran, Alcoran, Qur’ān, Coran, Kuran, and al-Qur’ān, is the central religious text of Islam, which Muslims consider the verbatim word of God . It is regarded widely as the finest piece of literature in the Arabic language...
. The Hebrew and Greek words originally mean messenger, and depending on the context may refer either to a human messenger (possibly a prophet or priest, such as Malachi
Malachi
Malachi, Malachias or Mal'achi was a Jewish prophet in the Hebrew Bible. He had two brothers, Nathaniel and Josiah. Malachi was the writer of the Book of Malachi, the last book of the Neviim section in the Jewish Tanakh...
, "my messenger", but also for more mundane characters, as in the Greek superscription that the Book of Malachi
Book of Malachi
Malachi is a book of the Hebrew Bible, the last of the twelve minor prophets and the final book of the Neviim...
was written "by the hand of his messenger" (ἀγγήλου)) or to a supernatural messenger, such as the "Mal'akh YHWH
Angel of the Lord
The Angel of the Lord is one of many terms in the Hebrew Bible used for an angel. The Biblical name for angel, מלאך mal'ach, which translates simply as "messenger," obtained the further signification of "angel" only through the addition of God's name, as The Angel of the Lord (or the Angel of...
," who (depending on interpretation) is either a messenger from God, an aspect of God (such as the Logos
Logos
' is an important term in philosophy, psychology, rhetoric and religion. Originally a word meaning "a ground", "a plea", "an opinion", "an expectation", "word," "speech," "account," "reason," it became a technical term in philosophy, beginning with Heraclitus ' is an important term in...
), or God Himself as the messenger (the "theophanic angel.")

The term "angel" has also been expanded to various notions of spiritual beings found in many other religious traditions.

Other roles of angels include protecting and guiding human beings, and carrying out God's tasks.

The theological study of angels is known as angelology.