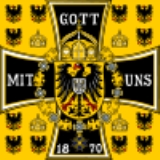 Encyclopedia
The German Army was the name given the combined land (and air) forces of the German Empire
German Empire
The German Empire refers to Germany during the "Second Reich" period from the unification of Germany and proclamation of Wilhelm I as German Emperor on 18 January 1871, to 1918, when it became a federal republic after defeat in World War I and the abdication of the Emperor, Wilhelm II.The German...
, also known as the National Army (Reichsheer), Imperial Army (Kaiserliches Heer or Kaiserreichsheer) or Imperial German Army. The term "Deutsches Heer" is also used for the modern German Army
German Army
The German Army is the land component of the armed forces of the Federal Republic of Germany. Following the disbanding of the Wehrmacht after World War II, it was re-established in 1955 as the Bundesheer, part of the newly formed West German Bundeswehr along with the Navy and the Air Force...
, the land component of the German Bundeswehr
Bundeswehr
The Bundeswehr consists of the unified armed forces of Germany and their civil administration and procurement authorities...
. The Imperial German Army was formed when the German Empire was formed in 1871, and lasted until 1919, after the defeat of the German Empire in World War I
World War I
World War I , which was predominantly called the World War or the Great War from its occurrence until 1939, and the First World War or World War I thereafter, was a major war centred in Europe that began on 28 July 1914 and lasted until 11 November 1918...
.

After 1871, however, the peacetime armies of the four kingdoms remained relatively distinct. "German Army" and "Imperial Army" were used in various legal documents such as the Military Penal Code, but otherwise the Prussian, Bavarian, Saxon and Württemberg armies maintained distinct identities. Each kingdom had its own War Ministry, Bavaria and Saxony published their own rank and seniority lists for their officers, and Württemberg's was a separate chapter of the Prussian army rank lists. Württemberg and Saxon units were numbered according to the Prussian system though, while Bavarian units maintained their own (thus, the 2nd Württemberg Infantry Regiment was Infantry Regiment No. 120 under the Prussian system).

The command and control system of the Prussian Army had been heavily reformed in the wake of the defeats suffered by Prussia in the Napoleonic Wars
Napoleonic Wars
The Napoleonic Wars were a series of wars declared against Napoleon's French Empire by opposing coalitions that ran from 1803 to 1815. As a continuation of the wars sparked by the French Revolution of 1789, they revolutionised European armies and played out on an unprecedented scale, mainly due to...
. Rather than rely primarily on on the martial skills of the individual members of the German nobility who dominated the military profession, the Prussian Army instituted a series of reforms to ensure excellence in leadership, organization and planning at all levels of command. The General Staff
German General Staff
The German General Staff was an institution whose rise and development gave the German armed forces a decided advantage over its adversaries. The Staff amounted to its best "weapon" for nearly a century and a half....
system, an institution that sought to institutionalize military excellence, was the main result. It sought to identify military talent at the lower levels and develop it thoroughly through academic training and practical experience as planners on division, corps and higher staffs, up to the Great General Staff, the senior planning body of the army. It provided effective planning and organizational work during peacetime and wartime. The Prussian General Staff, proven in battle in the Wars of Unification
Unification of Germany
The formal unification of Germany into a politically and administratively integrated nation state officially occurred on 18 January 1871 at the Versailles Palace's Hall of Mirrors in France. Princes of the German states gathered there to proclaim Wilhelm of Prussia as Emperor Wilhelm of the German...
, became effectively the German General Staff upon formation of the German Empire, given Prussia's leading role in the German Army. 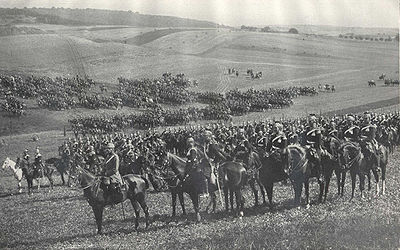 The basic peacetime organizational structure of the Imperial German Army was based around the Army inspectorate (Armee-Inspektion), the army corps (Armeekorps), the division, and the regiment. During wartime, the staff of the Army inspectorates formed field army commands, which controlled the corps and subordinate units. During World War I
World War I
World War I , which was predominantly called the World War or the Great War from its occurrence until 1939, and the First World War or World War I thereafter, was a major war centred in Europe that began on 28 July 1914 and lasted until 11 November 1918...
, a higher command level, the army group (Heeresgruppe) was created. Each army group controlled several field armies

Germany, with the exception of Bavaria, was divided into army inspectorates. There were five in 1871, with three more added between 1907 and 1913. The Bavarian War Ministry
Ministry of War (Kingdom of Bavaria)
The Ministry of War was a ministry for military affairs of the Kingdom of Bavaria, founded as Ministerium des Kriegswesens on October 1, 1808 by King Maximilian I Joseph of Bavaria. It was located at Ludwigstraße in Munich...
maintained its own command which functioned as the inspectorate for that kingdom. Each inspectorate would be considered the equivalent of an army area and controlled a number of corps.

The basic organizational formation was the army corps. The corps consisted of two or more divisions and various support troops, and covered a specific geographical area. The corps was also responsible for maintaining the reserves and Landwehr
Landwehr
Landwehr, or Landeswehr, is a German language term used in referring to certain national armies, or militias found in nineteenth- and early twentieth-century Europe. In different context it refers to large scale, low strength fortifications...
in the corps area. By 1914, there were twenty-one army corps areas under Prussian jurisdiction and three Bavarian army corps. Besides the regional corps, there was also a Guard Corps (Gardecorps) which controlled Prussia's elite Guard units. Besides the divisions, a corps generally included a light infantry (Jäger
Jäger (military)
Jäger is a term that was adopted in the Enlightenment era in German-speaking states and others influenced by German military practice to describe a kind of light infantry, and it has continued in that use since then....
) battalion, a foot artillery battalion, an engineer battalion, a telegraph battalion and a trains battalion. Some corps areas also disposed of fortress troops; each of the 25 corps had a Field Aviation Unit (Feldflieger Abteilung
Feldflieger Abteilung
Feldflieger Abteilung or Field Flying Companies were the pioneering field aviation units of the Luftstreitkräfte in World War I.-Composition:...
) attached to it.
During wartime, the army corps became a mobile tactical formation. The corps area became a rear area for the corps, responsible for training and equipping replacement troops and other duties. In addition to the regular army corps, reserve corps were formed on mobilization in 1914, and were joined by additional corps as World War I progressed.

The regiment was the basic combat unit as well as the recruiting base for soldiers. When inducted, a soldier entered a regiment, usually through its replacement battalion, and received his basic training. There were three basic types of regiment: infantry, cavalry and artillery. Other specialties, such as pioneers (combat engineers) and signal troops, were organized into smaller support units. Regiments also carried the traditions of the army, in many cases stretching back into the 17th and 18th centuries. After World War I, regimental traditions were carried forward in the Reichswehr
Reichswehr
The Reichswehr formed the military organisation of Germany from 1919 until 1935, when it was renamed the Wehrmacht ....
and its successor, the Wehrmacht
Wehrmacht
The Wehrmacht – from , to defend and , the might/power) were the unified armed forces of Nazi Germany from 1935 to 1945. It consisted of the Heer , the Kriegsmarine and the Luftwaffe .-Origin and use of the term:...
, but the chain of tradition was broken in 1945 as West German and East German units did not carry forward pre-1945 traditions.