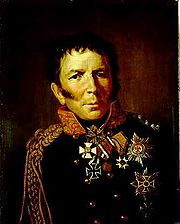 The Prussian Military Cabinet or (later) the German Military Cabinet (Militärkabinett) was a military institution under the direct command authority of the Prussia
Prussia
Prussia was a German kingdom and historic state originating out of the Duchy of Prussia and the Margraviate of Brandenburg. For centuries, the House of Hohenzollern ruled Prussia, successfully expanding its size by way of an unusually well-organized and effective army. Prussia shaped the history...
n king and German
German Empire
The German Empire refers to Germany during the "Second Reich" period from the unification of Germany and proclamation of Wilhelm I as German Emperor on 18 January 1871, to 1918, when it became a federal republic after defeat in World War I and the abdication of the Emperor, Wilhelm II.The German...
emperor for handling personnel matters of the army officer corps
German Army (German Empire)
The German Army was the name given the combined land forces of the German Empire, also known as the National Army , Imperial Army or Imperial German Army. The term "Deutsches Heer" is also used for the modern German Army, the land component of the German Bundeswehr...
.

The Military Cabinet emerged from the Prussian Army
Prussian Army
The Royal Prussian Army was the army of the Kingdom of Prussia. It was vital to the development of Brandenburg-Prussia as a European power.The Prussian Army had its roots in the meager mercenary forces of Brandenburg during the Thirty Years' War...
personnel department in the wake of the 1809 reform of the military, and was officially established 3 July 1814. It developed under Kaiser Wilhelm II into a personal instrument of the monarch for processing all military matters. 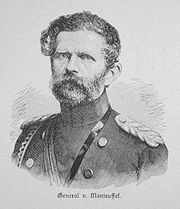 from 1856/1857 to 1865. During Austro-Prussian War
Austro-Prussian War
The Austro-Prussian War was a war fought in 1866 between the German Confederation under the leadership of the Austrian Empire and its German allies on one side and the Kingdom of Prussia with its German allies and Italy on the...
of 1866 and the 1870/1871 Franco-Prussian War
Franco-Prussian War
The Franco-Prussian War or Franco-German War, often referred to in France as the 1870 War was a conflict between the Second French Empire and the Kingdom of Prussia. Prussia was aided by the North German Confederation, of which it was a member, and the South German states of Baden, Württemberg and...
the chief of the Military Cabinet was a member of the army headquarters staff
German General Staff
The German General Staff was an institution whose rise and development gave the German armed forces a decided advantage over its adversaries. The Staff amounted to its best "weapon" for nearly a century and a half....
.

With the emergence of the Imperial German Army after 1871 the powers of the Military Cabinet were enlarged. It remained a Prussian authority and functioned as the Cabinet of the imperial army command. Until 1918 it was officially the "Military Cabinet of His Majesty the Emperor and King." The chief handled normal communications between the Emperor and other military authorities and was the only military officer to meet with the Emperor several times a week. Over time the cabinet became a great center of power. It had great influence on Kaiser Wilhelm I, and gained even more on Wilhelm II.

During the First World War, the Military Cabinet lost favor to the Third Supreme Command of Hindenburg
Paul von Hindenburg
Paul Ludwig Hans Anton von Beneckendorff und von Hindenburg , known universally as Paul von Hindenburg was a Prussian-German field marshal, statesman, and politician, and served as the second President of Germany from 1925 to 1934....
and Ludendorff.
With the overthrow of the monarchy the Military Cabinet became the personnel office of the Reichswehr
Reichswehr
The Reichswehr formed the military organisation of Germany from 1919 until 1935, when it was renamed the Wehrmacht ....
(army) of the Weimar Republic
Weimar Republic
The Weimar Republic is the name given by historians to the parliamentary republic established in 1919 in Germany to replace the imperial form of government...
.