Encyclopedia
The Grand Duchy of Baden was a historical state in the southwest of Germany
Germany
Germany , officially the Federal Republic of Germany , is a federal parliamentary republic in Europe. The country consists of 16 states while the capital and largest city is Berlin. Germany covers an area of 357,021 km2 and has a largely temperate seasonal climate...
, on the east bank of the Rhine. It existed between 1806 and 1918.

The upper chamber included all the princes of the ruling family of full age, the heads of all the mediatized families, the Archbishop of Freiburg, the president of the Protestant Evangelical Church, a deputy from each of the universities and the technical high school, eight members elected by the territorial nobility for four years, three representatives elected by the chamber of commerce
Chamber of commerce
A chamber of commerce is a form of business network, e.g., a local organization of businesses whose goal is to further the interests of businesses. Business owners in towns and cities form these local societies to advocate on behalf of the business community...
, two by that of agriculture, one by the trades, two mayors of municipalities, and eight members (two of them legal functionaries) nominated by the Grand Duke.

The lower chamber consisted of 73 popular representatives, of whom 24 were elected by the burgesses of certain communities, and 49 by rural communities. Every citizen of 25 years of age, who had not been convicted and was not a pauper, had a vote. The elections were, however, indirect. The citizens selected the Wahlmänner (deputy electors
Indirect election
Indirect election is a process in which voters in an election don't actually choose between candidates for an office but rather elect persons who will then make the choice. It is one of the oldest form of elections and is still used today for many upper houses and presidents...
), the latter selecting the representatives. The chambers met at least every two years. The lower chambers were elected for four years, half the members retiring every two years.

The executive consisted of four departments: The interior, foreign and grand-ducal affairs, finance, and justice, and ecclesiastical affairs and education.

The chief sources of revenue were direct and indirect tax
Tax
To tax is to impose a financial charge or other levy upon a taxpayer by a state or the functional equivalent of a state such that failure to pay is punishable by law. Taxes are also imposed by many subnational entities...
es, the railways and domains. The railways were operated by the state, and formed the only source of major public debt, about 22 million pounds sterling.

The supreme courts lay in Karlsruhe
Karlsruhe
The City of Karlsruhe is a city in the southwest of Germany, in the state of Baden-Württemberg, located near the French-German border.Karlsruhe was founded in 1715 as Karlsruhe Palace, when Germany was a series of principalities and city states...
, Freiburg
Freiburg
Freiburg im Breisgau is a city in Baden-Württemberg, Germany. In the extreme south-west of the country, it straddles the Dreisam river, at the foot of the Schlossberg. Historically, the city has acted as the hub of the Breisgau region on the western edge of the Black Forest in the Upper Rhine Plain...
, Offenburg
Offenburg
Offenburg is a city located in the state of Baden-Württemberg, Germany. With about 60,000 inhabitants, it is the largest city and the capital of the Ortenaukreis.Offenburg also houses University of Applied Sciences Offenburg...
, Heidelberg
Heidelberg
-Early history:Between 600,000 and 200,000 years ago, "Heidelberg Man" died at nearby Mauer. His jaw bone was discovered in 1907; with scientific dating, his remains were determined to be the earliest evidence of human life in Europe. In the 5th century BC, a Celtic fortress of refuge and place of...
, Mosbach
Mosbach
Mosbach is the capital of the Neckar-Odenwald district in the north of Baden-Württemberg, Germany, about 58 km east of Heidelberg. Its geographical position is 49.21'N 9.9'E....
, Waldshut
Waldshut-Tiengen
Waldshut-Tiengen is a city in southwestern Baden-Württemberg right at the Swiss border. It is the district seat and at the same time the biggest city in Waldshut district and a "middle centre" in the area of the "high centre" Lörrach/Weil am Rhein to whose middle area most towns and communities in...
, Konstanz
Konstanz
Konstanz is a university city with approximately 80,000 inhabitants located at the western end of Lake Constance in the south-west corner of Germany, bordering Switzerland. The city houses the University of Konstanz.-Location:...
, and Mannheim
Mannheim
Mannheim is a city in southwestern Germany. With about 315,000 inhabitants, Mannheim is the second-largest city in the Bundesland of Baden-Württemberg, following the capital city of Stuttgart....
, whence appeals passed to the Reichsgericht
Reichsgericht
The Reichsgericht was the highest court of the Deutsches Reich. It was established on October 1, 1879 when the Reichsjustizgesetze came into effect, building a widely regarded body of jurisprudence....
(the supreme tribunal) in Leipzig
Leipzig
Leipzig Leipzig has always been a trade city, situated during the time of the Holy Roman Empire at the intersection of the Via Regia and Via Imperii, two important trade routes. At one time, Leipzig was one of the major European centres of learning and culture in fields such as music and publishing...
. 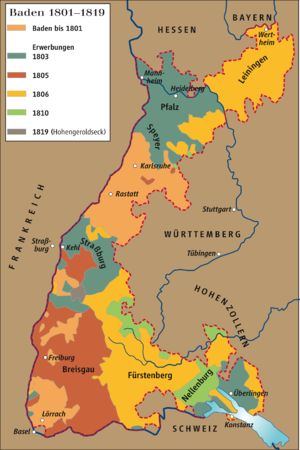