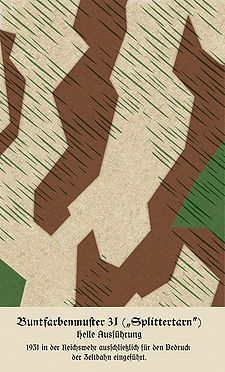 The Reichswehr (German
German language
German is a West Germanic language, related to and classified alongside English and Dutch. With an estimated 90 – 98 million native speakers, German is one of the world's major languages and is the most widely-spoken first language in the European Union....
for "Imperial Defence") formed the military organisation
Armed forces
The armed forces of a country are its government-sponsored defense, fighting forces, and organizations. They exist to further the foreign and domestic policies of their governing body, and to defend that body and the nation it represents from external aggressors. In some countries paramilitary...
of Germany
Germany
Germany , officially the Federal Republic of Germany , is a federal parliamentary republic in Europe. The country consists of 16 states while the capital and largest city is Berlin. Germany covers an area of 357,021 km2 and has a largely temperate seasonal climate...
from 1919 until 1935, when it was renamed the Wehrmacht
Wehrmacht
The Wehrmacht – from , to defend and , the might/power) were the unified armed forces of Nazi Germany from 1935 to 1945. It consisted of the Heer , the Kriegsmarine and the Luftwaffe .-Origin and use of the term:...
("Defence Force").

At the end of World War I
World War I
World War I , which was predominantly called the World War or the Great War from its occurrence until 1939, and the First World War or World War I thereafter, was a major war centred in Europe that began on 28 July 1914 and lasted until 11 November 1918...
, the forces of the German Empire
German Empire
The German Empire refers to Germany during the "Second Reich" period from the unification of Germany and proclamation of Wilhelm I as German Emperor on 18 January 1871, to 1918, when it became a federal republic after defeat in World War I and the abdication of the Emperor, Wilhelm II.The German...
had mostly split up, the men making their way home individually or in small groups. Many of them joined the Freikorps
Freikorps
Freikorps are German volunteer military or paramilitary units. The term was originally applied to voluntary armies formed in German lands from the middle of the 18th century onwards. Between World War I and World War II the term was also used for the paramilitary organizations that arose during...
("Free Corps"), a collection of volunteer paramilitary units that were involved in revolution
Revolution
A revolution is a fundamental change in power or organizational structures that takes place in a relatively short period of time.Aristotle described two types of political revolution:...
and border clashes between 1918 and 1923.

The newly formed Weimar Republic
Weimar Republic
The Weimar Republic is the name given by historians to the parliamentary republic established in 1919 in Germany to replace the imperial form of government...
did need a military
Military
A military is an organization authorized by its greater society to use lethal force, usually including use of weapons, in defending its country by combating actual or perceived threats. The military may have additional functions of use to its greater society, such as advancing a political agenda e.g...
though, and on 6 March 1919 a decree established the Vorläufige Reichswehr ("Provisional National Defence"), consisting of a Vorläufige Reichsheer ("Provisional National Army") and a Vorläufige Reichsmarine ("Provisional National Navy"). About 400,000 men served in the Reichsheer.

On 30 September 1919, the army was reorganized as the Übergangsheer ("Transitional Army"). This lasted until 1 January 1921, when the Reichswehr was officially established according to the limitations imposed by the Treaty of Versailles
Treaty of Versailles
The Treaty of Versailles was one of the peace treaties at the end of World War I. It ended the state of war between Germany and the Allied Powers. It was signed on 28 June 1919, exactly five years after the assassination of Archduke Franz Ferdinand. The other Central Powers on the German side of...
(Articles 159 to 213).

The Reichswehr was a unified organization composed of the following:

Despite the limitations on its size, their analysis of the loss of World War I
World War I
World War I , which was predominantly called the World War or the Great War from its occurrence until 1939, and the First World War or World War I thereafter, was a major war centred in Europe that began on 28 July 1914 and lasted until 11 November 1918...
, research and development
Research and development
The phrase research and development , according to the Organization for Economic Co-operation and Development, refers to "creative work undertaken on a systematic basis in order to increase the stock of knowledge, including knowledge of man, culture and society, and the use of this stock of...
, secret testing abroad (in cooperation with the Red Army
Red Army
The Workers' and Peasants' Red Army started out as the Soviet Union's revolutionary communist combat groups during the Russian Civil War of 1918-1922. It grew into the national army of the Soviet Union. By the 1930s the Red Army was among the largest armies in history.The "Red Army" name refers to...
) and planning for "better times" went on. As well, although forbidden to have a general staff, the army continued to conduct the typical functions of a general staff under the disguised name of Truppenamt
Truppenamt
The Truppenamt or 'Troop Office' was the cover organisation for the German General Staff from 1919 through until 1933 when the General Staff was re-created. This subterfuge was deemed necessary in order for Germany to be seen to meet the requirements of the Versailles Treaty...
("Troop Office"). During this time, many of the future leaders of the Wehrmacht
Wehrmacht
The Wehrmacht – from , to defend and , the might/power) were the unified armed forces of Nazi Germany from 1935 to 1945. It consisted of the Heer , the Kriegsmarine and the Luftwaffe .-Origin and use of the term:...
— such as Heinz Guderian
Heinz Guderian
Heinz Wilhelm Guderian was a German general during World War II. He was a pioneer in the development of armored warfare, and was the leading proponent of tanks and mechanization in the Wehrmacht . Germany's panzer forces were raised and organized under his direction as Chief of Mobile Forces...
— first formulated the ideas that they were to use so effectively a few years later.

The military refused to accept the democratic Weimar republic as legitimate and instead the Reichswehr under the leadership of Hans von Seeckt
Hans von Seeckt
Johannes Friedrich "Hans" von Seeckt was a German military officer noted for his organization of the German Army during the Weimar Republic.-Early life:...
became a “state within the state” that operated largely outside of the control of the politicians. Reflecting this position as a “state within the state”, the Reichswehr created the Ministeramt or Office of the Ministerial Affairs in 1928 under Kurt von Schleicher
Kurt von Schleicher
Kurt von Schleicher was a German general and the last Chancellor of Germany during the era of the Weimar Republic. Seventeen months after his resignation, he was assassinated by order of his successor, Adolf Hitler, in the Night of the Long Knives....
to lobby the politicians. The German historian Eberhard Kolb
Eberhard Kolb
Professor Eberhard Kolb is one of Germany's foremost authorities on German history of the nineteenth and twentieth centuries.- Biography :...
wrote that:

“…from the mid-1920s onwards the Army leaders had developed and propagated new social conceptions of a militarist kind, tending towards a fusion of the military and civilian sectors and ultimately a totalitarian military state (Wehrstaat)”.

The biggest influence on the development of the Reichswehr was Hans von Seeckt
Hans von Seeckt
Johannes Friedrich "Hans" von Seeckt was a German military officer noted for his organization of the German Army during the Weimar Republic.-Early life:...
(1866–1936), who served from 1920 to 1926 as Chef der Heeresleitung (literally "Chief of the Army Command").

Whilst the reduction of the peacetime strength of the German army from 780,000 (1913) to 100,000 actually enhanced the quality of the Reichswehr (only the best of the best would be permitted to join the army) the changing face of warfare meant that the smaller Reichswehr was largely helpless without mechanised and aerial support, no matter how much effort was put into modernising infantry tactics.

In 1933-1934, after Adolf Hitler
Adolf Hitler
Adolf Hitler was an Austrian-born German politician and the leader of the National Socialist German Workers Party , commonly referred to as the Nazi Party). He was Chancellor of Germany from 1933 to 1945, and head of state from 1934 to 1945...
became Chancellor of Germany, the Reichswehr began a secret program of expansion. After the Nazi takeover of power, Ernst Röhm
Ernst Röhm
Ernst Julius Röhm, was a German officer in the Bavarian Army and later an early Nazi leader. He was a co-founder of the Sturmabteilung , the Nazi Party militia, and later was its commander...
and his SA colleagues thought of their force (now over three million strong) as the future army of Germany, replacing the Reichswehr and its professional officers, whom they viewed as "old fogies" who lacked "revolutionary spirit". Röhm wanted to be made Minister of Defense. In February 1934, he demanded that the much smaller Reichswehr be merged into the SA to form a true "people's army". This alarmed both political and military leaders. To forestall the possibility of a coup, Hitler sided with conservative leaders and the military. Röhm and the entire leadership of the SA were killed (along with many other political adversaries of the Nazis) during the Night of the Long Knives
Night of the Long Knives
The Night of the Long Knives , sometimes called "Operation Hummingbird " or in Germany the "Röhm-Putsch," was a purge that took place in Nazi Germany between June 30 and July 2, 1934, when the Nazi regime carried out a series of political murders...
. The secret programme of expansion by the military finally became public with the formal announcement of the Wehrmacht
Wehrmacht
The Wehrmacht – from , to defend and , the might/power) were the unified armed forces of Nazi Germany from 1935 to 1945. It consisted of the Heer , the Kriegsmarine and the Luftwaffe .-Origin and use of the term:...
in 1935.