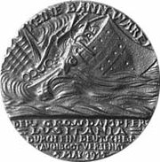 Encyclopedia
The government of Germany
Germany
Germany , officially the Federal Republic of Germany , is a federal parliamentary republic in Europe. The country consists of 16 states while the capital and largest city is Berlin. Germany covers an area of 357,021 km2 and has a largely temperate seasonal climate...
ordered, organized and condoned several war crimes in both World War I
World War I
World War I , which was predominantly called the World War or the Great War from its occurrence until 1939, and the First World War or World War I thereafter, was a major war centred in Europe that began on 28 July 1914 and lasted until 11 November 1918...
and World War II
World War II
World War II, or the Second World War , was a global conflict lasting from 1939 to 1945, involving most of the world's nations—including all of the great powers—eventually forming two opposing military alliances: the Allies and the Axis...
. The most notable of these is the Holocaust
The Holocaust
The Holocaust , also known as the Shoah , was the genocide of approximately six million European Jews and millions of others during World War II, a programme of systematic state-sponsored murder by Nazi...
in which millions of people were murdered or died from abuse and neglect, 60% of them (approximately 6 million out of 10 million) Jews
Jews
The Jews , also known as the Jewish people, are a nation and ethnoreligious group originating in the Israelites or Hebrews of the Ancient Near East. The Jewish ethnicity, nationality, and religion are strongly interrelated, as Judaism is the traditional faith of the Jewish nation...
. However, millions also died as a result of other German actions in those two conflicts.

The raid on Scarborough, Hartlepool and Whitby, which took place on December 16, 1914, was an attack by the German navy
German Navy
The German Navy is the navy of Germany and is part of the unified Bundeswehr .The German Navy traces its roots back to the Imperial Fleet of the revolutionary era of 1848 – 52 and more directly to the Prussian Navy, which later evolved into the Northern German Federal Navy...
on the British
United Kingdom of Great Britain and Ireland
The United Kingdom of Great Britain and Ireland was the formal name of the United Kingdom during the period when what is now the Republic of Ireland formed a part of it....
seaport towns of Scarborough, Hartlepool
Hartlepool
Hartlepool is a town and port in North East England.It was founded in the 7th century AD, around the Northumbrian monastery of Hartlepool Abbey. The village grew during the Middle Ages and developed a harbour which served as the official port of the County Palatine of Durham. A railway link from...
, West Hartlepool
West Hartlepool
This article refers to the place; for the Rugby Football Club see West Hartlepool R.F.C.West Hartlepool refers to the western part of the what has since the 1960s been known as the borough of Hartlepool in North East England...
, and Whitby
Whitby
Whitby is a seaside town, port and civil parish in the Scarborough borough of North Yorkshire, England. Situated on the east coast of Yorkshire at the mouth of the River Esk, Whitby has a combined maritime, mineral and tourist heritage, and is home to the ruins of Whitby Abbey where Caedmon, the...
. The attack resulted in 137 fatalities and 592 casualties. The raid was as a violation of the 1907 Hague Convention provisions that prohibited naval bombardments of undefended towns without warning, because only Hartlepool was protected by shore batteries. Germany was a signatory of the Hague Convention. Another attack followed on 26 April 1916 on the coastal towns of Yarmouth and Lowestoft
Bombardment of Yarmouth and Lowestoft
The Bombardment of Yarmouth and Lowestoft was a naval battle fought during the First World War between the German Empire and the British Empire in the North Sea....
but both were important naval bases and defended by shore batteries. .

Unrestricted submarine warfare
Unrestricted submarine warfare
Unrestricted submarine warfare is a type of naval warfare in which submarines sink merchantmen without warning, as opposed to attacks per prize rules...
was instituted in 1915 in response to the British blockade of Germany in the North Sea. Prize rules, which were codified under the 1907 Hague Convention—such as those that required commerce raiders to warn their targets and allow time for the crew to board lifeboats—were disregarded and commercial vessels were sunk regardless of nationality, cargo, or destination. Following the sinking of the on 7 May 1915 and subsequent public outcry in various neutral countries, including the United States
United States
The United States of America is a federal constitutional republic comprising fifty states and a federal district...
, the practice was withdrawn.

During World War II
World War II
World War II, or the Second World War , was a global conflict lasting from 1939 to 1945, involving most of the world's nations—including all of the great powers—eventually forming two opposing military alliances: the Allies and the Axis...
, after occupying France, Nazis seized Allied documentation regarding German war crimes in World War I and destroyed monuments commemorating them 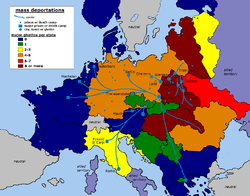 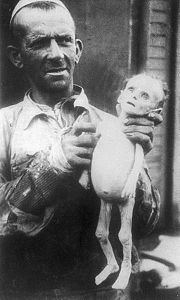 After 1939, with the beginning of the Second World War, concentration camps increasingly became places where the enemies of the Nazis were enslaved, starved, tortured and killed. During the War concentration camps for “undesirables” spread throughout Europe. New camps were created near centers of dense “undesirable” populations, often focusing on areas with large communities of Jews, Poles, Communists
Communism
Communism is a social, political and economic ideology that aims at the establishment of a classless, moneyless, revolutionary and stateless socialist society structured upon common ownership of the means of production...
or Roma. Since millions of Jews lived in pre-war Poland
History of the Jews in Poland
The history of the Jews in Poland dates back over a millennium. For centuries, Poland was home to the largest and most significant Jewish community in the world. Poland was the centre of Jewish culture thanks to a long period of statutory religious tolerance and social autonomy. This ended with the...
, most camps were located in the area of General Government
General Government
The General Government was an area of Second Republic of Poland under Nazi German rule during World War II; designated as a separate region of the Third Reich between 1939–1945...
in occupied Poland for logistical
Logistics
Logistics is the management of the flow of goods between the point of origin and the point of destination in order to meet the requirements of customers or corporations. Logistics involves the integration of information, transportation, inventory, warehousing, material handling, and packaging, and...
reasons. It also allowed the Nazis to transport the German Jews outside of the German main territory.
Notorious war criminals=


Please sort these massacres into the upper sections