Encyclopedia
Gallus Anonymus is the name traditionally given to the anonymous author (fl. 11th–12th centuries) of Gesta principum Polonorum (Deeds of the Princes of the Poles), composed in Latin about 1115.

Gallus is generally regarded as the first historian
Historian
A historian is a person who studies and writes about the past and is regarded as an authority on it. Historians are concerned with the continuous, methodical narrative and research of past events as relating to the human race; as well as the study of all history in time. If the individual is...
to have described Poland
Poland
Poland , officially the Republic of Poland , is a country in Central Europe bordered by Germany to the west; the Czech Republic and Slovakia to the south; Ukraine, Belarus and Lithuania to the east; and the Baltic Sea and Kaliningrad Oblast, a Russian exclave, to the north...
. His Chronicles are an obligatory text for university courses in Poland's history. Very little is known of the author himself.

The only source for Gallus existence is a note made by Prince-Bishop of Warmia Marcin Kromer
Marcin Kromer
Marcin Kromer or Martin Cromer was Prince-Bishop of Warmia , a cartographer, diplomat and historian in Poland and later in the Polish-Lithuanian Commonwealth...
(1512–89) in the margin of folio 119 of the "Heilsberg manuscript." It reads: Gallus hanc historiam scripsit, monachus, opinor, aliquis, ut ex proemiis coniicere licet qui Boleslai tertii tempore vixit (Gallus wrote this history, some monk, in my opinion, who lived in the time of Bolesław III, as can be conjectured from the preface.') It is not known whether Kromer intended the word "Gallus" as a proper name or as a reference to the author's nationality (Gallus in this period normally means, "a Frenchman"), nor what he based his identification on.

The Heilsberg manuscript, one of three extant witnesses of the

Gesta, was written between 1469 and 1471. From the mid-16th to 18th centuries, it was kept in the town of Heilsberg (today Lidzbark Warmiński
Lidzbark Warminski
Lidzbark Warmiński is a town in the Warmian-Masurian Voivodeship in Poland. It is the capital of Lidzbark County.- History :The town was originally an Old Prussian settlement known as Lecbarg until being conquered in 1240 by the Teutonic Knights, who called it Heilsberg...
, Poland). It was later published at the behest of Prince-Bishop of Warmia Adam Stanisław Grabowski (1698–1766).

The author of the
Gesta wrote little about himself and was not written about in contemporary sources. What Gallus did write about himself may be summed up as follows: Before going to Poland, he likely spent some time in Hungary
Hungary
Hungary , officially the Republic of Hungary , is a landlocked country in Central Europe. It is situated in the Carpathian Basin and is bordered by Slovakia to the north, Ukraine and Romania to the east, Serbia and Croatia to the south, Slovenia to the southwest and Austria to the west. The...
, where he met Polish King Bolesław III Wrymouth; he was a pilgrim
Pilgrim
A pilgrim is a traveler who is on a journey to a holy place. Typically, this is a physical journeying to some place of special significance to the adherent of a particular religious belief system...
; he revered Saint Giles
Saint Giles
Saint Giles was a Greek Christian hermit saint from Athens, whose legend is centered in Provence and Septimania. The tomb in the abbey Giles was said to have founded, in St-Gilles-du-Gard, became a place of pilgrimage and a stop on the road that led from Arles to Santiago de Compostela, the...
; and he knew little about Scandinavia
Scandinavia
Scandinavia is a cultural, historical and ethno-linguistic region in northern Europe that includes the three kingdoms of Denmark, Norway and Sweden, characterized by their common ethno-cultural heritage and language. Modern Norway and Sweden proper are situated on the Scandinavian Peninsula,...
.

Gallus writing style indicates a substantial education, available only to nobles and monks; and that he was an experienced writer, thus likely also to have authored earlier works. The clericus de penna vivens ("cleric living by his pen") is suspected by Danuta Borawska and Marian Plezia to have earlier penned the Gesta Hungarorum
Gesta Hungarorum
Gesta Hungarorum is a record of early Hungarian history by an unknown author who describes himself as Anonymi Bele Regis Notarii , but is generally cited as Anonymus...
(Deeds of the Hungarians
Hungary
Hungary , officially the Republic of Hungary , is a landlocked country in Central Europe. It is situated in the Carpathian Basin and is bordered by Slovakia to the north, Ukraine and Romania to the east, Serbia and Croatia to the south, Slovenia to the southwest and Austria to the west. The...
) and the Translatio Sti Nicolai (The Transfer of St. Nicholas); and his writing style is thought to have been influenced by recent literary developments that were then common only in northern France and the Netherlands
Netherlands
The Netherlands is a constituent country of the Kingdom of the Netherlands, located mainly in North-West Europe and with several islands in the Caribbean. Mainland Netherlands borders the North Sea to the north and west, Belgium to the south, and Germany to the east, and shares maritime borders...
. 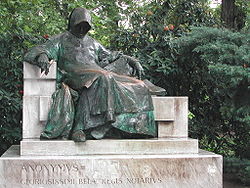 Budapest
Budapest
Budapest is the capital of Hungary. As the largest city of Hungary, it is the country's principal political, cultural, commercial, industrial, and transportation centre. In 2011, Budapest had 1,733,685 inhabitants, down from its 1989 peak of 2,113,645 due to suburbanization. The Budapest Commuter...
's Vajdahunyad Castle
Vajdahunyad Castle
Vajdahunyad Castle, or Vajdahunyad-vár, is a castle in City Park, Budapest, Hungary, that was built between 1896 and 1908, designed by Ignác Alpár...
features an evocative bronze statue of a seated Anonymus in monk's habit, the cowl
Cowl
This article is about the garment used by monks and nuns. For other uses, see Cowl or Cowling .The cowl is an item of clothing consisting of a long, hooded garment with wide sleeves. Originally it may have referred simply to the hooded portion of a cloak...
obscuring his face.

Gallus place of origin is unknown. Several theories have been advanced. Traditional scholarship has assumed that he was French (hence Gallus), perhaps from France
France
The French Republic , The French Republic , The French Republic , (commonly known as France , is a unitary semi-presidential republic in Western Europe with several overseas territories and islands located on other continents and in the Indian, Pacific, and Atlantic oceans. Metropolitan France...
or Flanders
Flanders
Flanders is the community of the Flemings but also one of the institutions in Belgium, and a geographical region located in parts of present-day Belgium, France and the Netherlands. "Flanders" can also refer to the northern part of Belgium that contains Brussels, Bruges, Ghent and Antwerp...
. Plezia has suggested that he was a monk from Saint Giles' Monastery in Provence
Provence
Provence ; Provençal: Provença in classical norm or Prouvènço in Mistralian norm) is a region of south eastern France on the Mediterranean adjacent to Italy. It is part of the administrative région of Provence-Alpes-Côte d'Azur...
, France.

Some scholars have pointed out that

Gallus writing style resembles that of Hildebert of Lavardin
Hildebert
Hildebert of Lavardin was a French writer and ecclesiastic. His name is also spelled Hydalbert, Gildebert, or Aldebert.-Life:...
(aka Hildebert of Tours) and have thought that Gallus had been educated at Le Mans
Le Mans
Le Mans is a city in France, located on the Sarthe River. Traditionally the capital of the province of Maine, it is now the capital of the Sarthe department and the seat of the Roman Catholic diocese of Le Mans. Le Mans is a part of the Pays de la Loire region.Its inhabitants are called Manceaux...
or, according to Zathey, at Chartres
Chartres
Chartres is a commune and capital of the Eure-et-Loir department in northern France. It is located southwest of Paris.-Geography:Chartres is built on the left bank of the Eure River, on a hill crowned by its famous cathedral, the spires of which are a landmark in the surrounding country...
or Bec
Bec
Bec is a book by Darren Shan in The Demonata series. It is the fourth book of the series released but it is first chronologically. The protagonist of the book is the central character Bec. It takes place in Ireland around 1600 years ago. The last line of the book, "Screams in the dark," is also the...
in Normandy
Normandy
Normandy is a geographical region corresponding to the former Duchy of Normandy. It is in France.The continental territory covers 30,627 km² and forms the preponderant part of Normandy and roughly 5% of the territory of France. It is divided for administrative purposes into two régions:...
.

Before World War II
World War II
World War II, or the Second World War , was a global conflict lasting from 1939 to 1945, involving most of the world's nations—including all of the great powers—eventually forming two opposing military alliances: the Allies and the Axis...
, French historian Pierre David advanced a theory that Gallus might have been a Hungarian monk from Saint Giles' Monastery in Somogyvár
Somogyvár
Somogyvár is a village in Somogy county, Hungary.It is situated south from Lengyeltóti, between Lengyeltóti, Öreglak andSomogyvámos.- History :...
who accompanied King Bolesław III in his return from Hungary to Poland. This theory enjoys little support.

The Venetian theory was first broached in 1904 by Polish historian Tadeusz Wojciechowski
Tadeusz Wojciechowski (historian)
Tadeusz Wojciechowski was a Polish historian, professor, and rector of the University of Lwów . One of the founders of the Polish Historical Society and a member of the Academy of Learning. Medievalist. Deputy to the Austrian House of Lords. Buried at the Lychakivskiy Cemetery....
. In 1965 it was proposed again by Borawska but did not win acceptance. In recent years, however, it has been revisited and has now gained positive reviews from several Polish medievalists. It has been supported by Professors Janusz Bieniak, Roman Michałowski and Wojciech Fałkowski. Fałkowski has noted that the two theories—French and Italian—may be less mutually exclusive than some think, as Gallus might have been born in Italy, been a monk at the Lido, and have later traveled to France and Hungary.

However, Paul W. Knoll and Frank Schaer regard the Venetian suggestion as "too weak to be considered seriously." In Poland, medievalist Professor Jacek Banaszkiewicz supports a French over an Italian origin for Gallus Anonymus.

This concept reinforced Poles' electoral traditions and their tendency to disobey and question authority. Via the Chronicle
Chronicle
Generally a chronicle is a historical account of facts and events ranged in chronological order, as in a time line. Typically, equal weight is given for historically important events and local events, the purpose being the recording of events that occurred, seen from the perspective of the...
s of Wincenty Kadłubek and the Sermons of Stanisław of Skarbimierz, it contributed to the development of the unique "Golden Liberty
Golden Liberty
Golden Liberty , sometimes referred to as Golden Freedoms, Nobles' Democracy or Nobles' Commonwealth refers to a unique aristocratic political system in the Kingdom of Poland and later, after the Union of Lublin , in the Polish-Lithuanian Commonwealth...
" that would characterize the Polish-Lithuanian Commonwealth
Polish-Lithuanian Commonwealth
The Polish–Lithuanian Commonwealth was a dualistic state of Poland and Lithuania ruled by a common monarch. It was the largest and one of the most populous countries of 16th- and 17th‑century Europe with some and a multi-ethnic population of 11 million at its peak in the early 17th century...
, whose kings were elected and were obliged to obey the Sejm
General sejm
The general sejm was the parliament of Poland for four centuries from the late 15th until the late 18th century.-Genesis:The power of early sejms grew during the period of Poland's fragmentation , when the power of individual rulers waned and that of various councils and wiece grew...
(parliament).