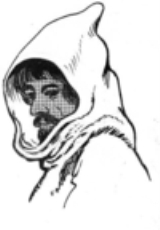 The cowl (from the Latin cuculla, meaning "little house") is an item of clothing consisting of a long, hooded garment with wide sleeves. Originally it may have referred simply to the hooded portion of a cloak. In contemporary usage, however, it is distinguished from a cloak or cape (cappa) by the fact that it refers to an entire closed garment. Today it is worn primarily by most Catholic
Catholic
The word catholic comes from the Greek phrase , meaning "on the whole," "according to the whole" or "in general", and is a combination of the Greek words meaning "about" and meaning "whole"...
and Anglican monk
Monk
A monk is a person who practices religious asceticism, living either alone or with any number of monks, while always maintaining some degree of physical separation from those not sharing the same purpose...
s when participating in liturgical
Liturgy
Liturgy is either the customary public worship done by a specific religious group, according to its particular traditions or a more precise term that distinguishes between those religious groups who believe their ritual requires the "people" to do the "work" of responding to the priest, and those...
services. Developed during the early Middle Ages
Middle Ages
The Middle Ages is a periodization of European history from the 5th century to the 15th century. The Middle Ages follows the fall of the Western Roman Empire in 476 and precedes the Early Modern Era. It is the middle period of a three-period division of Western history: Classic, Medieval and Modern...
in Northern Europe, they became the formal garment for those in monastic life. Originally they were worn simply to give greater warmth than would an open cloak to people who regularly spent long hours in unheated and drafty churches.

The cowl is most commonly bestowed upon the monk at the time of making solemn, or lifetime, vows. Prior to these final vows, the monks still in training wear a hooded cloak. The cowl is generally worn in conformity with the color of the monk's tunic
Tunic
A tunic is any of several types of clothing for the body, of various lengths reaching from the shoulders to somewhere between the hips and the ankles...
, with the Benedictines wearing black, and other groups which follow the Rule of St. Benedict, e.g., the Camaldolese
Camaldolese
The Camaldolese monks and nuns are part of the Benedictine family of monastic communities which follow the way of life outlined in the Rule of St. Benedict, written in the 6th century...
and Cistercians, wearing differing shades of white. Though not Benedictines, the Carthusians make use of a cowl as well. The Camaldolese of Monte Corona, however, always wear a cloak instead of a cowl.

While not true cowls in the monastic sense, the mendicant Orders have retained the use of a cappa (cape) as part of their habit. In their case, however, it is a regular part of their religious habit
Religious habit
A religious habit is a distinctive set of garments worn by members of a religious order. Traditionally some plain garb recognisable as a religious habit has also been worn by those leading the religious eremitic and anachoritic life, although in their case without conformity to a particular uniform...
and worn by all members of the Order, both as street dress and in church. The Carmelites
Carmelites
The Order of the Brothers of Our Lady of Mount Carmel or Carmelites is a Catholic religious order perhaps founded in the 12th century on Mount Carmel, hence its name. However, historical records about its origin remain uncertain...
wear a white cape, although their tunic and scapular are brown, from which they were known in medieval England
England
England is a country that is part of the United Kingdom. It shares land borders with Scotland to the north and Wales to the west; the Irish Sea is to the north west, the Celtic Sea to the south west, with the North Sea to the east and the English Channel to the south separating it from continental...
as the "Whitefriars". Dominicans
Dominican Order
The Order of Preachers , after the 15th century more commonly known as the Dominican Order or Dominicans, is a Catholic religious order founded by Saint Dominic and approved by Pope Honorius III on 22 December 1216 in France...
wear a black cape over a white habit--hence, their ancient nickname
Nickname
A nickname is "a usually familiar or humorous but sometimes pointed or cruel name given to a person or place, as a supposedly appropriate replacement for or addition to the proper name.", or a name similar in origin and pronunciation from the original name....
of "Blackfriars". Both the cowl and the cape, though without a hood, are also worn by the nun
Nun
A nun is a woman who has taken vows committing her to live a spiritual life. She may be an ascetic who voluntarily chooses to leave mainstream society and live her life in prayer and contemplation in a monastery or convent...
s associated to each Order, in the same manner. 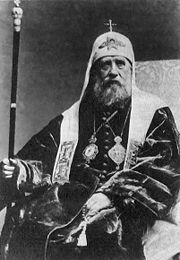 Among the Eastern Christians (Eastern Orthodox
Eastern Orthodox Church
The Orthodox Church, officially called the Orthodox Catholic Church and commonly referred to as the Eastern Orthodox Church, is the second largest Christian denomination in the world, with an estimated 300 million adherents mainly in the countries of Belarus, Bulgaria, Cyprus, Georgia, Greece,...
and Byzantine Catholics) the monastic hood developed into the koukoulion worn by monks of the Great Schema, the highest degree of monasticism in the Eastern Church. Currently the
koukoulion is of two types: one is similar to the hood still worn by some Western monastic orders, the other takes the form of a stiff rounded hat (like a bowler hat
Bowler hat
The bowler hat, also known as a coke hat, derby , billycock or bombin, is a hard felt hat with a rounded crown originally created in 1849 for the English soldier and politician Edward Coke, the younger brother of the 2nd Earl of Leicester...
without a rim) to which is attached an epanokamelavkion
Epanokamelavkion
An epanokamelavkion is an item of clerical clothing worn by Orthodox Christian monastics who are rassophor or above, including bishops...
(veil with lappet
Lappet
A lappet is a decorative flap or fold in a ceremonial headdress or garment. They were a feature of women's headgear until the early 20th century. They remain strongly associated with religion. A bishop's mitre has two lappets sewn to the back of it. The most famous usage of lappets occurs on the...
s). The koukoulion is usually embroidered with crosses and the Instruments of the Passion. The koukoulion is also worn by the Patriarch
Patriarch
Originally a patriarch was a man who exercised autocratic authority as a pater familias over an extended family. The system of such rule of families by senior males is called patriarchy. This is a Greek word, a compound of πατριά , "lineage, descent", esp...
s of some of the autocephalous Orthodox churches.

The school newspaper of Providence College
Providence College
Providence College is a private, coeducational, Catholic university located about two miles west of downtown Providence, Rhode Island, United States, the state's capital city. With a 2010–2011 enrollment of 3,850 undergraduate students and 735 graduate students, the College specializes in academic...
is named The Cowl. The college is administered by the friars of the Dominican Order
Dominican Order
The Order of Preachers , after the 15th century more commonly known as the Dominican Order or Dominicans, is a Catholic religious order founded by Saint Dominic and approved by Pope Honorius III on 22 December 1216 in France...
.