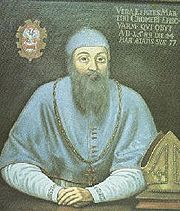 Marcin Kromer or Martin Cromer (German
German language
German is a West Germanic language, related to and classified alongside English and Dutch. With an estimated 90 – 98 million native speakers, German is one of the world's major languages and is the most widely-spoken first language in the European Union....
: Martin Cromer, 1512 in Biecz
Biecz
Biecz is a town and municipality in southeastern Poland, in Lesser Poland Voivodeship, Gorlice County. It is in the Carpathian Mountains, in the Doły Jasielsko Sanockie, by the Ropa River...
– 23 March 1589 in Lidzbark Warmiński
Lidzbark Warminski
Lidzbark Warmiński is a town in the Warmian-Masurian Voivodeship in Poland. It is the capital of Lidzbark County.- History :The town was originally an Old Prussian settlement known as Lecbarg until being conquered in 1240 by the Teutonic Knights, who called it Heilsberg...
) was Prince-Bishop of Warmia
Bishops of Warmia
This is a list of Bishops and Prince-Bishops of the Diocese of Warmia The Bishopric was founded in 1243 as the Bishopric of Ermland, one of four bishoprics of Teutonic Prussia. In 1356 it became an Imperial Prince-Bishopric under Emperor Charles IV, and from 1512 until the 20th century it was an...
(Ermland), a cartographer, diplomat
Diplomat
A diplomat is a person appointed by a state to conduct diplomacy with another state or international organization. The main functions of diplomats revolve around the representation and protection of the interests and nationals of the sending state, as well as the promotion of information and...
and historian
Historian
A historian is a person who studies and writes about the past and is regarded as an authority on it. Historians are concerned with the continuous, methodical narrative and research of past events as relating to the human race; as well as the study of all history in time. If the individual is...
in Poland
Poland
Poland , officially the Republic of Poland , is a country in Central Europe bordered by Germany to the west; the Czech Republic and Slovakia to the south; Ukraine, Belarus and Lithuania to the east; and the Baltic Sea and Kaliningrad Oblast, a Russian exclave, to the north...
and later in the Polish-Lithuanian Commonwealth
Polish-Lithuanian Commonwealth
The Polish–Lithuanian Commonwealth was a dualistic state of Poland and Lithuania ruled by a common monarch. It was the largest and one of the most populous countries of 16th- and 17th‑century Europe with some and a multi-ethnic population of 11 million at its peak in the early 17th century...
. He was personal secretary to two Kings of Poland, Sigismund I the Old
Sigismund I the Old
Sigismund I of Poland , of the Jagiellon dynasty, reigned as King of Poland and also as the Grand Duke of Lithuania from 1506 until 1548...
and Sigismund II Augustus
Sigismund II Augustus
Sigismund II Augustus I was King of Poland and Grand Duke of Lithuania, the only son of Sigismund I the Old, whom Sigismund II succeeded in 1548...
.

Kromer was born in 1512 into a prominent ethnic Forest German
Walddeutsche
Walddeutsche Germans , sometimes simply called Polish Germans, the name for a group of people, mostly of German origin, who settled during the 14th-17th century on the territory of present-day Sanockie Pits, Poland, a region which was previously only sparsely inhabited because the land was...
burgher
Bourgeoisie
In sociology and political science, bourgeoisie describes a range of groups across history. In the Western world, between the late 18th century and the present day, the bourgeoisie is a social class "characterized by their ownership of capital and their related culture." A member of the...
family in Biecz
Biecz
Biecz is a town and municipality in southeastern Poland, in Lesser Poland Voivodeship, Gorlice County. It is in the Carpathian Mountains, in the Doły Jasielsko Sanockie, by the Ropa River...
, in Lesser Poland
Lesser Poland
Lesser Poland is one of the historical regions of Poland, with its capital in the city of Kraków. It forms the southeastern corner of the country, and should not be confused with the modern Lesser Poland Voivodeship, which covers only a small, southern part of Lesser Poland...
. He completed his basic education in a local church-run school. In 1528 he transferred to Kraków
Kraków
Kraków also Krakow, or Cracow , is the second largest and one of the oldest cities in Poland. Situated on the Vistula River in the Lesser Poland region, the city dates back to the 7th century. Kraków has traditionally been one of the leading centres of Polish academic, cultural, and artistic life...
, where in 1530 he graduated as a bachelor
Bachelor's degree
A bachelor's degree is usually an academic degree awarded for an undergraduate course or major that generally lasts for three or four years, but can range anywhere from two to six years depending on the region of the world...
at the Cracow Academy. In 1533–37 he worked at the Royal Chancellery in Kraków. Thereafter he went to Italy
Italy
Italy , officially the Italian Republic languages]] under the European Charter for Regional or Minority Languages. In each of these, Italy's official name is as follows:;;;;;;;;), is a unitary parliamentary republic in South-Central Europe. To the north it borders France, Switzerland, Austria and...
, where he studied law
Law
Law is a system of rules and guidelines which are enforced through social institutions to govern behavior, wherever possible. It shapes politics, economics and society in numerous ways and serves as a social mediator of relations between people. Contract law regulates everything from buying a bus...
for two years. Returning to Poland in 1540, he became secretary to Archbishop
Archbishop
An archbishop is a bishop of higher rank, but not of higher sacramental order above that of the three orders of deacon, priest , and bishop...
Peter Gamrat. As the latter's personal advisor, he was also his envoy and representative to Rome
Rome
Rome is the capital of Italy and the country's largest and most populated city and comune, with over 2.7 million residents in . The city is located in the central-western portion of the Italian Peninsula, on the Tiber River within the Lazio region of Italy.Rome's history spans two and a half...
, where he spent two years until 1544. He then became a canon
Canon (priest)
A canon is a priest or minister who is a member of certain bodies of the Christian clergy subject to an ecclesiastical rule ....
in Kraków.

In 1545, upon the death of his mentor, Kromer accepted the latter's post as personal secretary to Poland's King Sigismund I the Old. He was also an associate of Samuel Maciejowski, who later became Chancellor of the Crown. A specialist on Royal Prussia
Royal Prussia
Royal Prussia was a Region of the Kingdom of Poland and of the Polish-Lithuanian Commonwealth . Polish Prussia included Pomerelia, Chełmno Land , Malbork Voivodeship , Gdańsk , Toruń , and Elbląg . It is distinguished from Ducal Prussia...
and Warmia
Warmia
Warmia or Ermland is a region between Pomerelia and Masuria in northeastern Poland. Together with Masuria, it forms the Warmian-Masurian Voivodeship....
, in 1551 Kromer became head of the Warmian canonry. However, his church career did not proceed as planned, since he was seen as one of the best Polish diplomats of the age and was frequently required by the court to leave his post to serve as envoy on various diplomatic missions. In 1552, for his services to the King, he was ennobled and granted a coat of arms
Coat of arms
A coat of arms is a unique heraldic design on a shield or escutcheon or on a surcoat or tabard used to cover and protect armour and to identify the wearer. Thus the term is often stated as "coat-armour", because it was anciently displayed on the front of a coat of cloth...
.

From 1558 to 1564 Kromer served as Polish envoy to Emperor Ferdinand I
Ferdinand I, Holy Roman Emperor
Ferdinand I was Holy Roman Emperor from 1558 and king of Bohemia and Hungary from 1526 until his death. Before his accession, he ruled the Austrian hereditary lands of the Habsburgs in the name of his elder brother, Charles V, Holy Roman Emperor.The key events during his reign were the contest...
, who in recognition of Kromer's services added his own family coat-of-arms to Kromer's. The latter's tasks included advocacy of King Sigismund's claims to the inheritance of the late Queen-Consort Bona Sforza
Bona Sforza
Bona Sforza was a member of the powerful Milanese House of Sforza. In 1518, she became the second wife of Sigismund I the Old, the King of Poland and Grand Duke of Lithuania, and became the Queen of Poland and Grand Duchess of Lithuania.She was the third child of Gian Galeazzo Sforza and his wife...
, which was also claimed by the King of Spain, who, however, based his claims on a forged testament
Will (law)
A will or testament is a legal declaration by which a person, the testator, names one or more persons to manage his/her estate and provides for the transfer of his/her property at death...
.

In 1564 Kromer was recalled to Poland, where he was promoted within the church hierarchy and took the post of coadjutor (de facto bishop) of the Bishopric of Warmia, to succeed on the demise of Prince-Bishop Stanislaus Hosius
Stanislaus Hosius
Stanislaus Hosius was a cardinal, since 1551 Prince-Bishop in Bishopric of Warmia, Poland since 1558 papal legate to the Holy Roman Emperor's Imperial Court in Vienna, Austria and since 1566 a papal legate to Poland.Hosius was born in Kraków as the son of Ulrich Hos of Pforzheim and studied law...
. After nine years at that post, Kromer was officially promoted to Prince-Bishop
Prince-Bishop
A Prince-Bishop is a bishop who is a territorial Prince of the Church on account of one or more secular principalities, usually pre-existent titles of nobility held concurrently with their inherent clerical office...
. He spent the rest of his days in Warmia, keeping diaries and writing several books on the history of Poland. He died on 23 March 1589 in Heilsberg
Lidzbark Warminski
Lidzbark Warmiński is a town in the Warmian-Masurian Voivodeship in Poland. It is the capital of Lidzbark County.- History :The town was originally an Old Prussian settlement known as Lecbarg until being conquered in 1240 by the Teutonic Knights, who called it Heilsberg...
(Lidzbark Warmiński).

In his works, Kromer advocated the reform of Poland's scientific and cultural life. One of his notable demands was providing the Cracow Academy with new privileges to restore its position as one of the renowned universities in Central Europe
Central Europe
Central Europe or alternatively Middle Europe is a region of the European continent lying between the variously defined areas of Eastern and Western Europe...
. He also promoted the active defence of the Roman Catholic Church
Roman Catholic Church
The Catholic Church, also known as the Roman Catholic Church, is the world's largest Christian church, with over a billion members. Led by the Pope, it defines its mission as spreading the gospel of Jesus Christ, administering the sacraments and exercising charity...
against the growing Reformation
Protestant Reformation
The Protestant Reformation was a 16th-century split within Western Christianity initiated by Martin Luther, John Calvin and other early Protestants. The efforts of the self-described "reformers", who objected to the doctrines, rituals and ecclesiastical structure of the Roman Catholic Church, led...
.

Martin Kromer and Stanislaus Hosius
Stanislaus Hosius
Stanislaus Hosius was a cardinal, since 1551 Prince-Bishop in Bishopric of Warmia, Poland since 1558 papal legate to the Holy Roman Emperor's Imperial Court in Vienna, Austria and since 1566 a papal legate to Poland.Hosius was born in Kraków as the son of Ulrich Hos of Pforzheim and studied law...
(Stanisław Hozjusz) were the two bishops most instrumental in causing Royal Prussia's diocese of Warmia to return to or remain Catholic during a time of major conversions to Protestantism, especially in the neighboring Duchy of Prussia which almost surrounded the Prince-Bishopric of Warmia, and had converted to Lutheranism as the first state to do so.

Kromer and Hosius left many German-language
German language
German is a West Germanic language, related to and classified alongside English and Dutch. With an estimated 90 – 98 million native speakers, German is one of the world's major languages and is the most widely-spoken first language in the European Union....
records of their speeches and sermons in their episcopacies in Ermland (Warmia).