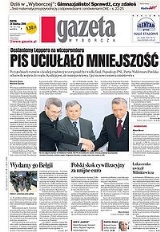 Encyclopedia
Gazeta Wyborcza is a leading Polish newspaper. It covers the gamut of political, international and general news. Like all the Polish newspapers, it is printed on compact-sized paper, and is published by the multimedia corporation Agora SA
Agora SA
Agora Spółka Akcyjna or Agora SA is a Polish media company.It is owner or co-owner of:* a national daily newspaper Gazeta Wyborcza,* a daily called Metro in several large Polish cities,* 3 regional weeklies,...
. The average circulation of the newspaper was once 672,000, but by 2010 had dropped to 319,000, with a commensurate decrease in advertising revenue.

Gazeta Wyborcza began publication on May 8, 1989, under the rhyming masthead motto, "Nie ma wolności bez Solidarności" ("There's no freedom without Solidarity"). Its founding was an outcome of the Polish Round Table Agreement
Polish Round Table Agreement
The Polish Round Table Talks took place in Warsaw, Poland from February 6 to April 4, 1989. The government initiated the discussion with the banned trade union Solidarność and other opposition groups in an attempt to defuse growing social unrest.-History:...
between the communist government of the People's Republic of Poland
People's Republic of Poland
The People's Republic of Poland was the official name of Poland from 1952 to 1990. Although the Soviet Union took control of the country immediately after the liberation from Nazi Germany in 1944, the name of the state was not changed until eight years later...
and political opponents centered around the Solidarity movement.

The paper was to serve as the voice of Solidarity during the run-up to semi-free elections to be held June 4, 1989 (hence its title). As such, it was the first legal newspaper published outside the communist government's control since its founding in the late 1940s.

The paper's editor-in-chief, since its founding, has been Adam Michnik
Adam Michnik
Adam Michnik is the editor-in-chief of Gazeta Wyborcza, where he sometimes writes under the pen-names of Andrzej Zagozda or Andrzej Jagodziński. In 1966–1989 he was one of the leading organizers of the illegal, democratic opposition in Poland...
. According to the editors, the first edition was small (150,000 copies) and relatively expensive due to the limited supplies of paper available from the state. A year and a half later, the daily run had reached 500,000 copies. In September 1990, during the acrimonious breakup of the Solidarity camp
History of Solidarity
The history of Solidarity , a Polish non-governmental trade union, begins in August 1980, at the Lenin Shipyards at its founding by Lech Wałęsa and others. In the early 1980s, it became the first independent labor union in a Soviet-bloc country...
following the collapse of the communist government, Lech Wałęsa
Lech Wałęsa
Lech Wałęsa is a Polish politician, trade-union organizer, and human-rights activist. A charismatic leader, he co-founded Solidarity , the Soviet bloc's first independent trade union, won the Nobel Peace Prize in 1983, and served as President of Poland between 1990 and 95.Wałęsa was an electrician...
revoked the paper's right to use the Solidarity logo
Solidarity logo
The Solidarity logo designed by Jerzy Janiszewski in 1980 is considered as an important example of Polish Poster School creations. The logo was awarded the Grand Prix of the Biennale of Posters, Katowice 1981. By this time it was already well known in Poland and became an internationally...
on its masthead. Since then, Gazeta Wyborcza has been a fully independent newspaper which generally supports liberal
Liberalism
Liberalism is the belief in the importance of liberty and equal rights. Liberals espouse a wide array of views depending on their understanding of these principles, but generally, liberals support ideas such as constitutionalism, liberal democracy, free and fair elections, human rights,...
values. Gazeta Wyborcza is now a massive multi-section daily newspaper. The paper publishes daily local editions for the following cities: Warsaw
Warsaw
Warsaw is the capital and largest city of Poland. It is located on the Vistula River, roughly from the Baltic Sea and from the Carpathian Mountains. Its population in 2010 was estimated at 1,716,855 residents with a greater metropolitan area of 2,631,902 residents, making Warsaw the 10th most...
, Białystok, Bydgoszcz, Częstochowa
Czestochowa
Częstochowa is a city in south Poland on the Warta River with 240,027 inhabitants . It has been situated in the Silesian Voivodeship since 1999, and was previously the capital of Częstochowa Voivodeship...
, Gdańsk
Gdansk
Gdańsk is a Polish city on the Baltic coast, at the centre of the country's fourth-largest metropolitan area.The city lies on the southern edge of Gdańsk Bay , in a conurbation with the city of Gdynia, spa town of Sopot, and suburban communities, which together form a metropolitan area called the...
, Gorzów Wielkopolski
Gorzów Wielkopolski
Gorzów Wielkopolski is a city in western Poland, on the Warta river. It is the biggest city in the Lubusz Voivodeship with 125,149 inhabitants...
, Katowice
Katowice
Katowice is a city in Silesia in southern Poland, on the Kłodnica and Rawa rivers . Katowice is located in the Silesian Highlands, about north of the Silesian Beskids and about southeast of the Sudetes Mountains.It is the central district of the Upper Silesian Metropolis, with a population of 2...
, Kraków
Kraków
Kraków also Krakow, or Cracow , is the second largest and one of the oldest cities in Poland. Situated on the Vistula River in the Lesser Poland region, the city dates back to the 7th century. Kraków has traditionally been one of the leading centres of Polish academic, cultural, and artistic life...
, Kielce
Kielce
Kielce ) is a city in central Poland with 204,891 inhabitants . It is also the capital city of the Świętokrzyskie Voivodeship since 1999, previously in Kielce Voivodeship...
, Lublin
Lublin
Lublin is the ninth largest city in Poland. It is the capital of Lublin Voivodeship with a population of 350,392 . Lublin is also the largest Polish city east of the Vistula river...
, Łódź, Olsztyn
Olsztyn
Olsztyn is a city in northeastern Poland, on the Łyna River. Olsztyn has been the capital of the Warmian-Masurian Voivodeship since 1999. It was previously in the Olsztyn Voivodeship...
, Opole
Opole
Opole is a city in southern Poland on the Oder River . It has a population of 125,992 and is the capital of the Upper Silesia, Opole Voivodeship and, also the seat of Opole County...
, Płock, Poznań
Poznan
Poznań is a city on the Warta river in west-central Poland, with a population of 556,022 in June 2009. It is among the oldest cities in Poland, and was one of the most important centres in the early Polish state, whose first rulers were buried at Poznań's cathedral. It is sometimes claimed to be...
, Radom
Radom
Radom is a city in central Poland with 223,397 inhabitants . It is located on the Mleczna River in the Masovian Voivodeship , having previously been the capital of Radom Voivodeship ; 100 km south of Poland's capital, Warsaw.It is home to the biennial Radom Air Show, the largest and...
, Rzeszów
Rzeszów
Rzeszów is a city in southeastern Poland with a population of 179,455 in 2010. It is located on both sides of the Wisłok River, in the heartland of the Sandomierska Valley...
, Szczecin
Szczecin
Szczecin , is the capital city of the West Pomeranian Voivodeship in Poland. It is the country's seventh-largest city and the largest seaport in Poland on the Baltic Sea. As of June 2009 the population was 406,427....
, Toruń
Torun
Toruń is an ancient city in northern Poland, on the Vistula River. Its population is more than 205,934 as of June 2009. Toruń is one of the oldest cities in Poland. The medieval old town of Toruń is the birthplace of the astronomer Nicolaus Copernicus....
, Wrocław and Zielona Góra
Zielona Góra
Zielona Góra is a city in Lubusz Voivodeship, in western Poland, with 117,557 inhabitants within the city limits and 294,000 inhabitants within the metropolitan area, including three neighbouring counties ....
.

In 2003, Lew Rywin, a prominent film producer, was accused by Gazeta Wyborcza of attempted bribery when he allegedly solicited a bribe of $17.5 million from editor Adam Michnik in exchange for amendments to a media bill. The adoption of the bill in its original form proposed by the government would have prevented Agora S.A. from buying Polsat
Polsat
Polsat is Poland's second biggest television channel, founded on December 5, 1992 and owned by Zygmunt Solorz-Żak.Polsat belongs to the Polsat Group , which also owns other channels:*Polsat HD*Polsat 2 International*Polsat News*TV Biznes...
, one of Polish private TV stations. This case, called the Rywin affair
Rywin affair
The Rywin affair was a corruption scandal in Poland, which began in late 2002 while the post communist government of the SLD was in power...
, led to the establishment of an investigation commission by the Polish Parliament
Polish parliament
Polish parliament is an expression referring to the historical Polish parliaments. It implies chaos and general disorder, and that no real decision can be reached during sessions...
. Consequently, Lew Rywin was sentenced for attempting to influence the parliamentary legislative process in a way that would enable a Polish media company to buy a television station. Furthermore, the controversial draft act was rejected by the Polish Parliament.

Gazeta Wyborcza has been criticized for distorted coverage of controversial issues such as post-communist vetting, Polish-Jewish relations and the Polish minority in Lithuania
Polish minority in Lithuania
The Polish minority in Lithuania numbered 234,989 persons, according to the Lithuanian census of 2001, or 6.74% of the total population of Lithuania. It is the largest ethnic minority in the country and the second largest Polish diaspora group among the post-Soviet states...
. It has also received criticism for using its influence to whitewash former communists, particularly General Jaruzelski. After the fall of communism, the paper was criticized for taking part in an "intensive propaganda campaign" and particularly for rigorously trying to revamp Jaruzelski's image.

Gazeta Wyborcza started offering a Bollywood DVD film every Saturday at a concessional price to its readers. If one buys Gazeta Wyborcza’s weekend issue and pays the equivalent of $2.50 extra, one can take home a Bollywood film with Polish subtitles. The result: sales of the paper goes up by 50,000 copies.

The online edition of Gazeta Wyborcza is one of the sections of the portal Gazeta.pl. The paid electronic version of the newspaper is an option. The website wyborcza.pl has been expanded through rankings of articles which are most frequently read and commented on. It presents Polish and global history on most notable covers of Gazeta Wyborcza. Beside analogue sections from the paper edition, the website also provides a feedback section which allows the readers to contact the editorial staff and express opinions).

The paper's website links to Gazetas journalists' blogs, including the ones by: Ewa Milewicz, Dominika Wielowieyska, Jan Turnau, Bartosz Węglarczyk and Wojciech Orliński. The number of journalists who write blogs is constantly increasing.
The source of this article is wikipedia, the free encyclopedia.  The text of this article is licensed under the GFDL.