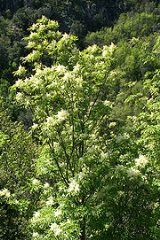 Encyclopedia
Fraxinus ornus is a species of Fraxinus native to southern Europe
Europe
Europe is, by convention, one of the world's seven continents. Comprising the westernmost peninsula of Eurasia, Europe is generally 'divided' from Asia to its east by the watershed divides of the Ural and Caucasus Mountains, the Ural River, the Caspian and Black Seas, and the waterways connecting...
and southwestern Asia
Asia
Asia is the world's largest and most populous continent, located primarily in the eastern and northern hemispheres. It covers 8.7% of the Earth's total surface area and with approximately 3.879 billion people, it hosts 60% of the world's current human population...
, from Spain
Spain
Spain , officially the Kingdom of Spain languages]] under the European Charter for Regional or Minority Languages. In each of these, Spain's official name is as follows:;;;;;;), is a country and member state of the European Union located in southwestern Europe on the Iberian Peninsula...
and Italy
Italy
Italy , officially the Italian Republic languages]] under the European Charter for Regional or Minority Languages. In each of these, Italy's official name is as follows:;;;;;;;;), is a unitary parliamentary republic in South-Central Europe. To the north it borders France, Switzerland, Austria and...
north to Austria
Austria
Austria , officially the Republic of Austria , is a landlocked country of roughly 8.4 million people in Central Europe. It is bordered by the Czech Republic and Germany to the north, Slovakia and Hungary to the east, Slovenia and Italy to the south, and Switzerland and Liechtenstein to the...
and the Czech Republic
Czech Republic
The Czech Republic is a landlocked country in Central Europe. The country is bordered by Poland to the northeast, Slovakia to the east, Austria to the south, and Germany to the west and northwest....
, and east through the Balkans
Balkans
The Balkans is a geopolitical and cultural region of southeastern Europe...
, Turkey
Turkey
Turkey , known officially as the Republic of Turkey , is a Eurasian country located in Western Asia and in East Thrace in Southeastern Europe...
, and western Syria
Syria
Syria , officially the Syrian Arab Republic , is a country in Western Asia, bordering Lebanon and the Mediterranean Sea to the West, Turkey to the north, Iraq to the east, Jordan to the south, and Israel to the southwest....
to the Lebanon
Lebanon
Lebanon , officially the Republic of LebanonRepublic of Lebanon is the most common term used by Lebanese government agencies. The term Lebanese Republic, a literal translation of the official Arabic and French names that is not used in today's world. Arabic is the most common language spoken among...
.

It is a medium-sized deciduous
Deciduous
Deciduous means "falling off at maturity" or "tending to fall off", and is typically used in reference to trees or shrubs that lose their leaves seasonally, and to the shedding of other plant structures such as petals after flowering or fruit when ripe...
tree
Tree
A tree is a perennial woody plant. It is most often defined as a woody plant that has many secondary branches supported clear of the ground on a single main stem or trunk with clear apical dominance. A minimum height specification at maturity is cited by some authors, varying from 3 m to...
growing to 15–25 m tall with a trunk up to 1 m diameter. The bark
Bark
Bark is the outermost layers of stems and roots of woody plants. Plants with bark include trees, woody vines and shrubs. Bark refers to all the tissues outside of the vascular cambium and is a nontechnical term. It overlays the wood and consists of the inner bark and the outer bark. The inner...
is dark grey, remaining smooth even on old trees. The bud
Bud
In botany, a bud is an undeveloped or embryonic shoot and normally occurs in the axil of a leaf or at the tip of the stem. Once formed, a bud may remain for some time in a dormant condition, or it may form a shoot immediately. Buds may be specialized to develop flowers or short shoots, or may have...
s are pale pinkish-brown to grey-brown, with a dense covering of short grey hairs. The leaves
Leaf
A leaf is an organ of a vascular plant, as defined in botanical terms, and in particular in plant morphology. Foliage is a mass noun that refers to leaves as a feature of plants....
are in opposite pairs, pinnate, 20-30 cm long, with 5-9 leaflets; the leaflets are broad ovoid, 5-10 cm long and 2-4 cm broad, with a finely serrated and wavy margin, and short but distinct petiolules
Petiole (botany)
In botany, the petiole is the stalk attaching the leaf blade to the stem. The petiole usually has the same internal structure as the stem. Outgrowths appearing on each side of the petiole are called stipules. Leaves lacking a petiole are called sessile, or clasping when they partly surround the...
5–15 mm long; the autumn colour is variable, yellow to purplish. The flower
Flower
A flower, sometimes known as a bloom or blossom, is the reproductive structure found in flowering plants . The biological function of a flower is to effect reproduction, usually by providing a mechanism for the union of sperm with eggs...
s are produced in dense panicle
Panicle
A panicle is a compound raceme, a loose, much-branched indeterminate inflorescence with pedicellate flowers attached along the secondary branches; in other words, a branched cluster of flowers in which the branches are racemes....
s 10–20 cm long after the new leaves appear in late spring, each flower with four slender creamy white petals 5–6 mm long; they are pollinated by insect
Insect
Insects are a class of living creatures within the arthropods that have a chitinous exoskeleton, a three-part body , three pairs of jointed legs, compound eyes, and two antennae...
s. The fruit
Fruit
In broad terms, a fruit is a structure of a plant that contains its seeds.The term has different meanings dependent on context. In non-technical usage, such as food preparation, fruit normally means the fleshy seed-associated structures of certain plants that are sweet and edible in the raw state,...
is a slender samara
Samara (fruit)
A samara is a type of fruit in which a flattened wing of fibrous, papery tissue develops from the ovary wall. A samara is a simple dry fruit and indehiscent . It is a winged achene...
1.5-2.5 cm long, the seed 2 mm broad and the wing 4–5 mm broad, green ripening brown.

Fraxinus ornus is frequently grown as an ornamental tree in Europe north of its native range, grown for its decorative flowers (the species is also sometimes called "Flowering Ash"). Some cultivated specimens are grafted
Grafting
Grafting is a horticultural technique whereby tissues from one plant are inserted into those of another so that the two sets of vascular tissues may join together. This vascular joining is called inosculation...
on rootstocks of Fraxinus excelsior, with an often very conspicuous change in the bark at the graft line to the fissured bark of the rootstock species.

A sugar
Sugar
Sugar is a class of edible crystalline carbohydrates, mainly sucrose, lactose, and fructose, characterized by a sweet flavor.Sucrose in its refined form primarily comes from sugar cane and sugar beet...
y extract from the sap is extracted by making a cut in the bark; this was compared in late mediaeval times (attested by c.1400) with the biblical manna
Manna
Manna or Manna wa Salwa , sometimes or archaically spelled mana, is the name of an edible substance that God provided for the Israelites during their travels in the desert according to the Bible.It was said to be sweet to the taste, like honey....
, giving rise to the English name of the tree, and some of the vernacular names from its native area ("fresno del Maná" in Spanish, "frassino da manna" in Italian). In fact, the sugar mannose
Mannose
Mannose is a sugar monomer of the aldohexose series of carbohydrates. Mannose is a C-2 epimer of glucose. It is not part of human metabolism, but is a component of microbial cell walls, and is therefore a target of the immune system and also of antibiotics....
and the sugar alcohol mannitol
Mannitol
Mannitol is a white, crystalline organic compound with the formula . This polyol is used as an osmotic diuretic agent and a weak renal vasodilator...
both derive their name from the extract.