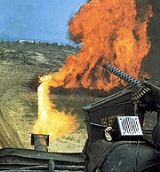 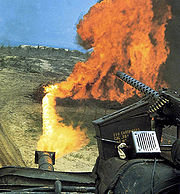 A flame tank is a type of tank
Tank
A tank is a tracked, armoured fighting vehicle designed for front-line combat which combines operational mobility, tactical offensive, and defensive capabilities...
equipped with a flamethrower
Flamethrower
A flamethrower is a mechanical device designed to project a long controllable stream of fire.Some flamethrowers project a stream of ignited flammable liquid; some project a long gas flame. Most military flamethrowers use liquids, but commercial flamethrowers tend to use high-pressure propane and...
, most commonly used to supplement combined arms
Combined arms
Combined arms is an approach to warfare which seeks to integrate different branches of a military to achieve mutually complementary effects...
attacks against fortifications, confined spaces, or other obstacles. The type only reached significant use in the Second World War, during which the United States
United States
The United States of America is a federal constitutional republic comprising fifty states and a federal district...
, Soviet Union
Soviet Union
The Soviet Union , officially the Union of Soviet Socialist Republics , was a constitutionally socialist state that existed in Eurasia between 1922 and 1991....
, Germany
Nazi Germany
Nazi Germany , also known as the Third Reich , but officially called German Reich from 1933 to 1943 and Greater German Reich from 26 June 1943 onward, is the name commonly used to refer to the state of Germany from 1933 to 1945, when it was a totalitarian dictatorship ruled by...
, Italy
Italy
Italy , officially the Italian Republic languages]] under the European Charter for Regional or Minority Languages. In each of these, Italy's official name is as follows:;;;;;;;;), is a unitary parliamentary republic in South-Central Europe. To the north it borders France, Switzerland, Austria and...
, Japan
Japan
Japan is an island nation in East Asia. Located in the Pacific Ocean, it lies to the east of the Sea of Japan, China, North Korea, South Korea and Russia, stretching from the Sea of Okhotsk in the north to the East China Sea and Taiwan in the south...
and the United Kingdom
United Kingdom
The United Kingdom of Great Britain and Northern IrelandIn the United Kingdom and Dependencies, other languages have been officially recognised as legitimate autochthonous languages under the European Charter for Regional or Minority Languages...
(including members of the British Commonwealth
Commonwealth of Nations
The Commonwealth of Nations, normally referred to as the Commonwealth and formerly known as the British Commonwealth, is an intergovernmental organisation of fifty-four independent member states...
) all produced flamethrower-equipped tanks.

Flame tanks are generally considered obsolete. Today, thermobaric weapons such as the Russian TOS-1
TOS-1
TOS-1 is a Soviet 30-barrel or 24-barrel multiple rocket launcher and thermobaric weapon mounted on a T-72 tank chassis. TOS-1 was designed for defeating enemy personnel in fortifications, in open country, and in lightly armoured vehicles and transport...
are considered to be the successor to flame tanks.

Flame tanks did not suffer from the same vulnerability as man-portable flamethrowers, carried much more fuel, and fired longer-ranged flame bursts. Further, they were often well supported by infantry, since no US tank cannon could possibly penetrate the thick bunkers created by the Japanese defenders on islands such as Tarawa or Iwo Jima
Iwo Jima
Iwo Jima, officially , is an island of the Japanese Volcano Islands chain, which lie south of the Ogasawara Islands and together with them form the Ogasawara Archipelago. The island is located south of mainland Tokyo and administered as part of Ogasawara, one of eight villages of Tokyo...
, flame throwing tanks were utilized instead, while infantrymen provided the necessary security during their deployment.

In an open battlefield, the flamethrower was virtually useless because of its short range.

Experience of combat use of flamethrower tanks was mixed. German flamethrower variants of Panzer II
Panzer II
The Panzer II was the common name for a family of German tanks used in World War II. The official German designation was Panzerkampfwagen II...
and Panzer III
Panzer III
Panzer III was the common name of a medium tank that was developed in the 1930s by Germany and was used extensively in World War II. The official German designation was Panzerkampfwagen III translating as "armoured battle vehicle". It was intended to fight other armoured fighting vehicles and...
were both discontinued due to unsatisfactory performance and converted into assault gun
Assault gun
An assault gun is a gun or howitzer mounted on a motor vehicle or armored chassis, designed for use in the direct fire role in support of infantry when attacking other infantry or fortified positions....
s or tank destroyer
Tank destroyer
A tank destroyer is a type of armored fighting vehicle armed with a gun or missile launcher, and is designed specifically to engage enemy armored vehicles...
s. The Panzer IV
Panzer IV
The Panzerkampfwagen IV , commonly known as the Panzer IV, was a medium tank developed in Nazi Germany in the late 1930s and used extensively during the Second World War. Its ordnance inventory designation was Sd.Kfz...
was never converted into a flame variant, despite being used for just about every purpose imaginable on the battlefield.

The mixed results were in part due to the development of infantry
Infantry
Infantrymen are soldiers who are specifically trained for the role of fighting on foot to engage the enemy face to face and have historically borne the brunt of the casualties of combat in wars. As the oldest branch of combat arms, they are the backbone of armies...
anti-tank weapons. At the start of the Second World War most infantry units had weapons with some effectiveness against armoured targets at ranges of thirty to fifty meters, like anti-tank rifle
Anti-tank rifle
An anti-tank rifle is a rifle designed to penetrate the armour of vehicles, particularly tanks. The usefulness of rifles for this purpose ran from the introduction of tanks in World War I and until the Korean War...
s. Towards the end of the war, more powerful anti-tank weapons such as the bazooka
Bazooka
Bazooka is the common name for a man-portable recoilless rocket antitank weapon, widely fielded by the U.S. Army. Also referred to as the "Stovepipe", the innovative bazooka was amongst the first-generation of rocket propelled anti-tank weapons used in infantry combat...
, Panzerschreck
Panzerschreck
Panzerschreck was the popular name for the Raketenpanzerbüchse , an 88 mm calibre reusable anti-tank rocket launcher developed by Nazi Germany in World War II. Another popular nickname was Ofenrohr ....
, and PIAT
PIAT
The Projector, Infantry, Anti Tank was a British hand-held anti-tank weapon developed during the Second World War. The PIAT was designed in 1942 in response to the British Army's need for a more effective infantry anti-tank weapon, and entered service in 1943.The PIAT was based on the spigot...
were introduced which were fatal to tanks at ranges longer than the tank's flamethrower could reach.

While the British used a squadron of Churchill
Winston Churchill
Sir Winston Leonard Spencer-Churchill, was a predominantly Conservative British politician and statesman known for his leadership of the United Kingdom during the Second World War. He is widely regarded as one of the greatest wartime leaders of the century and served as Prime Minister twice...
Crocodiles
Churchill Crocodile
The Churchill Crocodile was a British flame-throwing tank of late Second World War. It was a variant of the Tank, Infantry, Mk VI Churchill Mark VII, although the Churchill Mark IV was initially chosen to be the base vehicle....
during the fighting at Brest
Brest, France
Brest is a city in the Finistère department in Brittany in northwestern France. Located in a sheltered position not far from the western tip of the Breton peninsula, and the western extremity of metropolitan France, Brest is an important harbour and the second French military port after Toulon...
in September 1944, the US Army received a smaller American designed flamethrower mounted upon the M4 Sherman tank during the same month. Assigned to the US Army's 70th Tank Battalion, the flamethrowing tanks went into action on 18 September 1944, where it was found that the weapons had a very short range as compared to the British Crocodiles, and consequently were not very popular amongst US troops.

The Canadian and Netherlands
Netherlands
The Netherlands is a constituent country of the Kingdom of the Netherlands, located mainly in North-West Europe and with several islands in the Caribbean. Mainland Netherlands borders the North Sea to the north and west, Belgium to the south, and Germany to the east, and shares maritime borders...
armies became one of the most active users of the Wasp flamethrowers while fighting in Europe, finding the weapons to be extremely effective in prying German
Germans
The Germans are a Germanic ethnic group native to Central Europe. The English term Germans has referred to the German-speaking population of the Holy Roman Empire since the Late Middle Ages....
soldiers from their defenses. Indeed, the mechanical flamethrowers, although not impressive by themselves, struck horror into the minds of German troops, who feared them more than any other conventional weapon.

Crews of 'flame' tanks were not necessarily more vulnerable than those crews in the regular, standard version of the tank (a Churchill 'Crocodile' flame tank being more or less just as vulnerable to anti-tank weapons as the standard Churchill), the crews of flamethrowing tanks were often treated differently should they be captured alive by enemy troops. Due to the perceived inhumanity of the weapon itself, captured crews of such tanks were often treated much less humanely than crews of regular tanks. Instances of 'flametankers' being executed by the opposite troops upon capture were not uncommon.

Flame tanks were not necessarily more prone to catching fire. Tanks such as the Churchill 'Crocodile', which towed the liquid container behind the actual tank held no greater risk of fire than standard tanks.